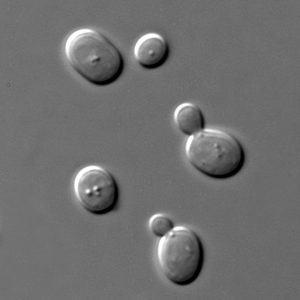 Brewer’s (aka baker’s yeast or commercial yeast), is the organism that is used to make bread rise and produce wine from the fruits of grape. It also is extremely important as a ‘model organism’ in biology. It was the first eukaryote to have its entire genome sequenced and studies using S. cervisiae have been highly significant in developing our understanding of meiosis, mitosis, cancer and a wide variety of cellular phenomena.

In both scientific experimentation and bread/beer making what makes yeast particularly useful is the fact that it is easily cultured—it can be readily grown (i.e. it is not fussy about growth conditions) and is easy to keep alive/viable (i.e. it is tough to kill) and actually can be kept viable under what is often considered harsh conditions — cooling, freezing, drying.  In bread making what is needed is an organism to make carbon dioxide gas which ‘leavens’ dough, releasing carbon dioxide gas into a matrix of hydrated starch and protein molecules (bread dough), thereby producing a product with a light, aerated texture.  Leavening can be accomplished chemically using baking powder or by adding an organism that generates carbon dioxide.  Nearly any organism does this but yeast does it rapidly and predictably.  Moreover it is relatively easy to keep yeast around even when not baking.

Yeast’s role in beer making requires specific abilities that not all organisms possess.  The translation of the scientific name is: saccharo = sugar, myces = fungus, cerevisiae = beer, reflecting its ability to make beer (an alcoholic beverage) out of sugar water. It accomplishes this feat by carrying out a processes termed fermentation, an anaerobic respiration process that releases carbon dioxide while converting six-carbon sugars (glucose and/or fructose) into ethanol.  While a number of organisms can do this, yeast is easy to culture, can grow rapidly, and its behavior is predictable

The name yeast is a morphological term referring to unicellular fungi. Used in this context it does not relate at all to phylogeny. Convergent evolution has resulted in unicellular fungi in several different groups including Zygomycetes (bread molds), Basidiomycetes (club fungi) and Ascomycetes (cup fungi). Most unicellular fungi (yeasts) are ascomycetes but even within this phylum there are yeasts that are not closely related. Commercial yeast (Saccaromyces cervisiae) is an ascomycete, as is fission yeast (Schizosaccharomyces pombe), another yeast used in brewing and also an important model organism with its entire genome sequenced. Although fission yeast and baker’s yeast have a similar ecology and are in the same phylum they are not closely related, having diverged from each other over 300 – 1000 million years ago.

Yeasts in general are unicellular fungi and in form and size very similar to bacteria. Like all fungi, they have a cell wall composed of chitin and possess a nucleus and other organelles, in particular, mitochondria.  In many ways they represent fungi that have evolved to become ‘bacteria-like’ in their form and ecology. Baker’s yeast is typical of yeasts in generally — they typically are roughly spherical and around 5 um in diameter. 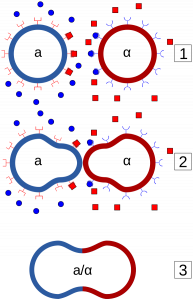 Brewer’s yeast primarily reproduces asexually, by ‘budding’, which is basically cell division but where the daughter cell starts as an outgrowth (bud) of the parent cell and eventually separates. Brewer’s (and fission) yeast are capable of sex when the diploid cells undergo meiosis, forming cells that can fuse with each other (i.e. serve as gametes) to restore the diploid condition. Both fission yeast and commercial yeast can occur as haploid or diploid cultures. Haploid cultures can be maintained by not bringing together different mating strains, while diploid cultures can be maintained because specific culture conditions (nitrogen starvation) are needed to bring about meiosis. When haploid cells of different mating strains encounter each other, chemical communication (pheromones) trigger the production of extensions (‘Shmoo’s’) that allow cells to fuse with each other (plasmogamy). In the diagram above the blue ‘a’ strain produces a mobile chemical (pheromone) designated by the blue circles and has receptors (red ‘football goalposts’) that can bind the pheromone (red squares) produced by red ‘alpha’ strain. Similarly, the red alpha strain has receptors for the pheromone produced by the blue ‘a’ strain. In both strains the binding of pheromones produced by compatible strains induces the production of a schmoo and the eventual creation of a diploid cell.

Saccharomyces is a heterotroph with a sweet tooth — it prefers living off of simple sugars, although some strains can breakdown sugar polymers, e.g. starch, into simple sugars, thereby broadening its diet. Its mineral needs are obtained by absorbing small organic molecules (amino acids) and minerals like phosphate. Various strains differ in their ability to breakdown organic matter and absorb and metabolize nutrients; these features may be useful in genetic/cell biology experiments.

Obviously yeast have significant interactions with humans in providing food products and beverages. The ‘native habitat’ of both brewer’s yeast and fission yeast is the skins of sugar containing fruits such as grapes, apples and pears, making the ‘invention’ of wine-making relatively easy. In addition to ethanol, genetically engineered yeast are used to produce a variety of compounds including insulin. While brewer’s yeast is non-pathogenetic some yeast species can cause disease in humans and other organisms.