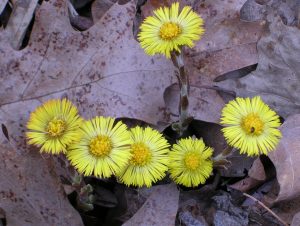 Tussilago farafara is a common herbaceous plant throughout much of North America, occurring in disturbed habitats, usually in relatively moist sites.  It is one of the first flowers to be found in the spring, often on roadsides.  Like many familiar plants (e.g. milkweed, goldenrod, tulips, dahlias) it is an herbaceous perennial but its phenology is unusual, flowering before leaves are produced.

Colts foot is a flowering seed plant (an angiosperm) in the Aster family (Asteraceae) , one of the largest families of flowering plants. The group is usually easy to recognize when flowering because the ‘flower’ is actually an inflorescence, a cluster of flowers. The flowers are often of two types: flowers with elongate petals radiating outward and flowers with short petals that are vertical. Coltsfoot and many familiar members of the family (sunflowers, asters, daisy) have both types of flowers but other members of the family (dandelion, chicory) may only have one of the two types of flowers.

Coltsfoot is a perennial that spreads extensively by underground stems (rhizomes) that produce shoots that live for two years. The first year the shoots are vegetative and produce a cluster of large leaves with grayish hairs, especially on the lower side. In the fall, flower buds develop at the base of the leaves while the leaves senesce and fall off. The following spring the flower buds (which are actually branch shoots) develop. These branches bear no true leaves, only rudimentary scales, but produce a dandelion-like inflorescence (‘flower’). The flowering shoots emerge very early in the spring  and elongate to produce a gray stem roughly 10 cm long with a yellow ‘flower’ at its end that is the same size and color as dandelion but unlike a dandelion it has both flower types, like an aster. The ‘flower’ develops into a head of fruits, looking again very similar to a dandelion and, like dandelions, the tip of the flowering stalk arches over as the fruit develops and then returns to an erect position after the fruits are mature and ready to be dispersed.

As a typical angiosperm, Coltsfoot reproduces sexually and produces seeds in the ovaries of flowers. The seed contains an embryo that develops from a zygote formed by the union of a male gamete derived from pollen and a female gamete produced in the female gametophytes (embryo sacs) that are present in the ovules of the flower. The center flowers of a head do not have ovules while the outer flowers possess both male and female parts. The plants are self-incompatible and need pollen from another plant in order to set seed. Pollen transfer is accomplished by bees and beetles attracted to the flowers by nectar rewards and scent.

Coltsfoot is a typical photosynthetic autotroph.  Carbohydrates, synthesized in the summer are stored in the rhizomes to provide both matter and energy in the spring when there are no leaves and no photosynthesis.  This is an excellent example of plant growth that is accompanied by no increase (actually a decrease) in plant weight.  The rhizomes are depleted of carbohydrates, and therefore lose weight, in order to power the growth of the developing flowers.

Native to Europe, coltsfoot has established itself in North America. While it generally is found in disturbed (‘weedy’) habitats, it occasionally invades ‘natural’ habitats as well.