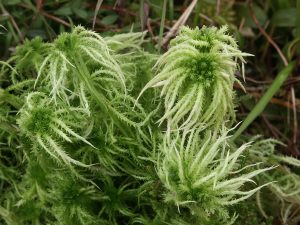 The genus Sphagnum is by far the most important non-vascular plant group on earth. The 120 species in the genus are primarily found in cool, moist habitats, mostly in the Northern Hemisphere (northern U.S., Canada, northern Ireland, Scotland, northern Europe, Siberia) but some do occur in the southern part of the Southern Hemisphere (Chile, New Zealand). The genus is important because it can dominate large areas and change conditions at these sites, making them less hospitable for some species and more hospitable for others. 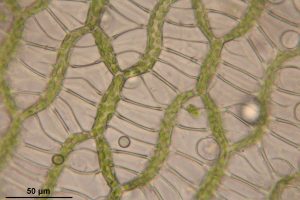 The gametophyte (haploid form) generally occurs in dense mats. Individual plants may be quite long, over 30 cm, but this is including the slowly decomposing basal parts, with the green portion typically 10 cm or less. Plants are erect and have a cluster of branches near the top that give it a characteristic look. The leaves of sphagnum consist of strands of narrow living cells with abundant chloroplasts, surrounding bands of much larger cells that quickly die after being produced. The ability of sphagnum to hold so much water is related both to the large quantity of non-living cells that can absorb water and also to the fact that the mat of plants itself can hold water in between individual plants.

The sporophyte is less commonly seen and includes a roughly spherical capsule that opens explosively to release spores. In most mosses ( e.g. Polytrichium) the sporophytes (the diploid part) have two components: a stalk and a capsule situated at the top of the stalk. However, in Sphagnum the sporophyte is solely the capsule and the stalk that it sits on is haploid and part of  the gametophyte.

Sphagnum exhibits the typical alternation of generations found in mosses, with a haploid gamete producing plant (gametophyte) that is relatively large, long-lived and noticeable, and a much smaller, shorter-lived diploid sporophyte that is produced on the gametophyte, produces spores, and then is shed.

Sphagnum is a photosynthetic autotroph, it makes food (carbohydrate) through the process of photosynthesis and then uses this carbohydrate both as a material to make biomoleules and also to provide energy for metabolic activities. For the gametophyte this is true throughout its existence. Although the sporophyte of many mosses is green and photosynthetic early in its development, most of the photosynthetic surface is in the stalk.  For Sphagnum sporophytes with no stalk, the sporophyte contributes little or no carbohydrates to its livelihood and is totally dependent upon the gametophyte throughout its existence.

Mineral nutrition of mosses is different from that of vascular plants, whose roots obtain obtain nutrients from the soil solution. The source of mineral nutrition for most mosses is not the soil, it is precipitation (sometimes altered in chemistry as it flows down tree trunks) and dust. This is especially true for sphagnum moss because it generally occurs as a carpet sitting on top of a large mat of poorly decomposed material (usually sphagnum plants themselves). At least some species of sphagnum are unusual in their ability to use amino acids as a source of nitrogen in addition to nitrate and ammonia.

Sphagnum interacts with other species a number of ways. Most significant is its ability to alter water and nutrient conditions on a site. Specifically, sphagnum can make areas of land waterlogged, acidic and nutrient poor. This is advantageous for sphagnum because it eliminates competitors that might shade out the sphagnum. It is also significant for other species (e.g. pitcher plants and sundews) that thrive in open, waterlogged habitats, again because potential competitors are kept at bay. Interestingly, not only can sphagnum make terrestrial habitats waterlogged it can also make aquatic habitats (e.g. ponds) somewhat terrestrial, by growing across the surface and producing a mat capable of supporting terrestrial plants, although the habitat is waterlogged and not truly terrestrial.

The remnants of bogs are often ‘mined’ for the un-decomposed material, called peat, that can be used as a fuel source.  Like coal and oil, the energy captured in photosynthesis is still available in the peat because the plant material has not been oxidized in cellular respiration of decomposer organisms.  Dried peat is also a common soil additive in gardening.