Agaricus bisporus, is the most familiar mushroom for most of us — it is the commercial mushroom sold in grocery stores and put on pizza. It comes in various forms: button versions, brown versions and large portobello versions — all of which are varieties of the same species. Its popularity is not so much a consequence of flavor as it is a consequence of its suitability for commercial production. Agaricus does grow wild, typically in fields or lawns but all of the Agaricus mushrooms sold in stores are grown on a controlled medium and in a controlled environment, often in caves or underground structures, not so much for the darkness but because of constant temperatures and high humidities. 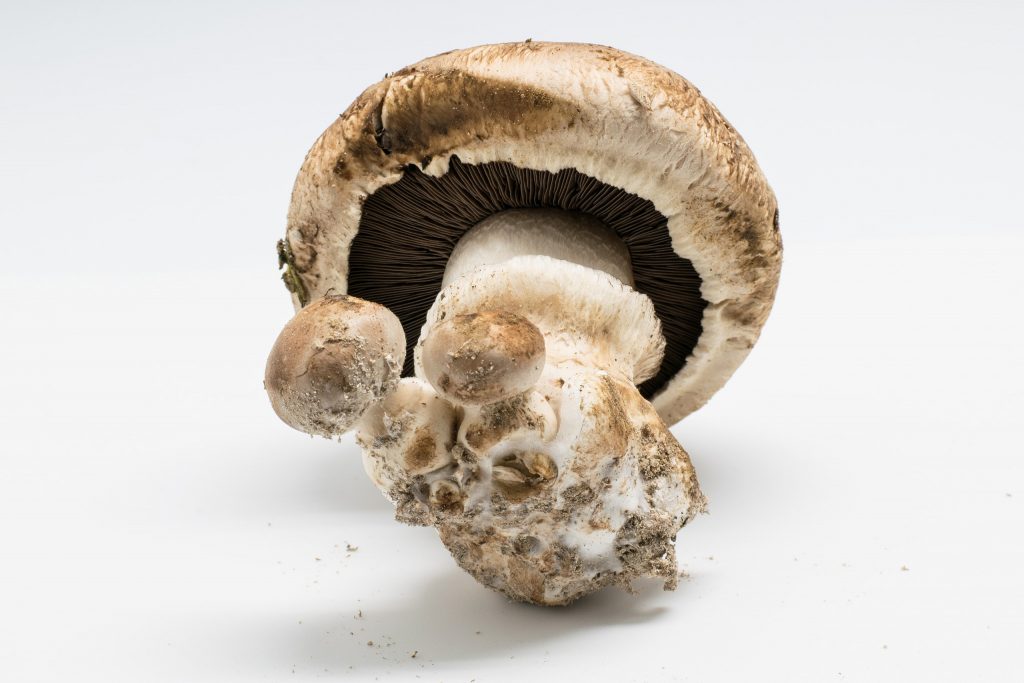 Agaricus, and nearly all of the fungi that would be described as mushrooms, i.e. that produce stalked structures with a cap, are club fungi = basidiomycete fungi (Phylum Basidiomycota). Most mushrooms have ‘gills’ on the underside of the cap where spores are produced, and Agaricus shows this feature. Historically all mushrooms with gills were put in a taxonomic entity (usually an order, the Agaricales) but recent molecular analysis has demonstrated that gills are not a sound feature on which to base a phylogenetic classification. Although there still is an order Agaricales, named for Agaricus, it does not contain all gilled mushrooms and it does include a number of fungi that do not possess gills.

Like nearly all fungi and nearly all club fungi, the bulk of a mushroom’s structure is a network of branching filaments, one cell thick (hypae), that permeate a substrate.  In the case of  wild Agaricus, the substrate is  the soil; for cultured Agaricus the substrate is a prepared compost, typically manure with other material added to it. In club fungi the filaments are cellular, meaning that there are individual cells delineated by the presence of cross-walls (septa). The septa are not complete but usually have a pore in the middle that allows cytoplasm to move from one cell to another. The fruiting body of Agaricus is a consequence of drastic change in the behavior of hyphae. Instead of growing in a diffuse manner and spreading throughout their environment, they grow close to each other and intertwine, forming a solid structure that emerges from the substrate it is growing in and produces the familiar mushroom structure

Agaricus  completes its sexual cycle  by producing basidiospores on the margins of the gills of the mushroom. Like almost all fungi in the Basidiomycete group, the organism exists primarily in a ‘dikaryon’ state where each cell has two nuclei, one from each parent produced after two haploid hyphae fuse. Only in certain parts of the fruiting body do the two nuclei fuse to form a diploid cell that then undergoes meiosis to produce haploid, ‘sexual’ spores. However, for a mushroom farmer, reproduction of Agaricus is totally asexual. They do not sow spores, instead they use pieces of mycelium (the name given to cluster of hyphae), induce it to grow, and then stimulate it to produce fruiting bodies. Some of the mycelium remains and can be used to continue the process. The mycelium is probably capable of living thousands of years.

Agaricus is a typical heterotroph that feeds upon biomass produced by other living organisms. They secrete enzymes into their environment that break down organic matter into simple forms that can be absorbed into the hyphae and then they re-assemble these materials to make new fungal biomass. Fungi are considered ‘decomposers’, but what is not often appreciated is that their nutrition is the same as predators, herbivores and omnivores (including humans). All are heterotrophs and obtain nutrition by breaking down (decomposing) organic material produced by other organisms. As a result of their activities they make more of themselves (i.e. they could be considered a ‘producer’) but because they break down much more material than they produce they are net ‘decomposers’. 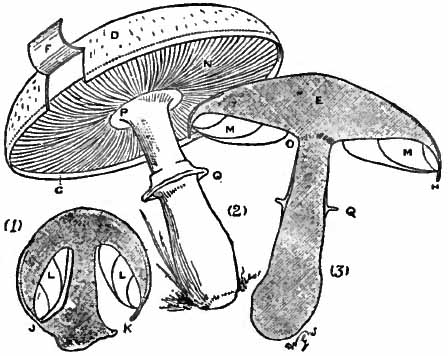 Like most organisms, interactions between Agaricus and other organisms and the physical environment are extremely important to its success. This is reflected in the links below that describe how mushrooms are commercially grown. As described above, Agaricus is known as a ‘secondary decomposer ’— it feeds on material after it has been eaten by ‘primary decomposers’; this is similar to the interaction of cows with the microorganisms in their stomachs. Cows cannot digest grass, they need the microbes to act on the grass (in one of their stomachs) and produce something that they can utilize. Agaricus is also very strongly affected by (i.e. interacts with) physical conditions, in particular temperature, humidity and the concentration of carbon dioxide.  These conditions both control the mycelium to growth rate and also the initiation  of fruiting bodies.