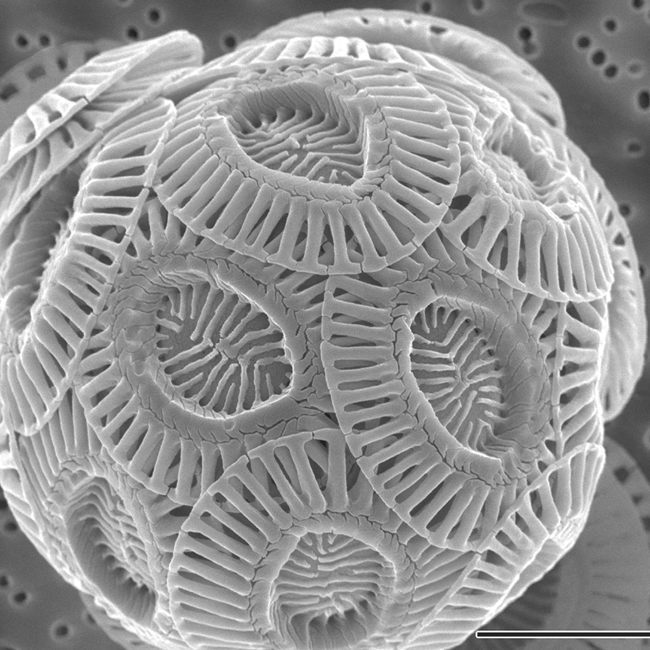 Coccolithophores are some of the most important organisms that you have never heard of!! They are very small marine organisms who have a very significant impact on earth’s geology and ecology. They are distinctive because they have a coating that consists of a number of ornate calcium carbonate plates.

Coccolithophores are closely related to a group of organisms (Haptophytes) that lack the plates. These two groups, together with some other organisms, have been classified a number of different ways. In a five-kingdom classification they are considered to be in the phylum Haptophyta in the kingdom Protista. The coccolithophores are sometimes considered members of the ‘golden algae’ group and some treatments lump ‘golden algae’ (haptophytes including coccolithophores and other groups), brown algae and diatoms together in a group called ‘Stramenopiles’, largely on the basis of pigments. Other workers feel that the pigmentation similarity is an artifact of two independent secondary symbiotic events.

The distinguishing feature of haptophytes is a flagellum-like structure called a haptonema that is distinct from a flagellum due to a different microtubule structure. Most members of this group also have two flagella. Within the Haptophyta, the coccolithophores are distinguished by having an outside boundary of overlapping calcium carbonate plates / shields, called coccoliths. Because they are made of calcium carbonate, coccoliths represent a ‘sink’ for carbon dioxide: the carbon to form them is derived from dissolved carbonate ions, which are (generally) derived from dissolved carbon dioxide, which (generally) is derived from respiring  organisms, either aquatic or terrestrial. What happens to the coccoliths when the organism dies depends on conditions. Under certain conditions they dissolve back into solution, under other conditions they sink to the ocean floor and can form deposits hundreds of meters thick. Such deposits form the dramatic ‘white cliffs of Dover’ and the Alabaster Coast of Normandy.

The primary means of reproduction is asexual cell division. Since both haploid and diploid forms are found, the assumption is that they can undergo the sexual cycle but neither syngamy nor meiosis has been observed. It is believed that some members show a heteromorphic alternation of generations with a diploid, planktonic flagellate stage and a haploid, filamentous stage.

Most members of the group are photosynthetic and autotrophic but some members lack pigments and are heterotrophs; and many of the photosynthetic forms appear capable of absorbing organic material as well as synthesizing it. They are significant in being tolerant of low nutrient conditions and are found in the open oceans where nutrient supplies are very low.

Coccoliths are tremendously important in a number of ways: