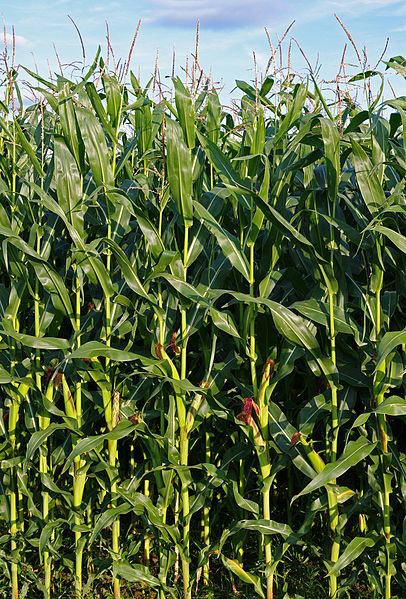 Corn (Zea mays), or maize, is an annual grass crop species that survives only because of its cultivation by humans. Its ancestry tells some interesting tales. For most crop species a wild ‘relative’ is readily apparent. This is not the case for maize but the answer may actually depend on what one means by ‘apparent’. There is no plant that bears strong resemblance to corn, especially in terms of its ‘ear’, a cluster of female flowers and later fruits. Its closest relative, called teosinte, differs in several ways from corn. Significantly, it differs in ways that make it an unlikely ‘proto-crop’, one that humans might manipulate by selective harvesting and planting in order to make it more desirable. However the genetic differences between teosinte and corn turn out to be quite small, differences in developmental genes that can greatly alter the ‘looks’ of a plant and, significantly, alter features that make it a desirable crop. Thus there IS an ancestor of corn, a species of teosinte that grows wild in Mexico. But it doesn’t look much like corn and has features, in particular a small number of fruits that are encased in very rigid structures, that don’t make it a likely candidate for domestication.

Whether teosinte was actually utilized agriculturally and favorable characteristics (more fruits that are easier to open) were selected for, or a more suitable version appeared ‘on its own’, without human intervention, is not known. Regardless, once a version of corn appeared, probably 9000 years ago, it was rapidly transformed by early farmers selecting for favorable traits, in particular larger ears. Less than 2000 years ago modern versions of the crop appeared in the area that is now part of Mexico and rapidly spread throughout most of the Americas. It is an unusual grass in a number of ways: there are separate male and female flowers (most plants and most grasses have bisexual flowers) and it produces seeds that do not fall off the plant as those of most grasses do. 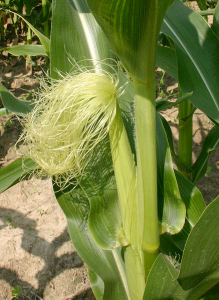 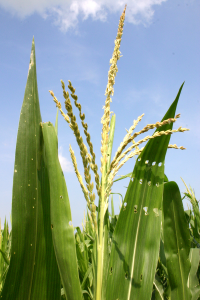 Unisexual flowers of corn: female flowers (above) are clustered on a branch called an ear. There are typically 1 to 3 ears per corn plant, occurring (as they always do!) in the axils of leaves, male flowers are also clustered on special stems, these occur at the top of the plant in structures called tassels.

Corn is a flowering plant in the monocot group, a phylogenetic entity that includes orchids, palms, lilies and grasses. The grasses are put together in the Poaceae family, a large family that includes staple crops (wheat, rice) and is also extremely important ecologically, often dominating regions.

To people who think grasses always look like those in their lawns, corn looks quite different: it is large, both in terms of height and in the width of leaves. Initially the ‘stem’ is actually just the round basal parts (the sheaths) of individual leaves, with the oldest leaves on the outside and newer leaves being produced inside. As is the pattern in grasses and many other monocots (see the discussion of banana ‘stems’ in Chapter 8), the shoot apical meristem stays at the very base of the plant, near the ground. The ‘stem’ is produced by the sheaths of multiple leaves. Eventually a true stem emerges from the interior as the shoot apical meristem is elevated, ‘telescoping’ up the space formed by the sheaths of several leaves. The stem elongation ends when the shoot apical meristem transforms into a flowering meristem, producing a clusters of male flowers (the tassel) at the top of the stem. As is typical of all plants, branches form in the axils of leaves; what is unusual is that these branches produce very little stem, only a short axis with multiple female flowers. The base of this flowering branch produces multiple leaves that grow over the flowers to form the ear of corn. Emerging from the tip of the ear are the strands of ‘silk’: the stigma and style of each individual flower enclosed in the ear. 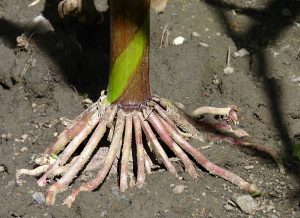 functions to support the stem.  Adventitious roots are roots that originate in an abnormal place, usually from the stem, the result of a meristem developing in the stem that produces a structure that grows at a roughly 45 degree angle rather than straight down. Prop roots do not function to absorb water and nutrients, instead they attach the stem more firmly to the soil.

Corn reproduces sexually and is difficult to propagate vegetatively. Because it has separate male and female flowers it is very easy to control breeding and corn was the first crop for which hybrid seed was produced. Hybrid seed is produced by crossing two different inbreed lines and results in F1 plants that are particularly vigorous (see Chapter 28 and Chapter 31).

Corn is a photosynthetic autotroph that uses the C4 photosynthetic pathway. Like most C4 plants, it has a particularly high rate of photosynthesis, has a high water use efficiency (carbon dioxide fixed compared to water loss) and will benefit less from rising carbon dioxide levels than C3 plants (Chapter 20).

Corn is obligately tied to human agriculture and could not survive were it not for our efforts. It has been developed for a wide number of uses including animal feed (fodder, silage), fuel (ethanol), home heating (corn/pellet stoves), and a wide variety of food products. It is now grown world wide and is second only to rice in terms of world-wide production. It is affected by many pests/diseases including smut and rust fungi, army worms (moth larvae), aphids and viruses.

The bulk of a corn kernel (which is technically the fruit of the plant) is amylose starch, a carbohydrate with a very simple structure, consisting of a string of 6-carbon glucose molecules attached end to end, i.e. at two points. Some forms of starch (amylopectin starch) are not solely linear chains but are branched by because some glucose molecules are attached to three other glucose molecules rather than two.

The starch in corn kernels is formed from sucrose that is synthesized in photosynthesizing leaves and transported to the developing fruit thru the phloem tissue. Sucrose is a disaccharide formed by combining one glucose with fructose, another 6-carbon sugar. After the sucrose is transported to the developing corn kernels the sucrose is broken down to a glucose and a fructose. The glucose is used to make starch directly; the fructose is converted into glucose and then is also used to make starch.

Corn kernels are sweeter earlier in their development, before the kernel is mature, because more sugar (sucrose, glucose and fructose) is present. As the fruit matures most of the sugars are converted into starch and mature kernels are usually not at all sweet. However, corn plants exhibit variation in the amount of starch produced, thereby producing variation in the degree of sweetness in mature kernels. Native Americans were aware of this when they introduced corn to Europeans. By the early 20th century agricultural research had developed substantially sweeter varieties of corn and isolated the cause of the sweetness, which is a lack of (or lesser amounts of) one or several enzymes that are responsible for synthesizing starch from sucrose. Mature corn kernels of sweet varieties of sweet corn are ‘shrunken’ because they lack the starch that normally makes them plump.