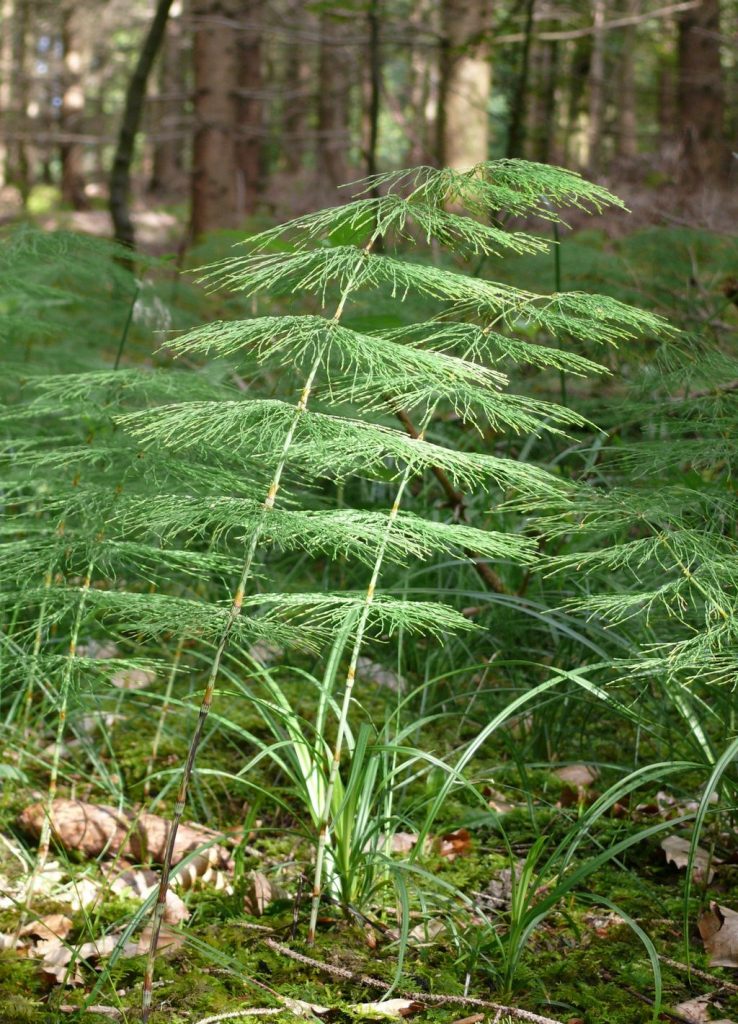 Horsetails, the genus Equisetum, are a very easily recognized group of plants that are commonly found throughout the world. They represent a very small remnant, only a single genus with less that 100 species, of a group that in the Paleozoic was a much more conspicuous component of the earth’s flora.  From 100 million years, ending 250 million years ago, this group was a dominant in terrestrial habitats world wide and the group is responsible for much of our coal and oil deposits.  They are common in most of the United States, sometimes as a roadside weed or in wet habitats.

The genus traditionally had been put in a phylum all by itself but more recent treatments lump the horsetails in the fern phylum (Pterophyta), usually putting them in an order (Equisetales) distinct from other fern groups. When treated this way, the orders of the Pterophyta diverged in the late Paleozoic era. Whether you consider horsetails to be a phylum by themselves or an order within the Pterophyta, they still are very easy to recognize because of their distinct structure.

Horsetails have a very distinctive form–they have jointed stems with small and inconspicuous leaves that appear as scales at the base of each section of stem. The stems are hollow and ribbed. The successive sections of stem get shorter and shorter, reminiscent of a logarithmic scale and there is a claim (I haven’t been able to verify this) that the plant was an inspiration to John Napier to invent logarithms. Napier invented logarithms in the 16th century to make calculations easier (many biology students don’t believe that logarithms make calculations easier!!). The stems sometimes have whorled branches (in which case they look a bit like a horse’s tail) but sometimes don’t (in which case they really do not look at all like a horse’s tail!). Horsetails have extensive underground horizontal stems (rhizomes) off of which emerge roots and vertical above ground stems. The commonly seen plant is a sporophyte that produces spores in a terminal cone or strobilis. Some species are dimorphic, with vegetative stems that are green and photosynthetic but produce no spore-producing strobili, and fertile stems that are brown (no chlorophyll, no photosynthesis) but do produce strobili and thus are only involved in reproduction. Fossil members of the group had secondary growth and grew up to 18 m in height, with stems a half a meter across. These plants were significant components in the deposits that yield coal and oil.

Like all plants, Equisetum exhibits alternation of generations.  They have a easily visible sporophyte and hard-to-find gametophyte.  Spores are produced in ‘cones’, terminal portions of stems where certain cells undergo meiosis to produce a ‘tetrad’ of four spores.  The spores have extensions of the cell wall called elaters that move in response to humidity changes and provide some motility to the spores (see video below).  The spores germinate and produce haploid gametophytes that are bisexual (thus the plants are homosporous, producing only one type of spore).  Equisetum gametophytes are  small, uncommon produce archegonia, that produce eggs, and antheridia, that release haploid, flagellated sperm that are chemically attracted to the archegonia and fertilize the eggs, forming a zygote that grows into a diploid sporophyte that soon overgrows  the gametophyte.

Equiesetum (both the sporophyte and gametophyte) is a typical photoautotroph, using the energy of sunlight to synthesize carbohydrates from carbon dioxide and water and then using the carbohydrates as an energy source in cellular respiration and as building material to synthesize a variety of biomolecules. Note that for dimorphic species the spore bearing stems are photosynthetic only briefly and are ‘fed’ by the photosynthetic branches for most of their existence.  Significantly, the energy captured by horsetails 300 million years ago is now being utilized when coal and oil are burned, releasing carbon that has been trapped in molecules that were transformed into fossil fuels.  The plant has a fairly unusual nutrient requirement, silicon, which most plants do not have (many plants may take up and contain silicon but it is not a required element, i.e. they can grow without it). Silicon is also required by the diatoms (phylum Bacillariophyta), a group of unicellular algae. The presence of silica dioxide deposits in the cell walls of horsetails makes the stems particularly tough and accounts for the common name ‘scouring rush’ because pioneers used the stem of the plant as a scrub brush.

Equisetum plants are commonly encountered both in ‘weedy’ habitats (the plant can be a problem in agricultural situations) and also in less disturbed habitats. The group generally requires high light conditions and most species are shaded out when trees are present. Like the clubmosses, they do not appear to suffer much from herbivory; this is perhaps because of the silica deposits in the cell walls.