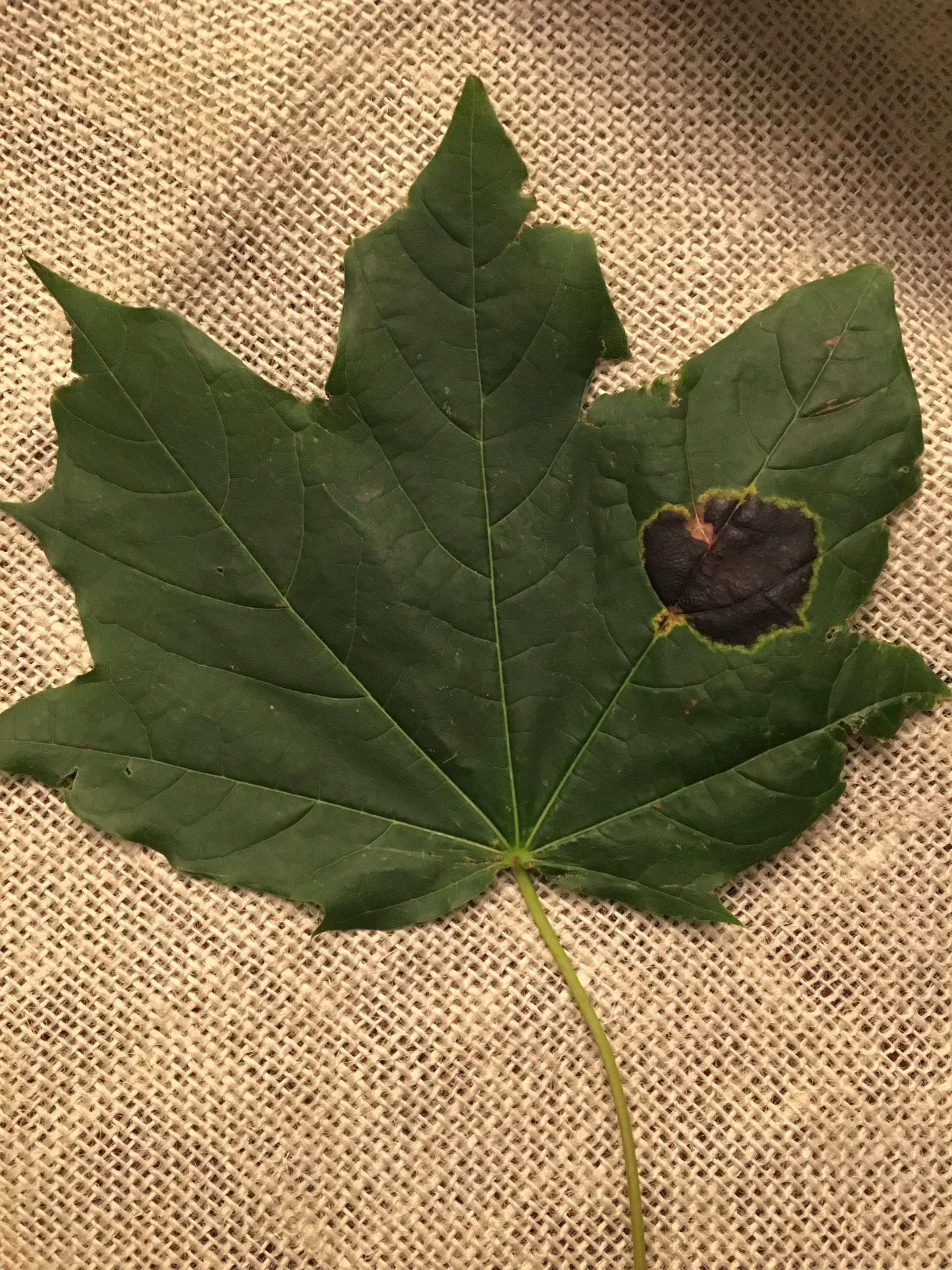 The fungus Rhytisma lives inside tree leaves and produces large black spots on the leaves late in the growing season (August and September) as the leaves start to senesce. The most common species in the northeastern U.S. occur on maples but there are other species that occur on other tree species. The black spots form when the fungus produces large black masses of hyphae (‘stroma’) that break through the epidermis of the leaf. In the spring of the year, spores produced in these black spots are released and can be dispersed by the wind. Some fortunate spores end up on newly produced leaves where they can germinate and penetrate through the epidermis to get inside the leaf. The tar spot fungus is an example of an endophyte, an organism (usually a fungus) that lives inside of plants. Generally endophytes are not very apparent and they are not generally thought of as causing disease. Some endophytes are even thought to be a positive presence, providing benefits such as disease and stress resistance while at the same time benefiting from being fed and protected by the plant

Rhytisma is an ascomycete fungus. As is common for a number of fungi, Rhytisma was described with both a sexual form (placed in the Ascomycota) and an asexual form (placed in the Fungi Imperfecti) but it is now recognized that there is one entity that sometimes reproduces sexually and sometimes does not. (Placing fungi into phyla used to require the observation of sexual stages; and fungi lacking sexual stages were placed in the ‘Fungi  Imperfecti’). With modern molecular techniques fungi can be placed into groups without observation of the sexual stages.

Tar spot fungus consist of septate hyphae (i.e. filaments with cross walls) that spread through part but not all of the leaf that they have penetrated, typically  spreading 1-3 cm. If sexual reproduction is to occur hyphae from two different mating strains need to find each other (i.e. both are present in the same leaf) and some of their hyphae fuse (plasmogamy) to form a dikaryon cell that grows to produce dikaryon hyphae where each cell has two haploid nuclei. In late summer both the haploid hyphae (i.e. those of each mating type) and the dikaryon hyphae intertwine to form a stroma, a thick mass of hyphae. Within the stroma are produced small, cup shaped ‘apothecia’. Within these structures the tips of some of the dikaryon cells produce the the characteristic asci–elongate cells where karyogamy occurs to make the cell temporarily diploid. This is the only diploid cell produced by tar spot fungus or any ascomycete. The diploid nucleus undergoes meiosis followed by mitosis to produce a cell with eight haploid nuclei, each of which develops a cell wall to form ascospores. The ascospores of tar spot fungus are quite narrow and pointy.

Tar spot fungus can reproduce both sexually and asexually. Sexual reproduction, descibed above, is in a manner typical of Ascomycetes.

Tar spot fungus is a herbivore, obtaining matter and energy from its host. Hyphae apparently can acquire nutrients from host cells without the presence of haustoria, evidently obtaining materials that ‘leak’ from cells. Because of the fungus’s modest growth habits (it doesn’t grow particular fast and does not grow extensively, i.e. it does not go through the entire leaf) there is minimal damage to its host.

Recently some endophytes, like tar-spot fungus, have been recognized to benefit their host in a variety of ways: by producing toxins that deter other herbivores, by somehow making their host more able to fight off other diseases, by making their host better able to withstand harsh environmental conditions (e.g. drought).

Another endophytic interaction that you may have heard of is ‘St. Anthony’s fire’, a human disease caused by the consumption of grain (e.g. wheat, rye) infected with another endophytic fungus. The fungus produces alkaloids related to LSD that can cause hallucinations and death if grain harvested from plants infected by the fungus are consumed.