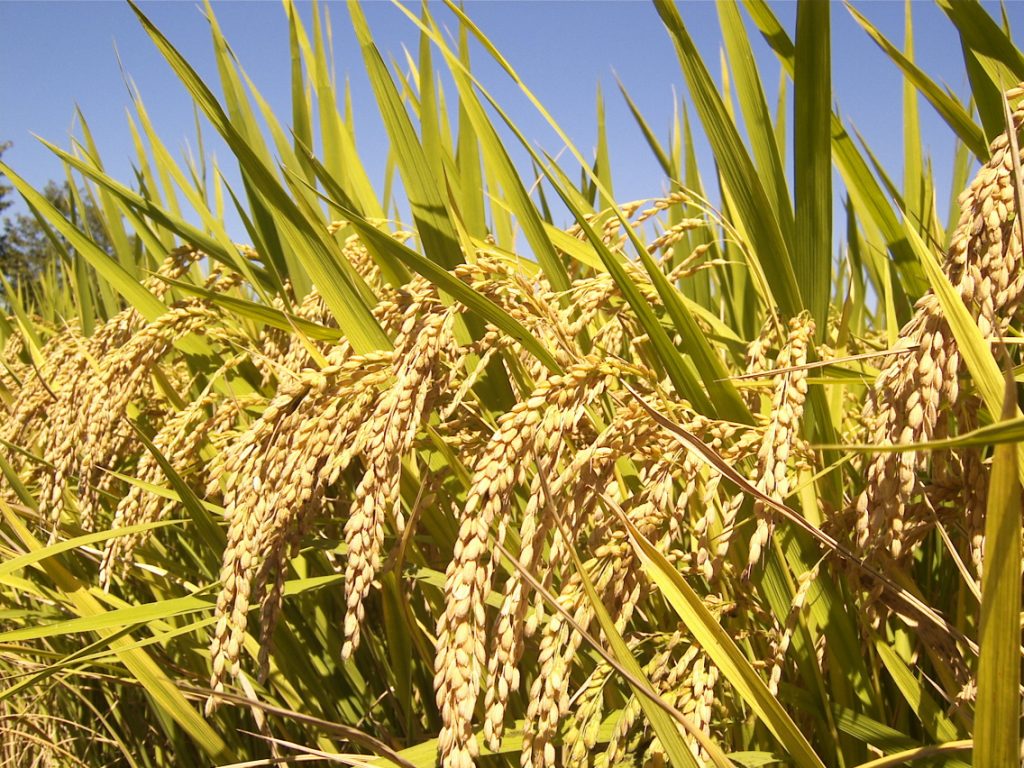 Rice is our most important cultivated plant, feeding more people than any other crop. It is a n annual or short-lived perennial grass species native to Asia. Its domestication (i.e. cultivation and modification by humans) started 8 to 13 thousand years ago. Much of the world, especially Asia, has rice as its primary food source and rice production is critical for feeding the world. Rice requires warm, moist conditions for growth and is grown world-wide in tropical and warm temperate habitats. As is the case in all ‘cereal grains’ the ‘cereal’— the portion eaten — is a one-seeded fruit with the cells of a very thin fruit fused to those of the seed coat.

Oryza sativa is by far to most utilized rice species, although a second species (Oryza glaberrima) is grown in western Africa. ‘Wild rice’ (Zizania aquatica and Z. palustris) are in the same tribe (a level of classification between genus and family) but are not generally considered a type of rice. Wild rice was and is harvested by Native Americans and has a very limited amount of production, being used primarily for the gourmet food industry. Virtually all of the world’s production of rice is Oryza sativa, and there are numerous varieties. (The Rice Association states that there are over 40,000 varieties and if you visit a grocery store you might see a dozen or so different types.) Oryza is in the monocot group and is in the grass family (Poaceae).

Rice has a typical grass structure with a series of leaves that form a false stem through which emerges the main stem when the plant flowers and fruits. Although there are some perennial varieties, most rice varieties are annuals with the plant senescing as it develops fruit. The few perennial varieties have annual shoots but are able to sprout new stems from a below-ground shoot system. Particularly significant to its growth in flooded conditions is the fact that the leaves have a thick cuticle and a vertically corrugated surface that allows the grooves to form air-filled capillaries. These allow for the movement of both oxygen and carbon dioxide.

Rice reproduces sexually, producing bisexual flowers that develop into fruits (cereal grains) after pollination and fertilization. As is the case for most grasses, pollination is by the wind and the flower has features to promote pollination: long stamens that are exerted (extended out of) the flower and elongated stigmas that also extend out of the flower. Most rice varieties are annual and show little vegetative spread. But perennial rice varieties do spread laterally below ground and can produce of new erect branches after the first is harvested. In this manner the plant may yield crops for up to 30 years. Rice is difficult to propagate vegetatively and most rice that is planted is first sprouted from seeds and then transplanted as seedlings. 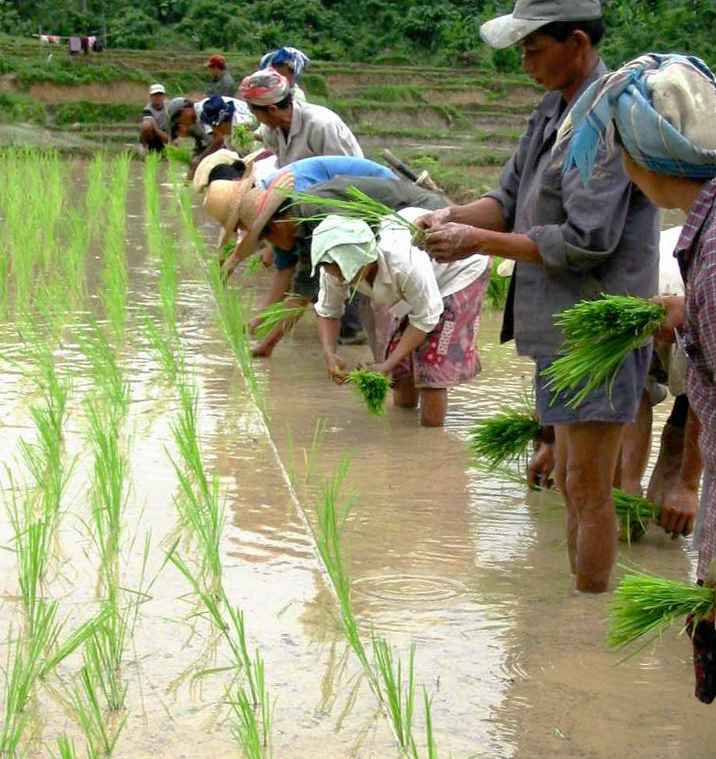 Rice is a photosynthetic autotroph that uses the C 3 photosynthetic pathway. Like all plants, rice requires 14 mineral elements in order to grow, with nitrogen often  being the limiting factor for growth and crop yield. In common with most plants, rice can acquire minerals that are not essential, including minerals that are toxic to the plant and/or toxic to organisms that eat the plant. An example is arsenic. Arsenic is not required by rice or by any plant, but is required in trace amounts by at least a few animals. Arsenic is sometimes accumulated by plants, occasionally to levels that some consider unsafe. Rice is a crop that is much more likely to accumulate arsenic than other crop species, primarily due to the fact that it is usually cultivated in aquatic situations that can promote arsenic availability. While no one is stating that all rice should be avoided, there are some concerns being raised and the arsenic content of rice is being monitored.

Like wheat and corn, the most significant of rice’s interaction is with humans: their efforts to cultivate rice are of overwhelming significance to the plant. Three other interactions related to its cultivation are worth noting: