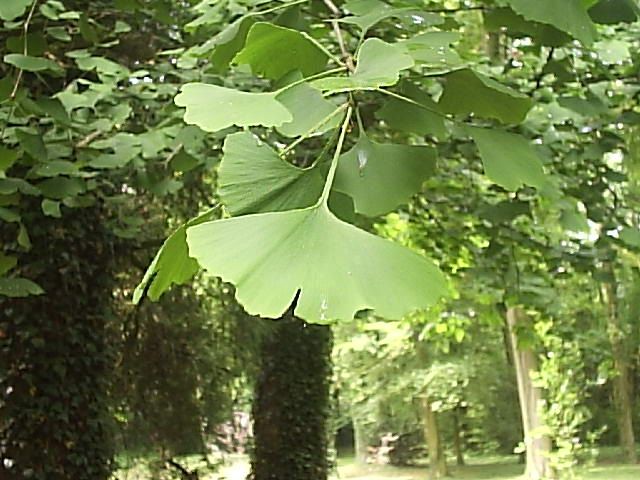 Gingko (Ginkgo biloba) is a commonly planted tree that many have  probably  seen but may not have distinguished from other trees. In spite of the fact that its form is very similar to most trees it has a number of distinct features. In particular, most trees are flowering plants (angiosperms) or conifers, ginkgo is neither! 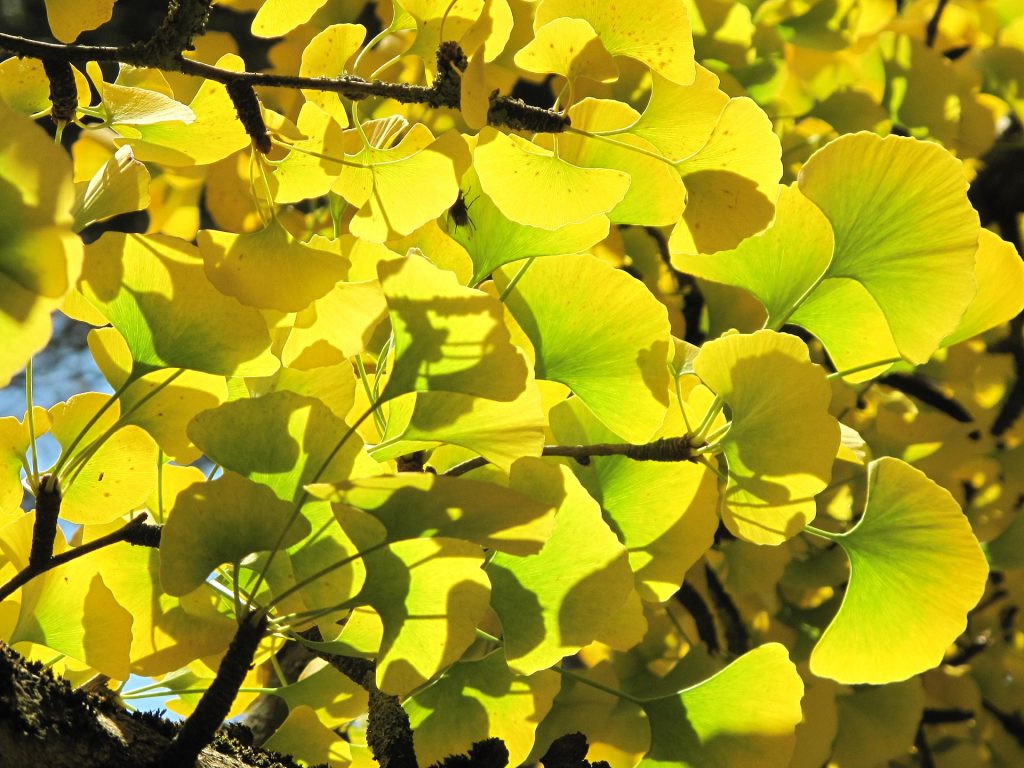 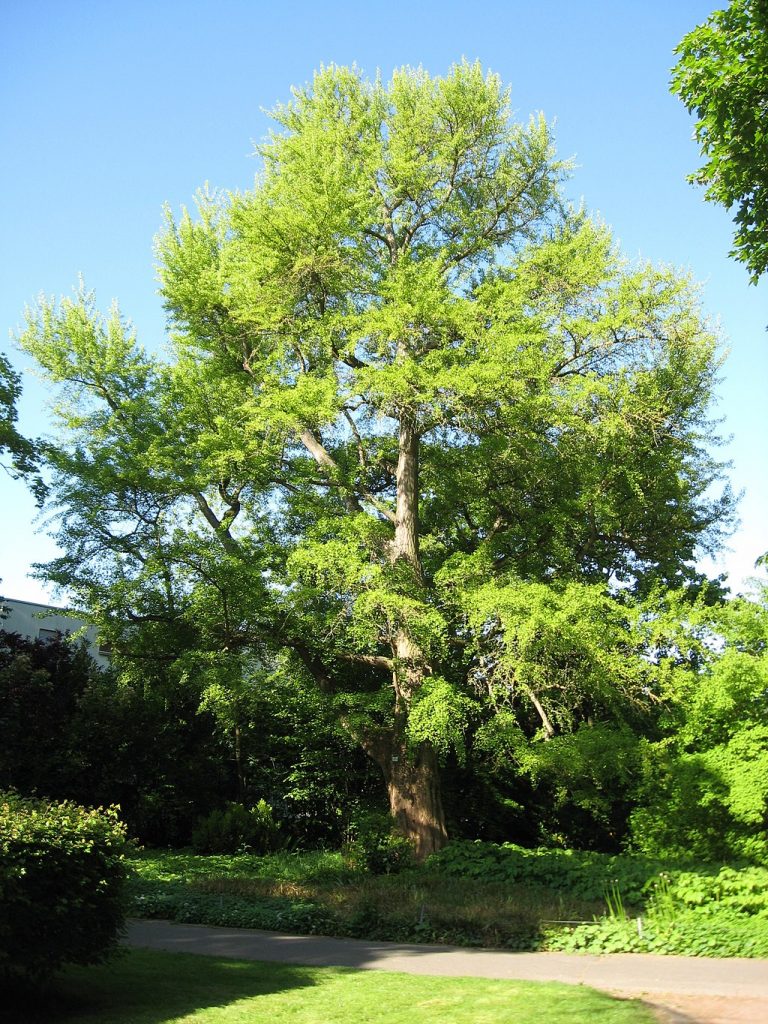 Ginkgo looks like a typical tree and, from a distance, because of its broad leaves, would be considered to be more closely related to angiosperm trees like oak  and maple than to conifers like pine and hemlock. However, the wood of ginkgo, like that of pines, hemlock and all conifers, contains no vessels or fibers, only tracheids and parenchyma cells. Gingko, like some conifers (e.g., larch) , has ‘short shoots’ (very slow growing shoots) and ‘long shoots’ (faster growing shoots). The short shoots look like spurs on the stems and make identifying ginkgo easy in the winter.

Ginkgo produces seeds that develop in the female ‘cones’, which resemble olive fruits. The species is dioecious, i.e. it has separate male and female plants. Male plants produce pollen in cones. The pollen is dispersed to female cones by the wind. Like Ephedra in the Gnetophyta group, the female cones of ginkgo produce a drop of liquid that helps to capture pollen. This drop, containing pollen, is pulled into the cone by capillary action as the drop dries. Once in the cone, the opening to the outside is closed and the pollen germinates and produces a small, fungal-like structure, the male gametophyte, which acquires nutrition from tissues of the ovule. The male gametophyte matures and releases mobile, flagellated sperm into  the liquid that is present in the ‘canal’ at the end of the ovule. These swim to the female gametophyte and fertilize the egg to form a zygote. Flagellated sperm are present in all ferns, mosses, and liverworts but are extremely rare in seed plants, being found only in Gingko, the cycads and some gnetophytes.

Ginkgo is a typical photosynthetic autotroph, capturing the energy of sunlight in carbohydrates and then using these carbohydrates both as a source of materials and a source of energy.  It is a C3 plant that acquires carbon dioxide as it diffuses through stomates from the air into the leaves  Interestingly, in the Mesozoic, when carbon dioxide levels were much higher than now, its stomatal density was much lower and some have speculated that rising carbon dioxide levels might allow Ginkgo to expand its range from surviving only where it is planted.

Ginkgo are extensively planted as a shade tree. It has an appealing form and grows well in a variety of habitats, including urban ones where pollution and asphalt produce an environment where many trees fare poorly. A significant, but not well explained, feature of the plant, is that it grows well when planted but does not establish itself on its own. Many workers feel that there are no ‘naturally-occurring’ ginkgos, i.e. that it is only found where it has been planted and its current existence is due solely to the fact that humans have been planting them for the last 10,000 years, most of that time in China, but more recently world-wide.

The ‘fruits’ (female cones) of ginkgo produce a foul smell (butyric acid) when ripening. In the past the female trees were sometimes removed when they were old enough to produce fruit but modern horticulture has allowed plants to be cloned and most of the trees now planted are male.

The leaves of ginkgo are thought by some to be an herbal medicine that improves brain function. Conclusive evidence of this is lacking.