The diatoms are a phylum of unicellular photosynthetic algae and are a group significant for their unique structure and ecology.

The diatoms represent a distinct group but the placement of the diatom group is problematic both in terms of level (phylum or class) and in terms of phylogeny (i.e. who are they grouped with).  They may be placed in the ‘miscellaneous’ kingdom, the Protist Kingdom, which is practical but not phylogenetically accurate.  They have affinities to several other groups, in particular the brown algae.  In a number of taxonomic schemes they are placed in a group called ‘heterokonts’, sometimes in a ‘Chromista’ kingdom and sometimes in a Ochrophyta phylum.  The groups that are sometimes associated with them include the  ‘golden-brown’ algae, the brown algae, and some non-photosynthetic forms, in particular the water molds (Oomycota).  It is now thought that the group originated from an endosymbiotic association of a red algae (a eukaryote) with another eukaryote and that the chloroplasts of diatoms and related groups represent derivatives of the red algae.  Since the red algae themselves (like all eukaryotes) are thought to have originated from an endosymbiotic event (this is considered to be the primary endiosymbiotic event), the endosymbiosis that that produced diatoms is considered to be a ‘secondary  endosymbiosis’.  Evidence for this can be found in the membrane system of the chloroplasts.  The chloroplasts of red algae, green algae and plants have two membranes, one thought to be derived from a prokaryotic symbiont, a cyanobacterium (= blue-green algae), and one derived from the host that engulfed it (the phagosomal membrane (the membrane that 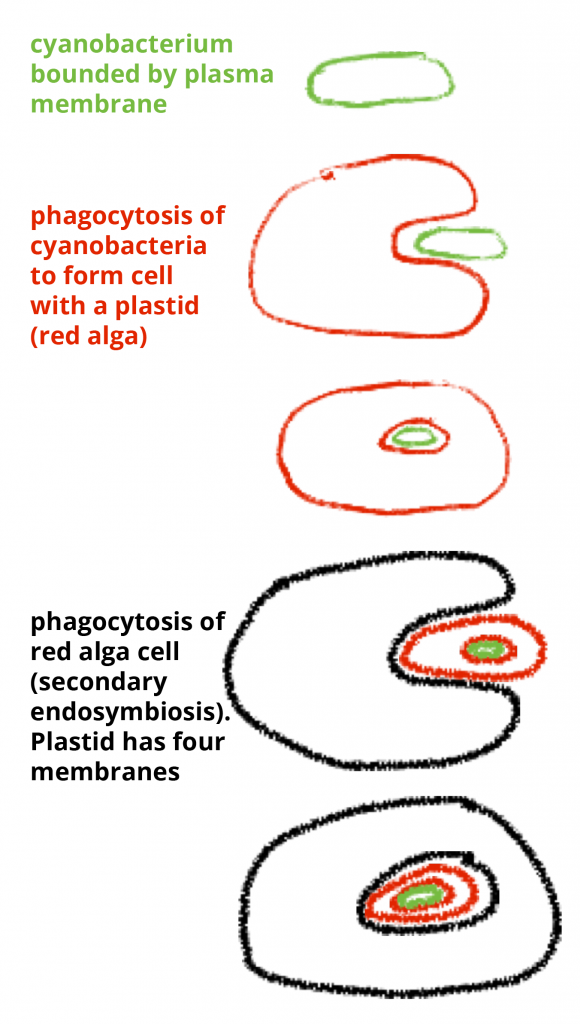 surrounds the particle being engulfed).  The chloroplasts of diatoms (and groups thought to be related to them) have four membranes.  The two ‘extra’ membranes represent the outer membrane of the engulfed red algae plus the phagosomal membrane of the second endosymbiotic event. Diatoms, and the heterokont/chromista/ochrophyte group as a whole, are thought to be of relatively recent origin, obviously after the origin of red algae and also well after the origin of plants.  The coloration of the diatoms, and of the photosynthetic members of the heterokont/chromista/ochrophyte group as a whole, is brown or yellow-brown (ocher is a yellow/brown color) and comes from the presence of a different pigment, chlorophyll c, in addition to chlorophyll a. 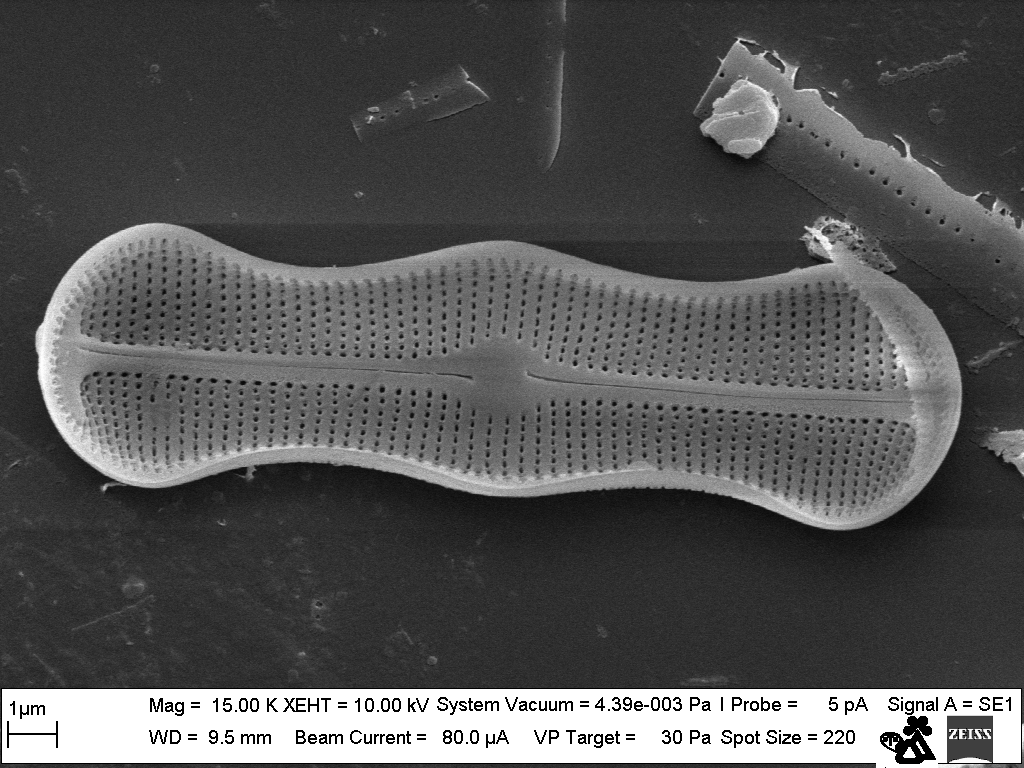 Diatoms are unicellular, and like most (but not all!) unicellular organisms, they are small, generally 20-100 um in size, and only visible to the naked eye as dust. They have a cell wall with a unique (in biological terms) composition, being composed of silica dioxide.  Although silica dioxide is a rare component of organisms it is a very common mineral.  Quartz is silica dioxide, thus glass, sand and diatom cell walls all have the same composition). The cell walls of most organisms are usually polysaccharide in nature (i.e., carbon based). Thus most cell walls would be considered ‘organic’ if one defines organic on the basis of carbon (as most chemists do); but if one considers ‘organic’ to mean relating to living things then silica dioxide sometimes is organic, but only rarely, as only a few other groups of organisms utilize the material in their structure (see horsetails). Another distinctive feature of the cell wall of diatoms is that it is composed of two distinct parts (‘frustules’), a ‘top’ half that is slightly larger and whose sides overlap the ‘bottom’ half, much as the top of a shoe box fits over the bottom. The frustule is ‘sculptured’ with minute pores that give it a very decorative look. Diatoms come in two basic forms: radially symmetrical forms (image at top of first page) and bilaterally symmetrical forms, like the image at the start of this section. When the diatom dies the two halves separate and the top and bottom, being composed of a very stable material resistant to decomposition, settle to the bottom of the body of water that the diatom was living in and become part of the sediment. Most diatoms exist as separate individual cells but a few are colonial, resulting from the failure of newly produced cells to separate from their parent cell.

Diatoms generally reproduce asexually by mitosis. The two frustules separate, each with a nucleus and cytoplasm. Each daughter constructs a new frustule.  The newly constructed frustule is always the bottom (smaller one). This means that one daughter cell (the one coming from the ‘top’) is the same size as the original, and the other new cell is slightly smaller. Thus, through time, the average size of a population of diatoms gets smaller. For most diatoms, when they shrink to 1/3rd of the maximal size, sexual reproduction is triggered and, in the process, the maximum size is once again produced.

Sexual reproduction requires the normally diploid nucleus to undergo meiosis. The details of the sexual process vary considerably and show variations found in other sexual organisms.  For most pennate diatoms , sexual reproduction does not involve distinct gametes (i.e. egg and sperm) and while meiosis produces four haploid nuclei, not all of these persist.  Two cells fuse to one another, both undergo meiosis and the movement of haploid nuclei and their subsequent fusion allows one or two auxospores to be produced per pair of cells.  In centric diatoms two different types of gametes are produced.  Some cells undergoes meiosis and produce one or two immobile eggs (again, two or three of the four haploid nuclei produced by meiosis degenerate).  Other cells undergo meiosis.  In some species each of the four haploid cells develop into sperm In other species the products of meiosis are not sperm but are sperm mother cells that will subsequently divide to produce up to 128 flagellated cells (sperm). Sperm swim to fertilize eggs which may or may not be released from their parent cell. Upon syngamy a structure called an auxospore is produced that expands to produce the maximum sized cell.

Diatoms are photosynthetic and are typical autotrophs, using the sun’s energy to reduce carbon and accumulate carbohydrates, and using the energy obtained from the oxidation of carbohydrates (i.e. respiration) to carry out a variety of life functions including the acquisition and accumulation of other elements necessary for life. Although, like all life, they require N, P, S, K, Ca, Mg, Fe, Mn, Cu, Zn, Mo, Ni, B, Cl, they also require at least two other elements, silica and selenium, that many organisms (in particular, most plants) do not require.

Here are a select few of the many interactions involving diatoms: