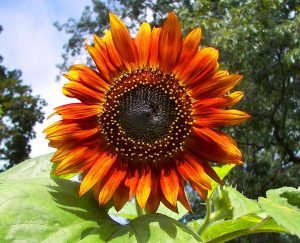 The sunflower is a familiar plant that has the distinction of being the only widely used crop species that originated in North America. Although Native Americans domesticated the plant and selected for plants with single heads and larger seeds, its initial use after being introduced into Europe was primarily as an ornamental plant in gardens. It became popular as a crop plant first in Russia, largely as a consequence of edicts from the Eastern Orthodox Church concerning diet restrictions during Lent. During Lent, consumption of oils from a variety of plants (e.g. olive, palm, sesame) was forbidden, but sunflower, a recent arrival, was not banned and sunflower became an important crop in Russia by being a source of oil during Lent. It is now the national flower of both Russia and the Ukraine. Early in the 20th century sunflower came back to North America as a crop grown primarily for its oil in both the northern U.S. and in Canada. In the southern hemisphere, Argentina is a major producer of sunflower. The oil from sunflower is used both in cooking and also industrially (e.g. as a base for paints). It can be used as a substitute for diesel oil directly or after first being converted to biodiesel. After oil has been extracted the remaining seed can be used for animal feed. To a limited extent sunflower seeds are eaten directly, especially by baseball players!

Helianthus is a genus in the sunflower family (Asteraceae), one of the largest families angiosperms. There are roughly 70 species, both annual and perennial, with H. annuus (an annual) being the most important crop species. A perennial species (H. tuberosus), called Jerusalem artichoke, is occasionally grown for its edible tubers.

Sunflower is an herbaceous annual. Although wild representatives are usually branched, the cultivated form typically does not branch and consists of a single stem that may be well over two meters in height with the single large head whose actions inhibit the production of branches below.. The stem produces a vascular cambium but does not form wood (a continuous cylinder of secondary xylem) instead it adds to the existing vascular bundles. Although it does not produce wood, the stem is remarkably ‘woody’, meaning tough, durable and resistant to deformation. Most cells in the primary xylem and phloem are extensively lignified and produce a strong stem, able to stand several meters tall and hold a head, that may weigh as much as two kilograms, or multiple much smaller heads. The stem is often more than 5 cm in diameter, with most of the width from primary growth. The bulk of the stem is pith and the strength comes from a ring of vascular bundles near the margin of the stem. 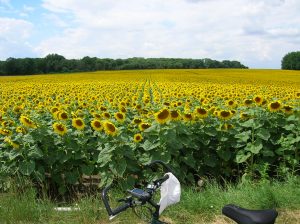 Fields of mature sunflowers are striking because all the heads, regardless of the time of day, are facing the same direction, east. In contrast, younger flower heads, before they start to flower, show a daily movement, tracking the sun from east to west during the day and then returning to the east overnight. The control of the movement probably involves both an endog enous biological clock and a responsiveness to incident light.

The heads of sunflowers are a good place to observe the spirals associated with plant architecture. Spirals rotating in both clockwise and counter-clockwise directions are evident. The number of spirals usually relates to two numbers in the Fibonacci sequence (momath.org/home/fibonacci-numbers-of-sunflower-seed-spirals/). See also the following link connecting the Fibonacci series to the ‘golden angle’, an interesting mathematical and artistic concept (www.mathsisfun.com/numbers/nature-golden-ratio-fibonacci.html).

Sunflowers reproduce utilizing seeds produced in the normal pattern for angiosperms. The flowers are characteristic of the Asteraceae family. The ‘flower’ is actually an inflorescence, a structure of several hundred flowers of two types: the ‘petals’ of a sunflower are ray flowers, with a large petal that is actually composed of five fused parts and is is asymmetrically oriented, extending out to one side of the flower. Ray flowers are often sterile, lacking both male and female parts. The central disk flowers that make up the bulk of the inflorescence have much smaller petals that are arranged in a ring. They are bisexual and have a distinct phenology (timing). For the head as a whole the central ‘disk’ flowers mature from the outside inward, i.e. the first flowers to open are on the outside. Each individual flower also has a pattern of development. The anthers mature first, making pollen available to pollinators, primarily bees. After the pollen has been available for several days a stigma pushes up through the ring of anthers. Self-pollination of a particular flower by itself is unlikely unless the flower has not been visited by pollinators, in which case there may still remain pollen that contacts the stigma as it moves upward. While the annual H. annuus  must set seed to reproduce, the perennial H. tuberosa can reproduce via its tubers, which, like potatoes, are produced on underground stems (rhizomes) that allow the plant to spread laterally.  This is part of the reason that H. tuberosa can be a problem weed.

Sunflower is a photosynthetic autotroph which uses the C 3 photosynthetic pathway.  Among other pathways, the sugars produced in photosynthesis are transported as sucrose from the leaves to developing seeds and then used to construct the oils present in the sunflower seeds.  The conversion of sugars to fats requires energy (reducing power and ATP) and this is supplied by the oxidation of sugars.

Sunflower probably represents a classic case in the evolution of crops. It is a ‘weedy’ species in an ecological sense, one that thrives in disturbed habitats. Because of this, it probably frequented the areas close to primitive human habitation. Subsequently humans recognized its utility and started actively cultivating it and thereby developing it as a crop. A similar scenario may also apply to wheat and other crop species. 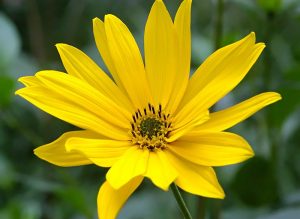 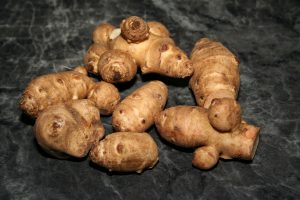