Gonyaulax is representative of a n important group of unicellular organisms, the Pyrrophyta (sometimes called Dinophyta). The common name for the group is the dinoflagellates. Like the Euglenophyta, the group contains both photosynthetic and non-photosynthetic forms. Gonyaulax and several other dinoflagellates are notable for their association with two familiar phenomena: ocean bioluminescence and red tides, although most dinoflagellates are not.  And both bioluminescence and ‘red tides’ (algal blooms) are not restricted to dinoflagellates.. The group as a whole is extraordinarily diverse in terms of their biology, interactions with other species and evolutionary history. 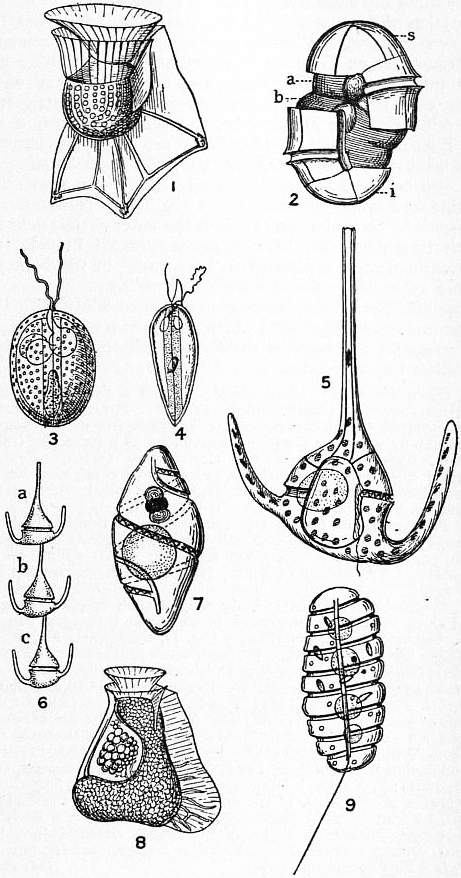 Because of certain ‘prokaryotic’ features associated with their nucleus and DNA, the dinoflagellate group was once were once thought to be a ‘transitional’ group between prokaryotes and eukaryotes but workers now believe that these features are  ‘ derived’ (i.e. appeared after the group originated) and not ‘ancestral’ (present in the original dinoflagellates). That is, it is thought that the dinoflagellates diverged from other eukaryotes and then developed these ‘prokaryotic’ features. Modern treatments often lump the dinoflagellates with two other unicellular groups that are completely heterotrophic: the ciliates (including Paramecium) and the ampicomplexans (mostly parasites, including Plasmodium, the causal organism for malaria). There is evidence that the ancestor of all these groups was in fact photosynthetic, the result of a secondary endosymbiotic event between a red algae and a heterotrophic eukaryote, but that photosynthetic ability was lost in all of these groups, only to be regained in some dinoflagellates by a another endosymbiotic event that apparently has occurred multiple times, with (photosynthetic) diatoms, cryptomonads and green algae.

Dinoflagellates are unicellular and range tremendously in size, from 5 um to 1mm. They also vary tremendously in form although many are spherical with ‘horns’. Many have a complex boundary, called a ‘theca’ between it and the outside that consists of several large, cellulose plates enclosed in vesicles, just inside the outermost membrane. Most possess two flagellae, one long and one short and have a characteristic ‘whirling’ motion as a result of flagellar movement.

Most reproduction is asexual and the sexual process has not been found in most of the members of this group. When there is sex the diploid cell quickly undergoes meiosis; therefore finding the diploid cells is rare.

Dinoflagellates occur both as photoautotrophs and as heterotrophs. The heterotrophs may be predatory (i.e. kill and consume other living things), parasitic (i.e. live in, and sometimes, but not always, kill its host) or saprophytes (feeding on dead organic matter). Dinoflagellates also serve as the photosynthetic component for a number of symbiotic associations, in particular in corals, and thereby allow these associations to be photoautotrophic.

Dinoflagellates are found primarily in marine systems but some are in fresh-water. A number of species produces a toxin which can kill fish and invertebrates and may kill humans if they eat organisms, in particular shellfish, that have consumed the dinoflagellates. Dinoflagellates sometimes have population spikes causing what are known as ‘red tides’, so named because of the of a red carotenoid pigment often present in the cells.

Dinoflagellates are also significant in producing  the chemical dimethylsulfoniopropionate (DMSP), a chemical that is eaten by bacteria and is significant not only to their nutrition, providing carbon and reduced sulfur.  As a consequence of bacteria eating DMSP, another chemical, dimethyl sulfide, is released and this chemical is thought to be highly significant to global climate because it triggers cloud formation.

Gonyaulax has been used to study the biological clock — it is bioluminescent with a 24 hour periodicity. Additionally, bioluminescence in several species is triggered by agitation as is shown in the picture below where the motion of breaking waves triggers luminescence.