Ephedra (the common name is also ephedra, and it is also called jointfir) is a representative of a small, diverse group of seed plants that unfortunately has no common name. They are simply called ‘the gnetophytes’ after the name for the phylum, Gnetophyta. There are three genera in the group, Ephedra and Gnetum, both with less than 100 species, and Welwitchia, which only has a single species. Welwitchia has a very limited distribution (the Nambib desert of South Africa) while Gnetum is found world-wide in tropical areas and Ephedra is found world-wide in shrublands (generally hot and dry habitats). 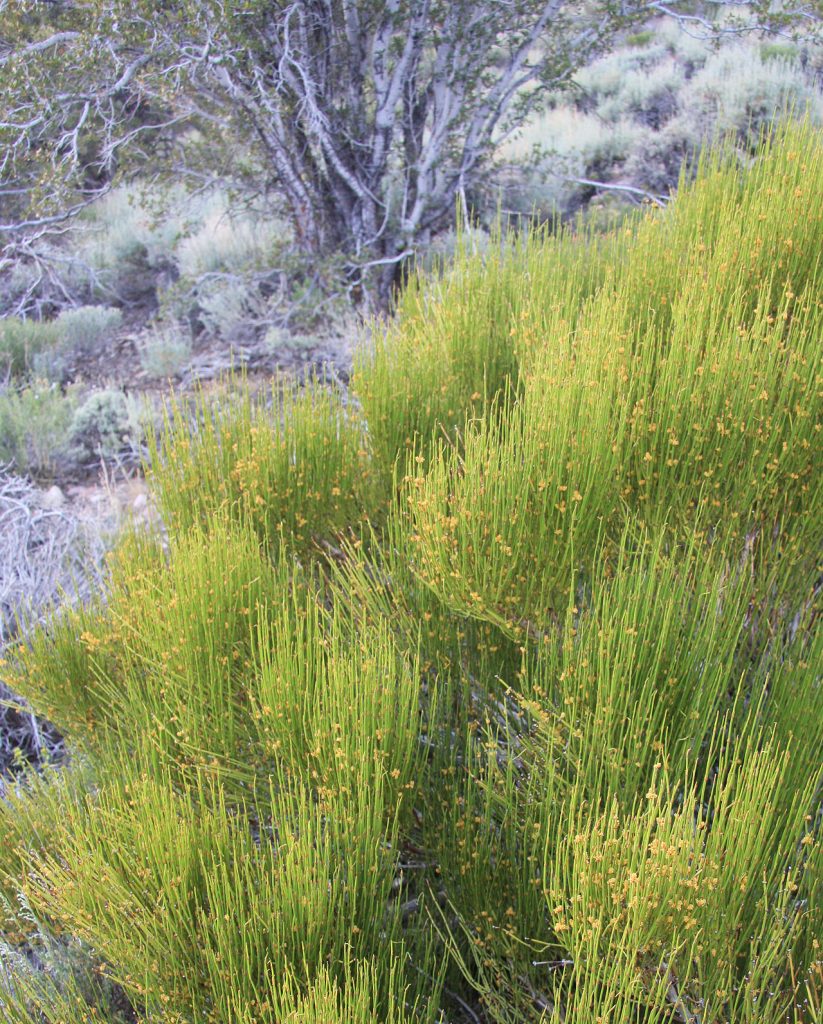 The gnetophytes are generally put in their own phylum, one of four phyla of seed plants without flowers (the others being conifers, cycads and ginkgo). Collectively, these four groups are grouped as ‘gymnosperms’ a group that some workers consider a phylogenetic entity while others do not, primarily because of difficulties relating their relationships with extinct seed plants and with flowering plants. While gnetophytes have some features (see below) in common with angiosperms (and distinct from other gymnosperms), most feel that there is not enough evidence to group gnetophytes and angiosperms together in a phylogenetic entity. The Angiosperm Phylogeny Group has the pine group as the gnetophytes closest relative.

Ephedra is a leafless shrub with multiple stems and branches that are typically 2 to 5 mm thick and green. The leaves are small, scale-like and often quickly fall off the plant. Plants produce male cones that produce microspores which develop into pollen, and female cones that produce megaspores which are retained inside the cones and develop into female gametophytes inside structures called ovules. Unlike other gymnosperms, Ephedra plants possess vessels in their xylem tissue, a feature that is found in many, but not all, angiosperms.

Like all seed plants, Ephedra produces female gametophytes inside ovules. The zygote is formed when the egg, produced by the female gametophyte, is fertilized by a sperm nucleus produced by the male gametophyte (pollen). This zygote develops into a new sporophyte embryo that is packaged inside a seed, a mature (fully developed) ovule. Double fertilization, where there are two sperm nuclei, one fusing with the egg and a second fusing with a second nucleus of the female gametophyte, is a feature once thought to be found only in flowering plants.  But it also occurs in at least some members of the genus Ephedra, although the details, in particular the lack of development of an endosperm, distinguish what happens in Ephedra from what happens in angiosperms. The female cones of some species become ‘fruits’ when the integuments thicken and become colorful. Technically fruits (if defined as ‘ripened’ ovaries, a part of the flower) are only present in flowering plants (angiosperms), but if defined as ‘structures to promote the dispersal of seeds, fruits evolved independently in: angiosperms, some conifers (e.g. juniper, yew), some gnetophytes (Ephedra) and ginkgo.

Ephedra can be a dominant species over a fairly large area, e.g. parts of southern Utah and Nevada. It is eaten by both vertebrate and invertebrate herbivores. At least some species of Ephedra are pollinated by insects, another connection with angiosperms. However insect pollination may be an ancestral feature and therefore is probably not a good feature to associate angiosperms with gnetophytes. Female cones of Ephedra produce a ‘pollination drop’ at their tip that serves both to capture wind blown pollen and to attract insects that may happen to be dispersing pollen. Some interpret these observations to point to an evolution of nectar from a fluid that encouraged the capture of wind-blown pollen. But other workers cite evidence that insect pollination is the ancestral condition in the group and that the pollination drops that capture wind-blown pollen are derived rather than ancestral.

Ephedra is a source of both ephedrine and pseudoephedrine (a steroisomer of ephedrine), alkaloids that have been used in diet pills, as a coffee-substitute, and as a cold medicine. It has the effect of decreasing nasal and bronchial congestion. These alkaloids can also be converted into methamphetamines, which is why a number of common cold medications are no longer sold over the counter.