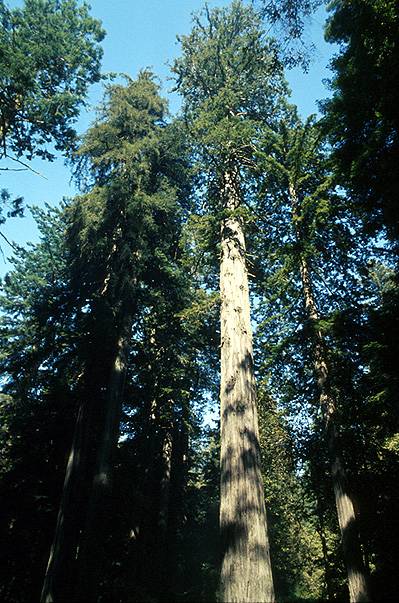 The name ‘redwood’ is applied to two distinct entities, both found in California: the ‘Coast Redwood’ of the northern California and the ‘Giant Redwood’, or ‘Big Tree’ or ‘Giant Sequoia’ of the western slope of the Sierra Nevada mountains in southern California. The habitats of these two areas are significantly different: the Coast Redwood only occurs in areas that are frequently in a coastal fog. The fog significantly alleviates dry conditions and the trees actually obtain moisture from it. The Giant Sequoia occurs in a much drier montane habitat and is a fire-adapted species, having a number of features that allows it to do well in areas that burn. Although both species can become very big, their shapes are distinctly different, with the coast redwoods being taller and thinner. The tallest tree is a coast Redwood with a height of 115.55 m and a volume of 530 m3.. This is about one-third the volume of the largest (by volume) tree, a Giant Sequoia, which has a volume of 1487 m3 but is ‘only’ 84 m tall. 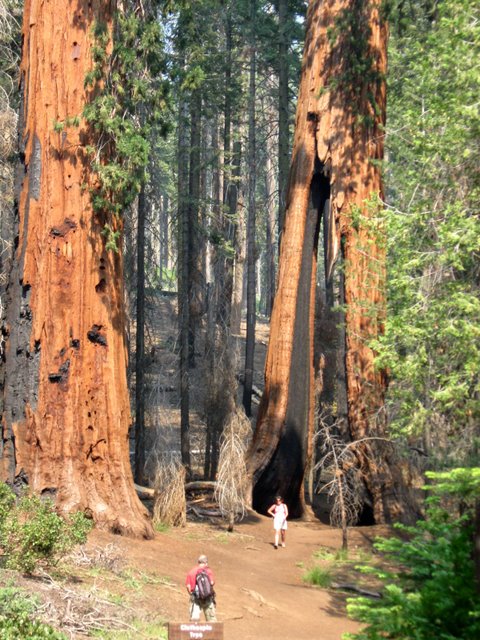 Both the coastal redwood and the giant sequoia are sole representatives of their genera (Sequoia and Sequoiadendron, respectively) with additional species being described from the fossil record. Most workers put these two genera in the Sequoioidae subfamily of Cupressaceae (cedar) family of the conifer group. A third genus in this subfamily is Metasequoia, the dawn redwood, a tree that was first described from fossils before living representatives were found. All three genera are endangered and have limited distributions, although throughout most of the Cenezoic era (the last 65 million years) these species were common and much more widely distributed. Other members of the cedar family include junipers and cedars, both of which have small, scale-like leaves that overlap each other on the stem, a feature that is also found in the Giant Sequoia. In contrast, the coast redwood has needles.

Except for their potential size these are typical woody trees and obviously have extensive secondary growth. The wood that is produced is high in tannins and this accounts for both its durability (i.e. resistance to decay) and color, features that are found in all the members of the cedar family. The cells that conduct water (trachieds) have features that allow them to operate at the extreme tensions that are required to pull water up to the tops of these tall trees. The long distance that water has to be moved, coupled with the fact it is moving against the force of gravity means that the tensions are extreme and the tracheids found in the uppermost leaves have features, including an ability to collapse, that make it possible for the transport system to function.

These are seed-bearing trees that produce seeds in cones, not in flowers. The seeds develop in mature female cones, structures where female gametophytes develop eventually producing eggs that, when fertilized, develop into the embryos present in seeds.  These trees also produce male cones where male gametophytes (pollen) are produced and subsequently released.   The cones of Giant Sequoia are fire adapted, opening in response to heating created by a fire. Coast Redwood has an ability rarely found in conifers, the ability to sprout from the trunk of the tree if the top is damaged and or killed. Sprouting is the result of the creation and activation of new apical meristems in response to some signal (perhaps reduction in carbohydrate supply) that indicates that the top of the plant is not functioning. As a consequence of this ability one can sometimes find straight rows of Coast Redwood trees reflecting their origin from the trunk of a downed stem, or a ring of trees that have sprouted from the base of a felled tree. Sprouting is fairly common in angiosperm trees but much less common in conifers.

Both species have distributions that reflect interactions with physical conditions: Coast Redwood requires the foggy conditions only found along the coast; Giant Sequoia is a classic fire-adapted species, requiring fire both to open cones and release seeds and also to remove litter from the surface because successful germination requires the seeds to have contact with the mineral soil.

Only recently have ecologists accessed the canopies of these trees and found, especially in those of the Coast Redwood, remarkable communities of lichens, mosses, vascular plants, and associated animals. Some of the needles that are shed from the top of the trees accumulate on the intertwining branches below. Soils actually develop on these sites located 50-100 m in the air and allow for a rich diversity of epiphytes and associated animals. Nearly 200 ‘species’ of lichens and nearly 50 species of bryophytes and a similar number of vascular plants have been found growing in this arboreal environment (http://www.ecology.info/redwood.htm).