Most workers consider plants to be a monophyletic group derived from green algae. All plants are considered ‘truly multicellular’ although there are some members with very little cellular specialization and only very rudimentary tissue and organ structure (Fig. 1). The majority of plants, and the ones that most people observe, are ‘vascular plants’, a monophyletic group whose name refers to particular cell types and tissues that they possess. The remaining plants, non-vascular plants (mosses, liverworts and hornworts), are often put together in a group. However, grouping organisms on the basis of what they lack is generally not useful in a phylogenetic sense and it certainly is not in this case: non-vascular plants do not form a ‘natural grouping’. Moreover, none of the three groups appears to be more closely affiliated with vascular plants than the others. Thus, the plant group is best separated into four units (generally put at the phylum level): mosses, liverworts, hornworts and vascular plants. Mosses, liverworts and hornworts are all small, often less than a centimeter in height, but they can extend over a considerable area. They do vary in form and exhibit three basic body plans that do not follow the phylogenetic groupings. These are delineated below.

Non-vascular plants, and all plants, alternate between two stages: a haploid, gamete producing form (gametophyte) and a diploid, spore producing form (sporophyte) (Chapter 11). In all of the non-vascular plants the gametophytes are much more likely to be encountered because of their greater size and longevity. When present, sporophytes often appear to be an appendage of the gametophyte which, in a structural sense, they are. For vascular plants it is the sporophyte plant that is dominant (much larger on longer lived) and the gametophyte stage will only be considered briefly here but will be described more fully when considering sex and reproduction (Chapters 13 and 14).

A thallus refers to a body form that lacks organs and tissues and is relatively amorphous, often occurring as a flattened sheet. In all of the hornworts (Fig. 1) and some of the liverworts the form of the gametophyte is a simple sheet of cells, a few cells thick, often thin enough so that the thallus is translucent. There is no cellular specialization within the thallus, although the lower surface produces unicellular rhizoids that attach the thallus to the substrate. These cells lack chlorophyll and therefore must acquire nutrition from the photosynthetic cells above.

This form is present solely in the liverwort group. Like the previous form there are no obvious organs except those associated with sexual or asexual reproduction (see Marchantia. The thallus consists of flattened sheets that spread over the substrate (soil, rocks or tree trunks and branches, leaves) and commonly bifurcates, splitting in two. The thallus is often over 20 cells thick and has discernible layers. There is an upper ‘skin’ (epidermis) that is coated with a cuticle and often is regularly perforated by pores. The pores are formed by barrel shaped clusters of cells that span the epidermis and, at least in some forms, are capable of closing the pore under dry conditions. Below the epidermis is a porous layer of cells, i.e., cells are not tightly packed and have air spaces in between them. Cells of this layer have abundant chloroplasts. Generally, the largest air spaces are below the por es. The porous nature of the upper thallus is a feature that is also be present in most vascular plant leaves and is significant in allowing carbon dioxide to diffuse to photosynthesizing cells. Lower layers of the thallus are less porous and have cells that lack chlorophyll. The lower epidermis often produces rhizoids, i.e., some of the cells have thread-like extensions that anchor the organism to the substrate. Structures associated with asexual reproduction (gemmae cups), and structures associated with sexual reproduction (antheridiophores and archegoniophores) are sometimes observed extending from the upper surface (see Marchantia), their structure and function will be discussed later in the chapter.

This is the form found in most mosses and many liverworts. The organism has a cylindrical ‘stem’ to which are attached small planar appendages, ‘leaves’, that are typically two mm or less in length and increase the light absorbing area.

The ‘leaves’ generally do not have a cuticle and are only one-cell thick, although moss leaves commonly are thickened with more cells along their center-line, forming a nerve (costa). The stem is often less than 2 mm in diameter and generally shows little cellular specialization. Rarely, in a few moss species there are cells (hydroids) that are specialized for water transport by being elongate and hollow (i.e., the cell has died and the cytosol is absent), with openings in their slanted end-walls that allow water movement between cells. Similarly, a few mosses possess cells (leptoids) that have features that facilitate carbohydrate transport. Although hydroids and leptoids function in ways similar to cell types in vascular plants, they lack lignin and are not considered vascular tissue. They represent convergent evolution, not a close relationship between vascular plants and the few mosses that possess them.

Similar to vascular plants (see Chapter 10), the orientation of the stems greatly influences the ‘look’ of the plant.  Most ‘stem and leaf’ liverworts and many mosses are prostrate, running basically parallel with the substrate that they are growing on.  But many mosses have vertically oriented stems that give them a very different appearance.  Also analogous to the form of vascular plants, mosses and liverworts vary in branching frequency, with some species showing little or no branching (occurring as single erect stems) and others showing extensive branching.

The diploid, spore producing form (sporophyte) of all the non-vascular plants emerges out of the gamete producing form (gametophyte) and is generally short-lived and is sometimes completely embedded in gametophyte tissue. Although they are sometimes green and photosynthetic, they have no flattened parts to increase photosynthetic light absorption and must depend on the gametophyte for carbohydrates during some or all of their existence. In hornworts, the sporophyte is a thin cylinder that splits open longitudinally, from the tip, to release spores. In liverworts and mosses, the most common sporophyte form is a ‘ball on a stick’, with a roughly spherical spore producing structure (sporangium) at the end of a stalk that in most cases serves to elevate the sporangium to a higher position, presumably to aid in spore dispersal. However, in some liverworts (e.g., Marchantia) and mosses (e.g., Sphagnum) it is a structure on the gametophyte that actually provides the elevation.  The sporangium opens to release spores by splitting apart (liverworts) or through an opening (mosses) whose size is regulated by teeth that move in response to humidity, closing the opening under humid conditions. In some liverworts the sporophyte is extremely small and although it is not elevated, its stalk is produced in an umbrella shaped organ (the archegoniophore) that is elevated.

Although non-vascular plants are clearly successful, existing and thriving in most terrestrial habitats, their size and activity is impacted by their limited ability to grow upwards.  This inability was  overcome with the appearance in vascular plants with the appearance lignified cell walls that can resist the force of gravity and the appearance   of vascular tissues possessing cell types that make possible long-distance transport of water and carbohydrates. Vascular tissue allowed terrestrial autotrophs to exist as two connected entities, both essential to the other: a water and nutrient absorbing structure and a photosynthetic structure. The three organs of vascular plants, roots, stems and leaves, reflect the basic biology of terrestrial autotrophs: leaves acquire sunlight and carry out photosynthesis to ‘feed’ the organism, roots explore the soil and acquire the water and nutrients that is required for photosynthesis and growth, and stems connect the photosynthetic part with the water-and-nutrient acquiring part and also serve to distribute leaves effectively in their aerial enviro nment. Each of these three organs possess three fundamental tissues: a ‘skin’ (dermal tissue), transport tissue (vascular tissue), and ground tissue (everything else, the tissue that fills the spaces between dermal tissue and vascular tissue).

Cells of vascular plants show substantially more specialization than is found in non-vascular plants and multiple cell types have been defined, primarily on the basis of the following features, summarized in Table 1.

These features are summarized below. Specific cell types will be considered in more detail when considering the functioning of these tissues. 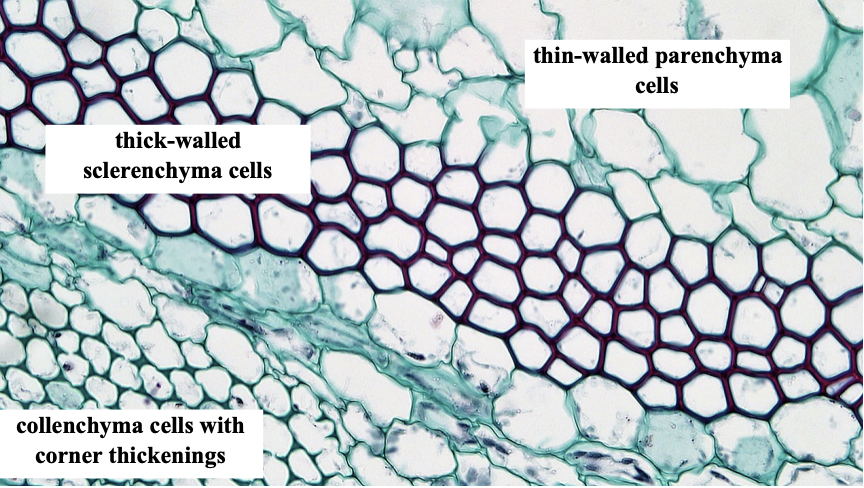 On the left: Tracheids are elongate cells with a secondary wall and large lumen. The cells overlap each other along the long axis of the plant. Individual cells are not lined up in stacks

On the right: Vessels tube members are also an elongate cell with a secondary wall but they stacked on top of each other, the top of one cell directly underneath the bottom of the next cell. The junction between cells has holes, forming a ‘perforation plate’.  The name for the stack of cells is a vessel. The individual cells of a vessel are called vessel tube members or vessel tube elements. By and large, vessel tube members are shorter and have a bigger diameter than tracheid cells.

The three basic organs of vascular plants are roots, stems and leaves but commonly these organs have become specialized for specific functions and do not look ‘typical’.  The most readily observed of these are stems devoted to reproductive structures: the flowers of angiosperms and the cones of conifers, clubhouses.  Generally these specialized stems have specialized leaves that may or may not be recognized as such.  These structures are considered in more detail in chapter 14 and 15 dealing with reproduction.  Stems and also roots are often modified to store carbohydrates, with the modification usually involving a simple enlargement of the structure, e.g. the root of a carrot, the stem of kohlrabi, the leaves that form onion bulbs.  Often the specialized structure is produced in a specialized way, e.g. potatoes are modified stems but they are produced below ground, onions and cabbage are both round structures formed by densely produced leaves either above ground (cabbage) or below ground (onions).  Gardeners are familiar with such structures: corms are enlarged stems, bulbs are stems with enlarged leaves, tubers are below ground stems.  Several of these features are discussed in the Chapter 10 on vascular plant form and also in the organism fact sheets on potato, clubmosses and horsetails.

Protective structures (thorns and spines) may be produced as specialized stems or specialized branch systems.

A Few Other Types of Cells

Guard cells are special cells found in pairs in the epidermis of leaves of vascular plants. Guard cells operate to open pores called stomata in the leaf that allow carbon dioxide to enter. Guard cells change shape as they take up (or lose) water and pressurize or depressurize. The changes in shape cause an opening to appear or disappear in the space between the pair of guard cells (discussed in Chapter 22)

As introduced in the previous chapter, these cells are associated with sex and reproduction. Sometimes they have special structural features, but most significant are their abilities and potentials. They are found in most of the groups considered here  and are considered further in Chapter 11 and other chapters dealing with reproduction and also in the organism fact sheets.

Websites with excellent pictures of seed plant cells and tissues: