A tale of two Hemlocks

Eastern hemlock (Tsuga canadensis) is a common tree in the northeastern U.S. It is the only conifer that is common in eastern deciduous forests. Other conifers do occur in the eastern forests, on sites where they have been planted, or in specific habitats (higher elevations in the mountains, areas with sandy or boggy soils), or early in a successional sequence where they are eliminated with time. Western Hemlock (Tsuga heterophylla) is found in the Pacific northwest and generally occurs in coastal temperate rainforests. Other hemlock (Tsuga) species occur in Japan/China/Korea. 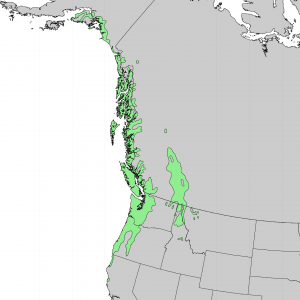 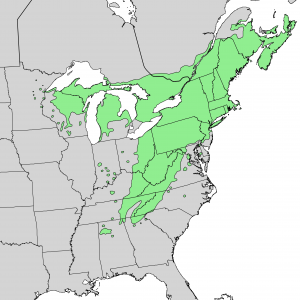 Hemlock is a gymnosperm, a seed producing plant that does not have flowers. Gymnosperms are not considered monophyletic and therefore it is not a phylogenetic entity. The four groups that used to be lumped as gymnosperms (conifers, ginkgo, cycads and gnetophytes) are no longer grouped together unless the largest seed bearing group, angiosperms, is included as well. Hemlocks are in the pine family (Pinaceae) of the conifer phylum (Coniferophyta); other members of the Pine family are pines, firs, spruces and larch and other members of the Coniferophyta are junipers, redwoods and cedars. There are about ten species in the genus Tsuga.

Hemlocks are typical woody plants, with a main trunk capable of extensive secondary growth and reaching substantial girths and heights. Eastern hemlock can often reach 30 m and western hemlock more than twice that height, making it one of the tallest tree species. These are long-lived organisms, with Eastern Hemlock reaching over 500 years in age and western Hemlocks over twice that age.

Hemlock produces seeds in small (~2 cm), woody cones that earlier are the site of meiosis and female gametophyte development, including the production of eggs. Male gametophytes (pollen) are produced in separate cones that are much smaller. Pollen is dispersed by the wind and completes its development inside the female cone, producing sperm that fertilize the egg. The seeds are small (1-2 mm), winged, and dispersed by the wind.

Hemlock is a typical photosynthetic autotroph. Western hemlock occurs in coastal evergreen rainforests in habitats with relatively mild winter temperatures and where being evergreen has a distinct advantage.  Eastern hemlock is unusual in being an evergreen species in a forest that is dominated by deciduous trees. It may gain some advantage by being able to acquire carbon in the winter but often photosynthesis is limited by low temperatures and especially by reduced water transport when it is below freezing and water transport is restricted. Both species are known for being extremely shade tolerant, meaning that they can stay alive (have a positive carbon budget) in spite of low levels of light, this would require low respiration rates. 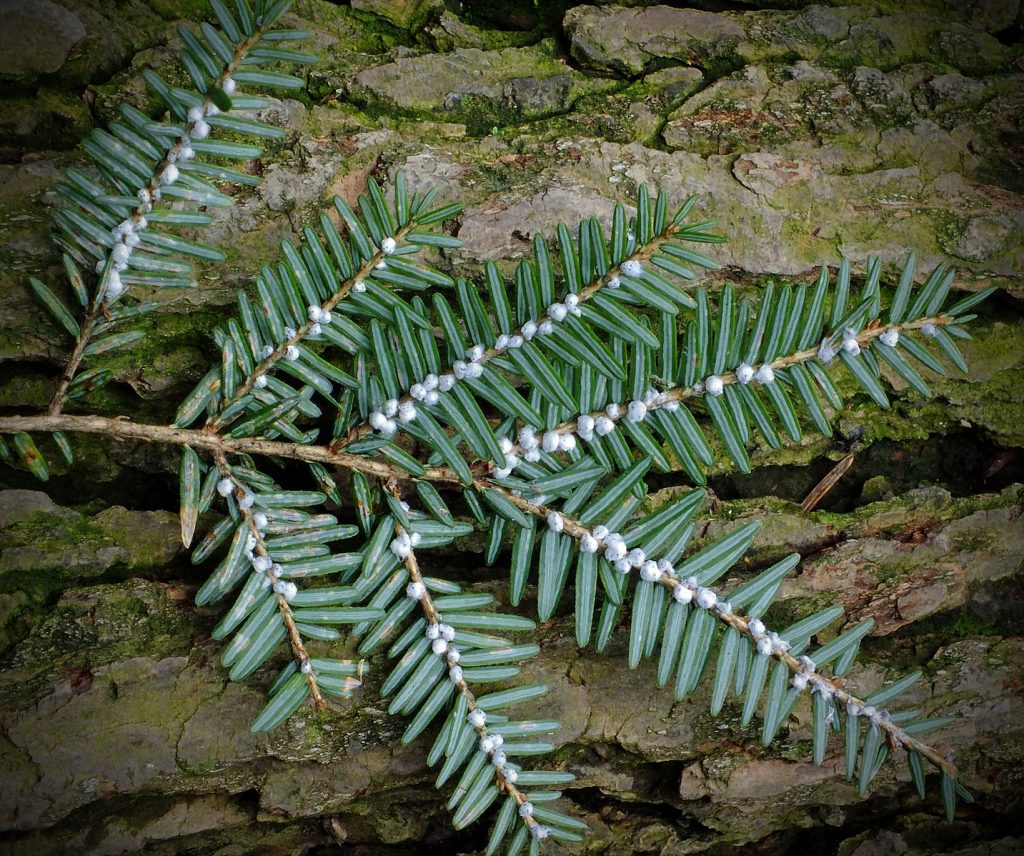 An introduced insect species, the hemlock wooly adelgid (HWA), is causing significant mortality of eastern hemlocks, especially in the southern part of its range. The HWA exclusively feeds on hemlock species. Closely related to aphids, adelgids are sedentary insects that feed on phloem sap, using a stylet to penetrate phloem sieve tubes. They then acquire carbohydrates when the pressurized phloem sap is pushed into the insect’s body, similar to the way that pressurized capillaries of mammalian circulatory systems allow mosquitoes to acquire a blood meal. In neither case is the insect ‘sucking’ fluids, it is merely tapping a pressurized ‘pipe’. In the far east, where the HWA is native, its population are controlled by predatory insect species and there is hope that introduction of these predators may help control the pest in North America.

Although a common tree, the eastern hemlock is not commercially useful. Its wood has a a number of features that make it ill-suited as lumber or pulp (for making paper). In contrast, the western hemlock is a highly desirable lumber species with considerable strength and a straight grain. Western hemlock pulp makes high quality paper. In the 18th and 19th century the bark of eastern hemlock was a source of tannins.  Tannins are group of chemicals that are important both to the plants that produce them and for humans utilizing the plants. For plants, tannins are bitter tasting and deter feeding because of this. However, if eaten, tannins can interact with digestive enzymes and thereby impede digestion. Herbivore avoidance of tannin containing plants may be a learned and/or evolved consequence of these effects and not simply a ‘dislike’ for the taste. To humans, tannins actually provide a desirable bitterness to (at least some) humans and consequently are desirable at a certain level in tea, chocolate, wine and other consumables. Another use for tannins is the process of tanning leather, where the ability of tannins to interact with proteins, specifically the collagen found in animal skin, allows tanning to make animal hide more supple and less prone to decay.

Some fungi apparently like the taste of hemlock, Gamoderma tsugae, the hemlock varnish fungus, is distinctive because of its shiny, glossy surface. As the name implies, it grows (i.e. eats) hemlocks, although it occasionally is found on other conifers. Gamoderma tsugae is closely related to Gamoderma lucidum, known as Lingzhi (Ling Chih) in China and Reishi in Japan which is highly valued medicinally.