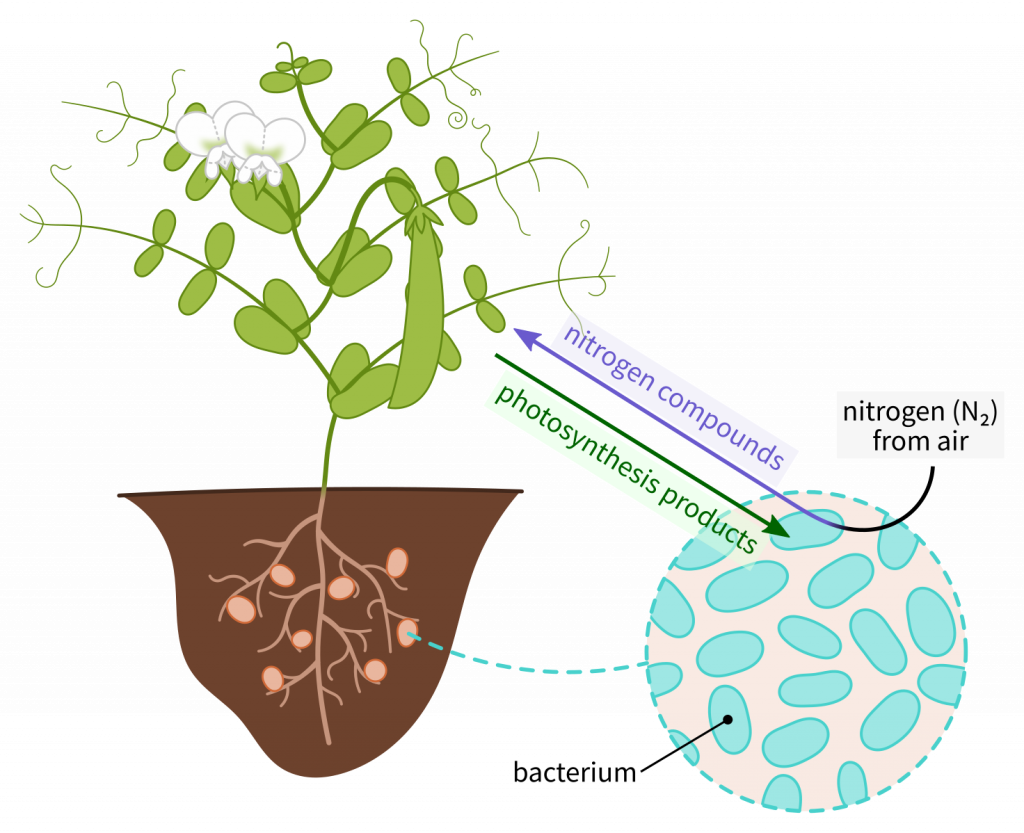 Rhizobia are one of several group of bacteria capable of ‘fixing’ nitrogen, i.e. converting dinitrogen gas into ammonia and then into organic molecules such as amino acids. Because of this ability, nitrogen fixing bacteria are significant conduits between an extremely large pool of nitrogen in the atmosphere and living things who otherwise could only obtain nitrogen by recycling it from existing pools of organic nitrogen (e.g. amino acids, ammonia, nitrate and nitrite). Unlike many nitrogen fixing bacteria that can fix nitrogen when ‘free-living‘ (i.e. when not living inside a host plant) Rhizobia can only fix nitrogen when associated with a plant that provides it with carbohydrates. The carbohydrates provide energy for a process that requires substantial inputs of energy (both ATP and the reducing power of NADH). Rhizobia only associate with legumes, members of the pea family. (But not all legumes associate with Rhizobia and some that have nitrogen fixing associates may have bacteria other than Rhizobia). 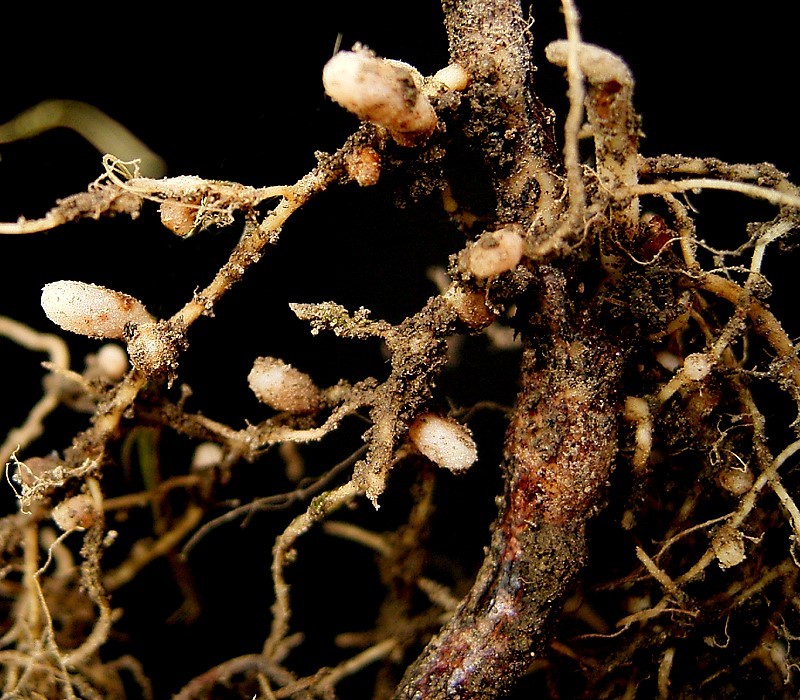 Rhizobia are members of the Domain Bacteria. They are gram negative bacteria that are usually flagellated and motile. The ability to associate with legumes, like the ability to fix nitrogen, is NOT thought to be significant phylogenetically. The ability to fix nitrogen appears to have evolved separately several times (i.e. convergent evolution) as evidenced by its presence in Archaea, Cyanobacteria (see Nostoc) and several other bacterial  groups not phylogenetically related. Similarly, the ability to associate with legumes (which might be considered a type of parasitism) is thought to have been transferred horizontally and consequently is not a good indicator of phylogeny (which reflects vertical gene transfer). The Rhizobia group is thus considered to be paraphyletic.

Rhizobia are rod shaped bacteria, 0.8 um in diameter and 2 um in length, often with flagellae. They assume a different shape when inside their host, being irregularly shaped or often ‘Y’ -shaped. Their presence nearby a root induces a novel structure within root hair cells called an infection thread. Sensing the presence of Rhizobia, root hairs curl and bacteria are lodged in the crook of the curl. At this point the root cell wall is degraded and the bacteria proliferate in a space outside the root hair cell membrane. A tubular ‘infection thread’ is then produced and grows down the outside of the root hair and into the root itself. The thread is bounded cell wall materials and essentially is an elongate invagination of the cell wall, with materials contributed both by the plant and by the bacteria. The infection thread eventually fuses with cell membrane at its base, adjacent to the root cortex. The infection thread then extends to enter (infect) cortical cells, inside of which the bacteria proliferate. As the thread develops the cortical cells de-differentiated and become meristematic, producing the tumor (nodule) that characterizes Rhizobium infection of roots.

Like all bacteria, Rhizobia are not sexual but they are capable of exchanging genetic material by other means.

Rhizobia are heterotrophs that are capable of associating with photosynthetic plants that will provide them with carbohydrates (‘food’) as well as whatever nutrients (i.e. mineral elements) they need, excluding the nitrogen that they obtain from the air, where it is abundant. Particularly important to the nitrogen fixation process is the element molybdenum. When Rhizobia are living outside of a plant they are typical heterotrophs feeding on dead organic material and use the material obtained both as ‘building material’ for growth and to provide substrates that are oxidized in cellular respiration to provide energy.

The ability to associate with legumes requires elaborate communication (signaling) between Rhizobium and its host plant. Factors secreted by both the plant and the bacteria affect the gene expression and behavior of the other. Among other features, the cells of the gall produce a form of hemoglobin called leghemoglobin that is able to bind oxygen and thereby reduce the levels of  free oxygen, which is a poison to the nitrogen fixation process. Nodules develop vascular connections, allowing the nodules to be ‘fed’ with carbohydrates produced by the host plant. These are used primarily to power the substantial energy demands of the nitrogen fixation process but also provide carbohydrate molecules to which the fixed nitrogen is attached. The bacteria acquire N2 and excrete ammonia that is incorporated by the host plant into organic acids, forming amino acids or other nitrogen containing compounds. There are forms of Rhizobia that are complete parasites, being fed by the plant but providing no fixed nitrogen.