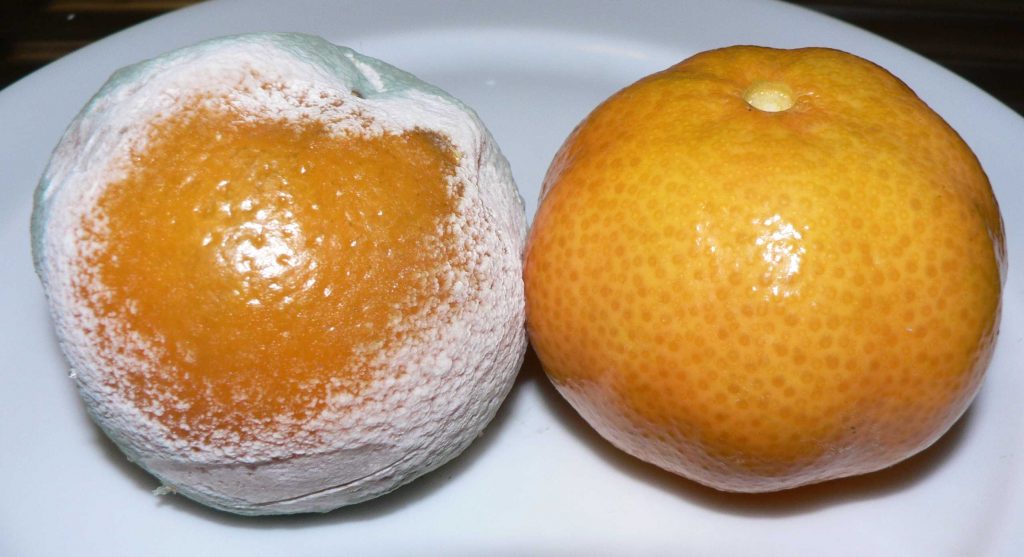 The common molds Aspergillus and Penicillium are of tremendous importance to human endeavors for both positive and negative reasons.

Both are ‘spoilers’ that can destroy crops before harvest or, more commonly, during storage. They also can spoil all sorts of non-food items: leather, clothing, shoes, carpeting, paintings, etc.. Members of both genera produce chemicals that are toxins to other species, including humans. Most well known of such chemicals is the antibiotic penicillin, which is a toxin to many bacteria but is not toxic to (most) humans. Another chemical produced my molds is aflatoxin, which doesn’t affect bacteria but is a toxin and a carcinogen in mammals, including humans. Both genera are of commercial importance in several ways: enzymes from Aspergillus are used to produce citric acid, an additive in soft drinks and a variety of candies, it is also used to produce soy sauce, a fermented liquid used as a flavoring. Besides being used to make antibiotics, Penicillium is used to produce brie, camembert and blue cheese.

Most of the species in the genus Aspergillus and some of the genus Penicillium are fungi for which there is no known sexual stage. Until relatively recently, fungal classification was based almost exclusively on characteristics of the sexual stages. Consequently, fungi lacking sexual stages could not be categorized and were put into a category of their own called the Deuteromycetes or the Fungi Imperfecti. With the use of molecular characteristics these fungi can now be put into phylogenetic categories, and both Aspergillus and Penicillium have been put in the same family in the Ascomycete phylum.

As Ascomycetes, both genera are septate fungi that have a typical filamentous structure of hyphae that form mycelia. The relatively few members that reproduce sexually (usually only rarely) produce small spherical closed fruiting bodies called cleistothecia. What are much more commonly seen are the asexual reproductive structures called conidia. Penicillium produces minute ‘paint-brush’ conidia, with each ‘hair’ on the brush producing small, spherical conidiospores, while Aspergillus produces spherical structures with linear extensions of conidiospores.

All members of these two groups primarily reproduce by means of conidia, asexual spores. The ones that reproduce sexually exhibit sexual reproduction typical of Ascomycetes: dikaryon hyphae are produced after plasmogamy of two different strains; asci are produced in which karyogamy and meiosis occur, followed by mitosis to produce eight haploid ascospores.

Both Aspergillus and Penicillium are generalist heterotrophs, i.e. can feed on a wide-variety of materials, including most crops species. It is a common pest, spoiling corn and other grains while in storage.

Aspergillus and Penicillium are both fast growing and more tolerant of lower humidity levels than most fungi. This allows them to grow in drier situations than other fungi. Additionally, some species can tolerate growth on media that have a high solute content, e.g. the high sugar levels on jams and jellies (high sugar contents generally act as preservatives because many bacteria and fungi cannot tolerate the ‘dry’ conditions that result from high solute levels). Molds might be considered ‘weedy’ fungi, because they grow on a wide variety of materials, in contrast to many fungal species that are much more discriminating in terms of where they will grow and what they will eat.   However, weeds are often poor competitors (chapter 29) yet some species of Penicillium compete very well, at least with bacteria, because they produce a chemical (penicillin) that deters the growth of many bacteria that might be competing for the same food source.

As mentioned above, both genera are used extensively in the production of foods and beverages. While Penicillium is mostly associated with the production of cheeses, Aspergillus is used to make sake (rice wine), soy sauce and miso.  In all of these, the fungus is capable of converting starch in the rice to sugars which are then used to produce alcohol and flavorings.

Aspergillus is occasionally a human pathogen, primarily in people with weakened immune responses.