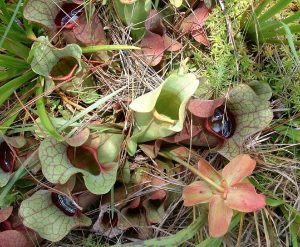 One of the more common groups of carnivorous plants in North America is the genus Sarracenia.  Carnivorous plants of various types have evolved independently at least seven times. One category of carnivorous plants are those that produce pitchers, a structure that collects water and has other features that enhance the likelihood of trapping insects in that water. Carnivorous plants utilizing pitchers evolved independently in several different plant families. Although insects are the primary ‘prey’, occasionally frogs and even mice are captured. Death is not directly caused by actions of the plant but is the result of ‘drowning’ or an inability to escape to feed themselves. Decomposition of the prey is accomplished primarily by microorganisms living in the pitcher but may be aided by enzymes secreted by the plant. In addition to pitchers, carnivorous plants may capture prey by glue mechanisms (e.g. sundews, bladderworts) or mechanical traps (Venus flytrap, bladderworts). Carnivory is associated with habitats that are nutrient poor, generally because the soils are acidic and oxygen-poor (e.g. bogs), conditions where decomposition and the consequent release of nutrients, is limited. The pitchers are habitats on the plant where conditions for decomposition are more favorable and released nutrients are directly absorbed by the plant through the leaves or leaf parts that form the pitcher. 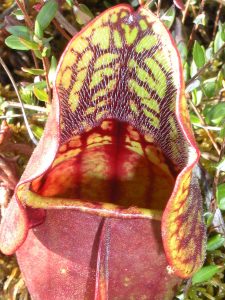 Carnivorory is found in over 500 plant species, in over 10 genera and over 10 families in both the monocot and eudicot groups. There is one species of monocots that produces pitchers but most are edicts, found primarily in two unrelated families, the Nepenthaceae, found in Africa, and the Sarraceniaceae, found in both North and South America. The plants described here are in the genus Sarracenia, which has about ten species, all in North America.

The pitchers are highly modified leaves whose margins are sealed for most of its length, creating a water retaining pitcher with a short unsealed terminal portion forming a flange at the top. Leaves occur in clusters on a short vertical stem rising from a rhizome. Flowers are very large and observers often don’t recognize that they are part of the same plant that is producing the pitchers. 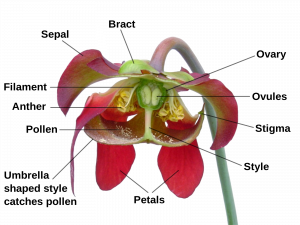 Sarracenia is a typical flowering plant, producing seeds, composite structures with an embryo, stored food and a protective seed coat.  The seeds of Sarracenia have a rather limited dispersal ability. It can also spread vegetatively by means of its rhizomes.

Carnivorous plants nicely reflect the contrast between heterotroph and autotroph nutrition. When heterotrophs ‘eat’ something, they acquire both food (i.e. carbohydrates and other materials to burn in cellular respiration) and also nutrients (i.e. 14 minerals) that all life requires. In contrast, autotrophs make their own ‘food’ (carbohydrates), generally in photosynthesis, and need to acquire minerals in a completely distinct process that requires specialized structures, roots. Carnivorous plants don’t ‘eat’ in the same sense as heterotrophs; they derive no carbohydrates from the process. They ‘eat’ solely to acquire mineral elements because they live in situations where the standard structure of nutrient acquisition (roots) is of limited effectiveness. Pitcher plants have reduced levels of photosynthesis because, although green, leaves are not displayed in a way to maximize light acquisition. If pitcher plants are grown in environments with higher levels of nutrients (available from the roots) they reduce the size and number of pitchers, allowing them to increase photosynthesis.

The pitcher provides a habitat for a variety of decomposer organisms: bacteria, protozoans, water molds and others. In fact the pitchers have their own food webs with not only decomposers but also organisms that feed higher up on the food chain: rotifers, midge larvae and others. Several mosquito species specialize in laying their eggs in pitcher plants and their larvae are often the ‘top carnivore’ in the ecosystem. The midge and mosquito larvae are adapted to aquatic conditions and are not killed in the pitchers. 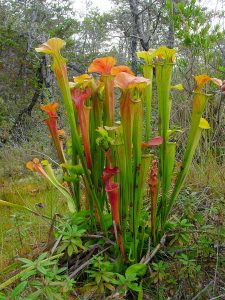