Corallorhiza is a representative of the orchid family.  The orchids are one of the largest families of flowering plants, a group with over 25,000 species. Although the genus Corallorhiza is restricted to North America, with roughly a dozen species, most members of the family are found in the tropics. Probably the most commonly seen orchid in the northeastern US is the pink lady slipper but there are another 10-15 species of orchids that relatively easy to find, although they never are abundant and many occur in restricted habitats, e.g. bogs. Corralorhiza is an unusual angiosperm because it is non-photosynthetic, a characteristic that is very rare within plants in general but does occur occasionally in several plant groups. 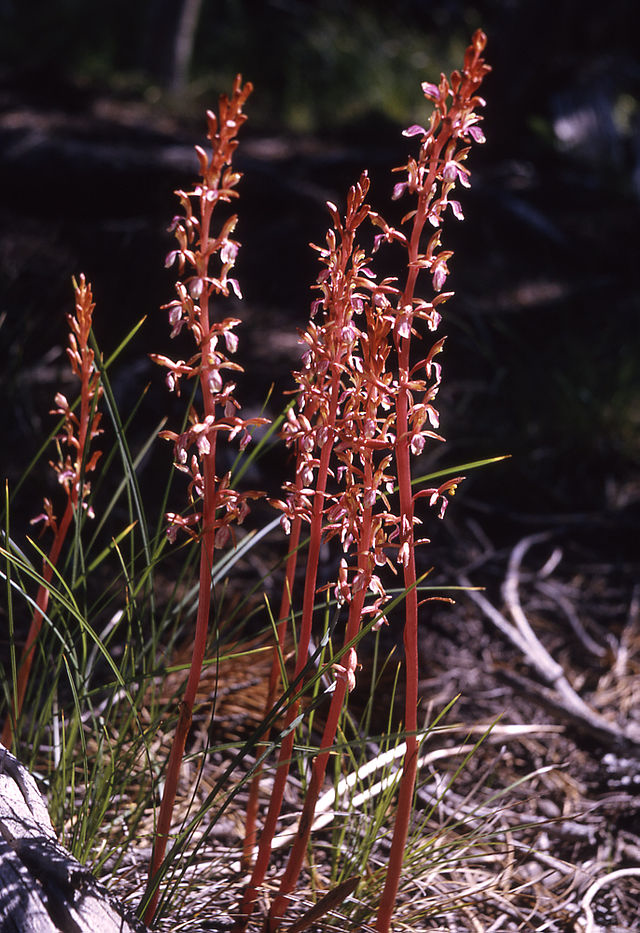 The orchid family is distinctive in a number of ways and its members are generally quite easy to recognize when in flower. They are in the monocot group, which is usually considered a class (remember that families are grouped into orders, orders into classes, and classes into phyla). Monocots are a monophyletic group that is thought to have diverged early (perhaps 130 million years ago) from the rest of the angiosperms. The remaining angiosperms (i.e. all flowering plants except monocots) do NOT form a phylogenic entity and hence modern treatments do not divide angiosperms into two groups (monocots and dicots) but into several groups, the two largest being monocots and ‘eudicots’, a group that includes most, but not all, of the old dicot members. Monocots have a number of features that distinguish them from other flowering plants: a single cotyledon in the seed, lack of secondary growth, flower parts typically in 3’s, and stems with scattered vascular bundles. 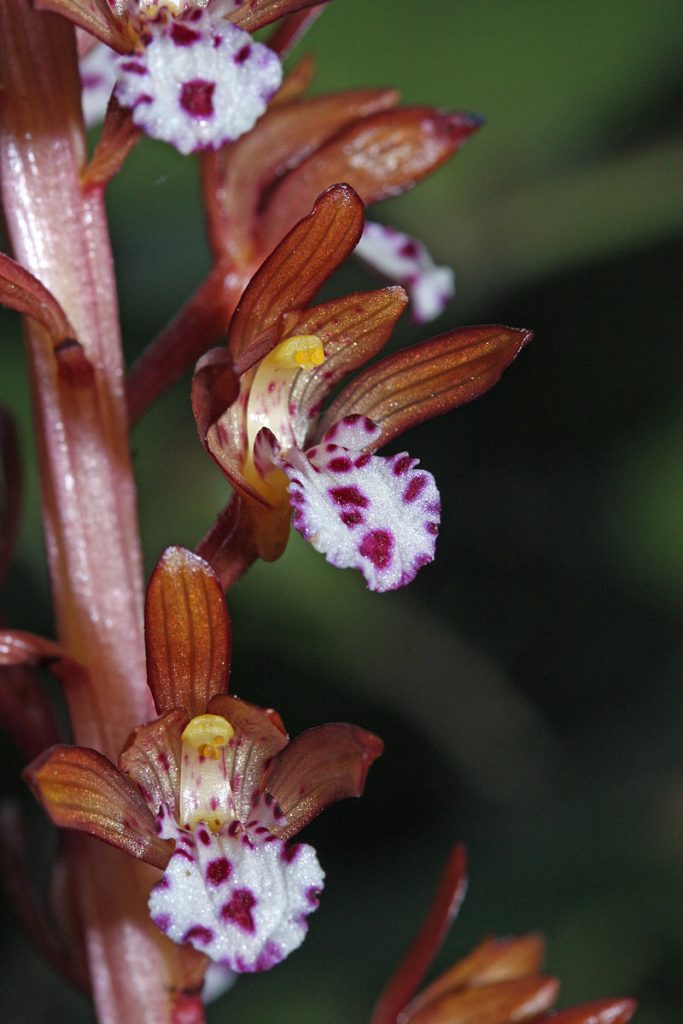 Orchids are herbaceous perennial plants that have several distinct growth forms. Many orchids are epiphytes, plants growing on the trunks of other plants, and may have features including ‘aerial roots’ and ‘pseudobulbs’ which allow them to be successful under these conditions. Corallorhiza orchids do not have a typical orchid structure because they are non-photosynthetic and have very reduced/no leaves while most orchids have very visible leaves that may be stiff, oval and overlapping or sometimes may be grass-like. Many orchids produce rhizomes (horizontal stems running below ground), corms (short, fattened vertical stems) or tubers (enlarged stems that are not oriented vertically).

Most orchids exhibit sexual reproduction that is possible because of elaborate pollination mechanisms that most commonly involve bees or wasps. The flowers of orchids are unusual because pollen is not dispersed as individual grains but rather in large packets (‘pollinia’) that represent the the entire anther of an individual stamen and contain thousands of pollen grains. Seeds of orchids are extremely small, often less than 0.5 mm, sometimes less than 0.1 mm (less than 100 microns). This small size is possible because there is no endosperm, the embryo is much smaller than in most seeds and the seed coat is very thin. Because of the lack of endosperm, the germinating seeds of most orchids must quickly associate with a fungus in order for the fungus to provide the seed with the nourishment needed in order for the orchid to become established. Note that although plant/fungus associations are very common (e.g. in mycorrhizae), the relationship found in in the germinating orchid seeds reverses the normal flow of carbohydrates: in a typical plant/fungus association plants transfer carbohydrates to fungi, but in germinating orchid seeds the flow of carbohydrates is from the fungus to the plant. Once the orchid produces a photosynthetic structure the flow of carbohydrates is reversed; however, this never happens in Corallorhiza because it never produces a photosynthetic structure.

Corallorhiza is a very unusual angiosperm because it is a heterotroph, a parasitic heterotroph, surviving on biomolecules that it does not produce but instead are acquired from a host organism (a fungus) that it associates with. Unlike most orchids that rely on ‘mycotrophy’ (fungus-eating) just during the seedling establishment phase (see above), Corallorhiza plants never become photosynthetic and never produce their own carbohydrates. Their mineral nutrition is also supplied by their host because they produce no roots to explore the soil to acquire nutrients. There are several other unrelated flowering plants with a similar lifestyle, including Indian pipes (Monotropa uniflora) and Snow flower (Sarcodes spp.). There also are flowering plants that parasitize the roots of other flowering plants: beech drops (Epifagus virginiana), witch flower (Striga spp.), and also those that parasitize the stems of other flowering plants: dodder (Cuscuta), mistletoe (Phoradendron, Viscum).

Corallorhiza, and orchids as a group, have two interactions that have already been noted: with fungi during seed germination and with bees and wasps in many elaborate pollination mechanisms. In spite of the fact that there are lots of species, the group is not particularly significant ecologically (i.e. it does not dictate the activities of communities/ecosystems). Orchids have limited economic importance, being rarely used as food, although the spice vanilla comes from an orchids. Orchids have become important to the florist industry (e.g. as corsages) and also as house plants.