Dictyostelium is a ‘cellular slime mold’, (to most) a very unfamiliar organism but one that has proved to be useful as a ‘model organism’ to study significant biological processes, in particular, development. It has a multicellular stage that develops not as a result of a cell dividing repeatedly, producing daughter cells all stuck together.  Instead multicellularity is the result of the aggregation of many individual cells. In addition to its use as a model organism, studying Dictyostelium offers an excellent opportunity to see life from a different perspective, appreciating that although all life is fundamentally the same it sometimes operates in very different manners.

Since they are heterotrophic, mobile and (generally) unicellular cellular slime molds used to be considered ‘protozoa’.  Other early treatments put them with fungi because they produce fruiting bodies and spores. Like a number of other ‘misfit’ groups, the cellular slime molds have been placed in the Protist kingdom, a heterogenous assemblage of eukaryotes that do not readily group with animals, plants or fungi. While certain aspects of their life-cycle are unique, their amoeboid-like stages aligns them with amoebae, that look similar but are always single celled and never coalescing into a multicellular entity. Another relatively close group are the plasmodial slime molds (see Physarum) and some put these three groups (amoebae, cellular slime molds, plasmodial slime molds) together in a group called the Amoebozoa, and the Amoebozoa, along with Choanoflagellates, Fungi and Animals can be united in a group called the Unikonts.

Dictyostelium is eukaryotic and typically exists as ‘amoeboid’ cells that are small (typically ~ 5 um in length), without a cell wall, and capable of ingesting material by phagocytosis. Their normal food is bacteria. Peculiar to the group is the developmental ability of individual cells to come together to form a multicellular entity. Consequently Dictyostelium also exists as a multicellular form produced when cells aggregate into a ‘slug’ ~ 1 mm long. The slug is briefly mobile and then transforms into an immobile vertical structure up to one cm tall with a round spore producing capsule at its top. 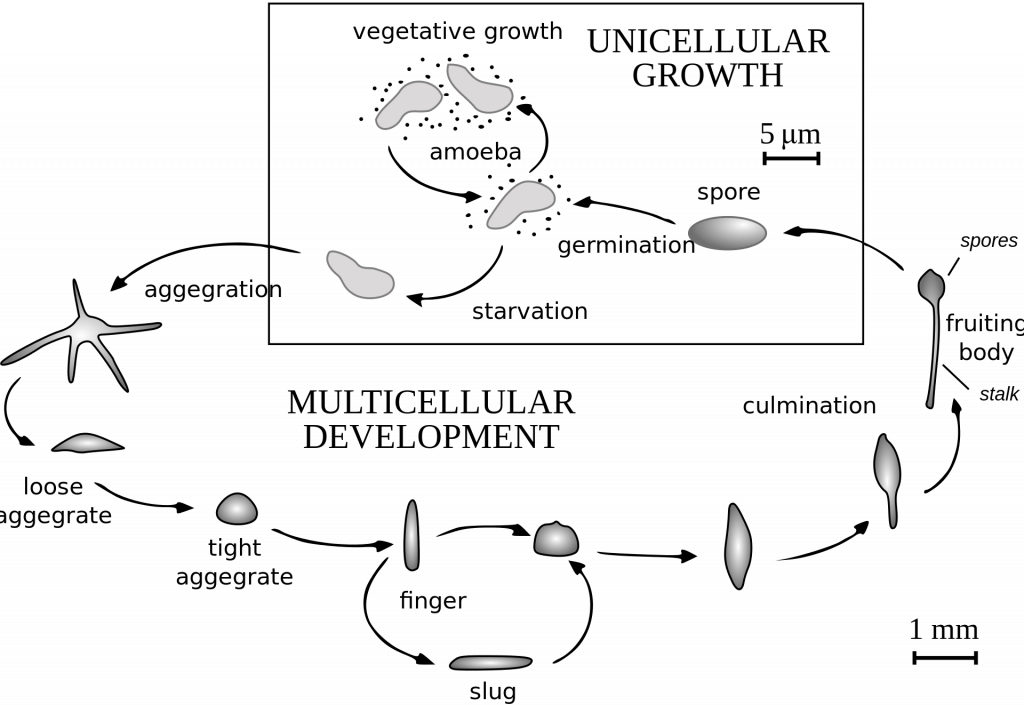 The individual amoeboid cells reproduce asexually by mitosis, but this is only part of the life cycle. The multicellular entity also reproduces asexually: slug—>fruiting body—>spores——>more amoebae—> more slugs. Dictyostelium is capable of a sexual process but does so only rarely, when two amoeboid cells fuse to form a single diploid cell, forming a structure called a macrocyst. Inside the macrocyst meiosis occurs, followed by mitosis and eventually haploid amoeboid cells are released.

Dictyostelium is a predatory heterotroph, capturing (by phagocytosis) other living organisms (primarily bacteria) and using their biomolecules both as a source of energy (oxidizing them in cellular respiration) and also reconfiguring them into biomolecules of Dictyostelium.

One of the interesting interactions involving Dictyostelium is its ‘farming’ behavior, an ability to produce spores that contain the bacteria that it feeds upon. The dispersal of such spores makes it more likely that Dictyostelium will have something to eat after dispersal (see link below).