Chytrids (Chytridomycota) are a group of fungi that are rarely directly encountered, primarily because they are small and they generally eat things that are small.

Chytrids are a distinct group within the fungi and like all fungi they possess a cell wall made of chitin and store carbohydrates in the cytosol in the form of glycogen. The chytrid group is distinguished from other fungi by the fact that they produce flagellated zoospores; flagellated cells are not present in any other fungal groups (an exception is a very small group that has only recently been separated from the chytrids). Chytrids are sometimes described as the most primitive group of fungi, but a more appropriate description might be that they are the group that diverged first along the line that produced four other fungal groups: bread molds (Zygomycota), endomycorhizal fungi (Glomeromycota), club fungi (Basidiomycota) and cup fungi (Ascomycota). 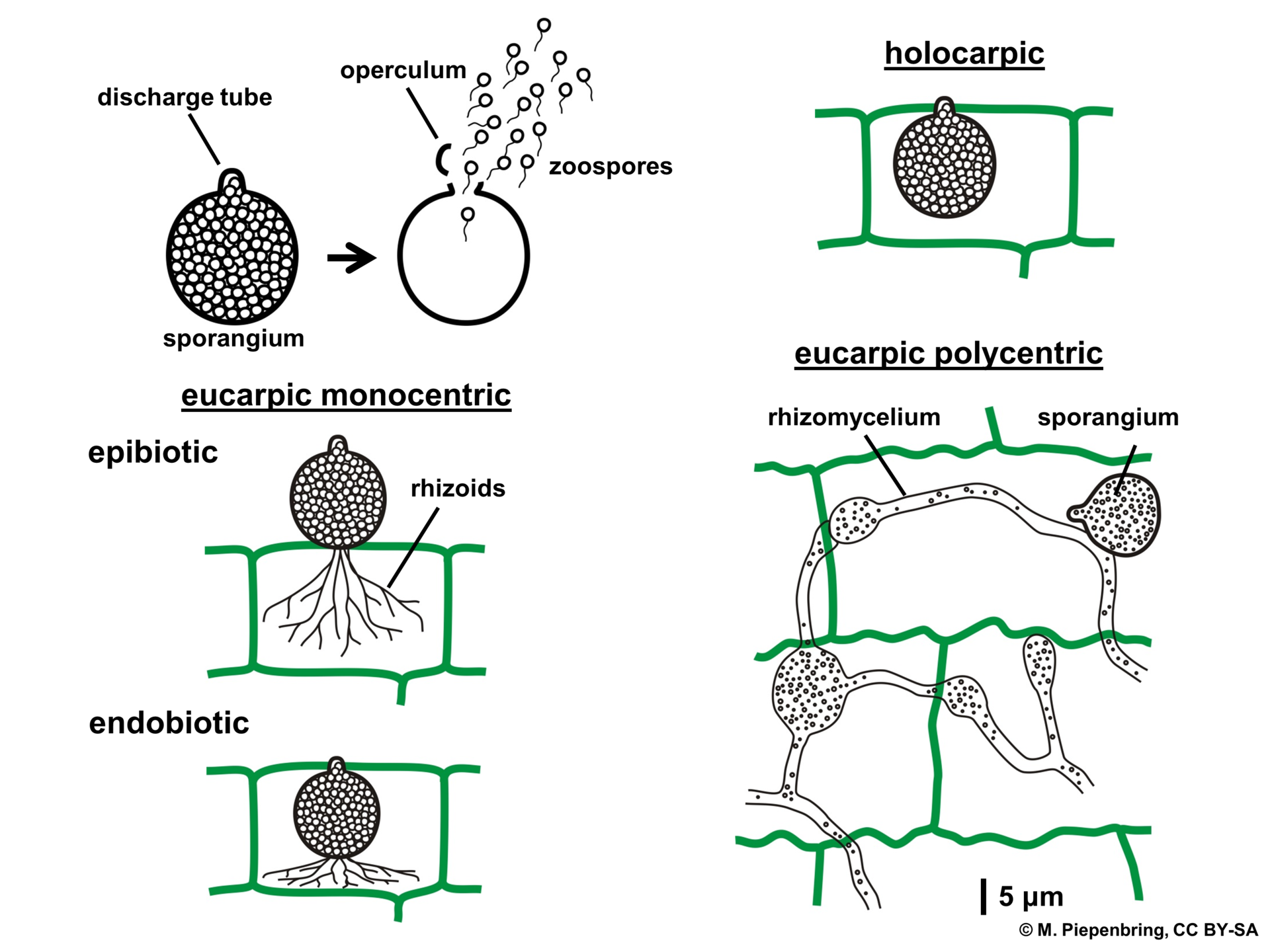 Many chytrids are unicellular: a single cell grows from a zoospore and eventually develops into a single celled sporangium that produces more zoospores (see the ‘holocarpic’ example in the image above). In some species the sporangium develops entirely within a host cell, sometimes producing root-like rhizoids (see the ‘endobiotic’ example). Other species penetrate the host cell and develop rhizoids inside it but produce a sporangium that is attached and outside of the host cell (‘epibiotic’ in the image above). Some chytrids are coenocytic, producing cells with multiple nuclei and sometimes producing short coenoctyic hyphae, cylindrical structures with multiple nuclei (‘eucarpic polycentric’ in the image above).

Some chytrids reproduces solely by asexual means via zoospores. Other species do reproduce sexually, producing gametes capable of fusing (syngamy) and cells capable of undergoing meiosis. A few species exhibit an alternation between a haploid and a diploid generation, as found in plants (Chapter 11).

Chytrids are heterotrophs, like all fungi and like humans. Like humans they sometimes consume dead materials (i.e. are saprophytes) but also may consume living materials, in which case the chytrids may act as a parasite or predator. An interesting aspect of chytrids is that many consume small things: spores, pollen, unicellular algae and protozoans or single cells of multicellular organisms.

Chytrid ability to consume pollen is significant because of the copious amounts of pollen, especially conifer pollen, that is produced in some habitats.

They are an interesting group because, although aquatic, their small size allows them to be successful in the soil in the films of water that surround soil particles.

Some chytrids are significant because of diseases that they cause, most notably chytridiomycosis, a skin disease of amphibians that is thought to have been significant in causing global declines in frog and toad populations, including some extinctions.

Chytrids also cause diseases in plants.