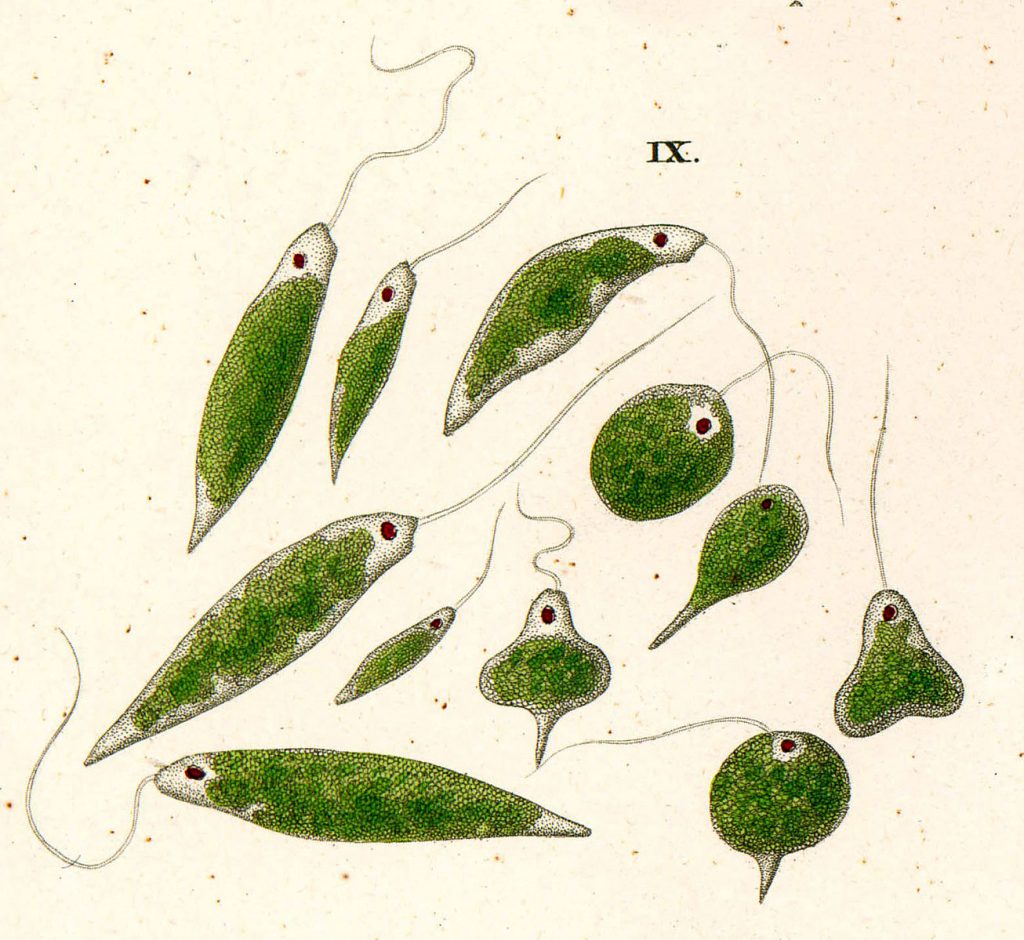 Euglena is a genus of unicellular, freshwater organisms that are very common in ponds and small bodies of water, especially if they are rich in nutrients and consequently high in algae (aka ‘pond scum’). As noted below, Euglena itself is sometimes photosynthetic and is a component of the green sludge in such ponds. But at other times it is non-photosynthetic and is a component of the diverse group of organisms that are eating the green sludge or perhaps eating the other things that eat the green sludge.

Euglena are in a small group (less than 1000 species), that in the past was claimed by both zoologists (because they are mobile and some are heterotrophic) and by botanists (because some members photosynthesize). Accordingly, the group has sometimes called ‘Euglenozoa’ by zoologists (‘zoa’ refers to animals) and has been called ‘Euglenophyta’ by botanists (‘phyta’ refers to plants). In the past  the group has been put in the Protist Kingdom. Recent phylogenetic studies have them diverging very early from other eukaryotes and consequently putting them in a very small group that contains very unfamiliar unicellular organisms. Some close relatives of Euglena include the causal organism for sleeping sickness and for Chagas disease. Complicating their taxonomy is the fact that some in the group are clearly composite organisms, being the product of secondary endosymbiosis when a green algal was consumed but not digested by a flagellate. 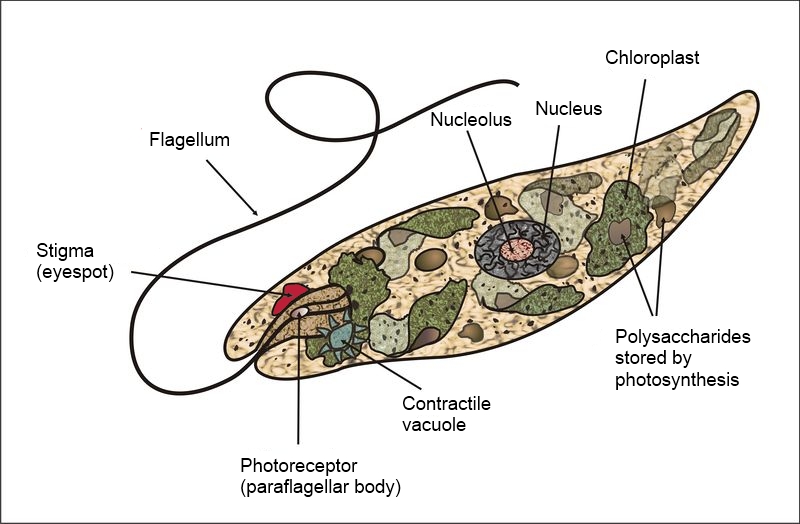 Euglena is a unicellular organism with a complex internal structure that includes a contractile vacuole that can expel water and a red ‘eyespot’. Photosynthetic forms contain a chloroplast. They possess two flagellae, one long, one short, that can allow the organisms to move. Euglena are also able to move by means of changing its shape (see video links). Outside the cell membrane is a flexible, protein-based structure called a pellicle. Although not generally considered a cell wall, it has similar functions in providing some rigidity and strength that the membrane cannot provide. However the pellicle is much more flexible than most cell walls and allows for the change in form that is often seen in Euglena motion.

Euglena reproduces asexually when cells divide. No sexual reproduction has been found within the group.

Sometimes Euglena are a typical photoautotroph s, using the energy of sunlight to synthesize carbohydrates from carbon dioxide and then using the carbohydrates as an energy source in cellular respiration and as building materials to synthesize a variety of biomolecules. Euglenoids store carbohydrates in a different glucose polymer than typical starch — the glucose units are combined in a 1,3 linkage, rather than the 1,4 linkage found in normal starch. Euglenoids may also behave like heterotrophs and acquire material by ingestion (phagocytosis) or by absorption of solutes from its aquatic environment. Some forms of Euglena lack chloroplasts and are solely heterotrophic.

Euglena can be important components of certain aquatic environments and play a role as both a primary producer, eaten by other organisms, and also as a decomposer (heterotroph) that consumes other organisms and breaks them down, or consumes dead organic material and breaks it down.