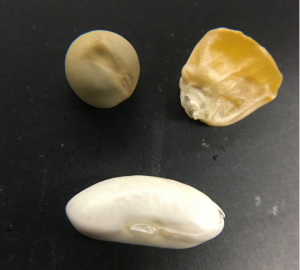 Fig. 1 Familiar seeds of pea, corn and bean have been selected for thousands of years for large size. 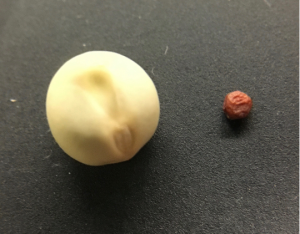 Fig. 2 Many seeds are much smaller than the pea, corn, or bean seed. This figure compares a pea seed to a typical mustard seed.

Superficially, the production of seeds (Fig. 1-2) resembles the production of offspring in familiar animals: inside a diploid parent there develops a member of the ‘next generation’, which is nurtured inside its parent during the critical early stages of development and then is deposited outside its parent to finish its life. But appreciate that all plants exhibit an alternation of generations, so if a diploid (sporophyte) plant produces a new diploid (sporophyte) plant in a seed, one must account for the haploid gametophyte generation that had to come in between the two sporophyte generations. And one must also appreciate that seeds are NOT a substitute for spores, in fact, spores are critical to the production of seeds. The appearance of seeds (both in the sense of evolution and in the sense of development) is a complex story, one that involves the pattern of ‘alternation of generations’ shown in all plants. In light of this pattern, seeds represent a ‘babushka’ (Russian doll) with multiple generations found inside each other. An appreciation of this ‘generation within a generation’ is essential in understanding ‘how seeds came to be’ both evolutionarily and developmentally.

While it was long assumed that a structure as complex as seeds evolved once, many now feel that seeds evolved multiple times. Seeds therefore may represent an example of convergent evolution, where multiple lines have converged on a common feature. Whether or not this is actually the case, we can cite several features that allowed seeds to evolve and some of these features are exhibited in groups that do not produce seeds. Central to the appearance of seeds, in both a developmental and evolutionary sense, is the appearance of ovules, dynamic entities whose composition changes, ultimately ending up as a seed. In this chapter, we consider the transformations in the life cycle of plants that allowed for the development of seeds. In the next chapter, we consider the specific structures and patterns seen in conifers and flowering plants. Although we are focused on the seed, we will also consider a companion entity that is essential for the development of seeds: the pollen grain, which we will see is a miniaturized mobile, male gametophyte.

A seed consists of three components: an embryonic sporophyte plant, a tissue that provides nutrition to that embryo, and a ‘seed coat’, the container tissue in which the embryo and nutritive tissue develop. The embryonic plant is diploid and it develops from a zygote formed by the union of egg and sperm. The seed coat is also diploid and it also is derived from a sporophyte plant, but it is an earlier sporophyte generation than the embryo. In both a temporal and also in a physical sense, a seed is a generation ‘babushka, a Russian doll’, with ‘nested’ generations. There are two sporophyte generations, the older one (seed coat) on the outside, and the new one (embryo) on the inside, with a gametophyte generation, or remnants of one, sandwiched between them. Seeds are the consequence of the megaspores not being dispersed but instead being retained in the sporophyte that produces them. The spores germinate and egg-producing female gametophytes are consequently present on/in the sporophyte. Later, embryos, resulting from the fertilization of eggs produced by the gametophytes, are also present on/in the sporophyte. The structure where the retained spore is located and where the seed ultimately develops is called an ovule. Ultimately ovules develop into seeds containing a new sporophyte ‘packaged’ in the seed coat, a tissue derived from the original sporophyte. Prior to this, an ovule contains a female gametophyte; prior to this, ovules contain a spore that produces a female gametophyte; earlier still, they contain a megaspore mother cell that produces that spore. Finding gametophytes, both male and female, and understanding their development is key to the understanding of both the evolution and development of seeds.

We can describe the transformations that allowed for the evolution of seeds and also allow for the development of seeds with the acronym RRAPP: Reduction, Retention, Arrested development, Provisioning, Packaging.

There are multiple retention steps involved in the production of seeds and only the final steps are specific to just seed plants. First, there must be retention of the egg in the organism that produces it. In organisms that have gametes differentiated into a ‘sperm’ (a mobile, usually flagellated, cell that is released from the organism that produces it) and ‘egg’ (defined as a gamete that is larger and immobile), retention of the egg is often (e.g., Oedogonium, water molds), but not always (e.g., Fucus), the case. Retention of the egg requires that fertilization occurs in/on the egg-producing organism. This is the case for mammals. For organisms that show alternation of generations, this means that the egg is fertilized in the gametophyte. The next retention found is a characteristic of all plants and is why the group is sometimes referred to as ‘embryophytes’. It is the retention of the zygote, and the embryo that grows from it, in the female gametophyte plant. The retention of the egg, zygote, and embryo in the gametophyte allows the early development of the diploid generation to occur in a more controlled environment, with resources provided by the gametophyte. Note that this retention results in a sporophyte growing from a gametophyte, again something that is found in all plants.

An essential aspect of reproduction is dispersal. Especially for plants, with their indeterminate lifestyle, reproduction is of little significance unless there is a potential of dispersing to a new location. Dispersal is a significant aspect of sex as well. Although the processes of syngamy and meiosis can generate variability even when self-fertilization occurs, it is far more effective in producing variation, the raw material of evolution, if genetically distinct organisms participate. For sedentary plants, this requires movement of one individual to another, i.e., dispersal. For non-seed plants, dispersal is affected by two dispersal agents, the spore and the sperm. Spores have a tremendous dispersal ability because they are small and can be (generally) dispersed by the wind over large distances. This is only possible because the living thing inside the spore, the single cell, is extremely ‘life-less’; that is, if one were to observe it, one would see very little biological activity. Metabolism is minimal, very few chemical reactions are occurring; it is a very stable structure and is in a state of ‘suspended animation’, the normal functions of life have been suspended temporarily. These life functions resume if the spore reaches a habitat that can trigger spore germination, which returns the spore to the animated state. In contrast, the other mobile agent of non-seed plants, sperm, are highly animated, they have a very substantial metabolic rate, not just because of their mobility (metabolism is required in order for the flagella to move) but their overall structure, in terms of organization of the membranes and cytosol, is much more typical of living things than that of dormant spores. Sperm are consuming stored energy supplies (‘food’) in order to sustain their life functions. Since sperm have a very limited ability to acquire food, their lifespan is set by the amount of the stored reserves that they are provisioned with when dispersed. The consequence is that sperm do not live very long and do not move very far.

Seed plants also have two dispersal agents: the seed and pollen. Both of them are ‘in suspended animation’ in the same way that spores are. This allows both of them to travel substantial distances. It is significant that both the seed and the pollen are not single cells, they are partially developed organisms that have begun their development on a ‘parent’ plant, yet have arrested their development and entered a ‘resting stage’ where they can survive adverse conditions and live without any additional resources. While the production of dormant cells (e.g., spores) are found in diverse groups of organisms, arresting development of a multicellular organism and having it enter a dormant stage is much less common, but it is essential to the development of seeds. Male gametophytes start their development inside the sporophyte plant when microspores are produced and develop into pollen. They are then dispersed in a dormant state, only to be revived if they reach the site of a female gametophyte, located on/in a sporophyte plant. Here, their development resumes, and they are able to produce a cell that can fertilize the egg.

Similarly, the new sporophyte generation found in a seed exhibits arrested development. After fertilization, the zygote that is produced generally quickly divides and develops into an embryo with a root/shoot axis, root and shoot apical meristems, and one or two leaves that are ‘seed leaves’ = cotyledons. Then the development ceases, no cell division or differentiation occurs in spite of the fact that nutrients are available and environmental conditions are favorable, at least temporarily. The metabolic rate drops to very low levels and the tolerance of the embryo to extremes in temperature, etc., substantially increases. In this state, the seed is dispersed, and it only resumes growth and development if conditions favorable to germination are met.

Seeds contain nutrients, both nutrients that can ‘supply energy’, i.e. materials that can be used in cellular respiration, and nutrients that are building materials for the construction of more plant cells. These energy and material supplies are very significant to a young autotroph because ‘it takes money to make money’: in order to feed itself a plant needs structure but the structure isn’t possible without energy and material supplies. Provisioning allows an organism to produce a structure that can obtain matter and energy on its own. Provisioning is accomplished in spores, but to a lesser extent; they do possess some materials, but the quantities are limited because the spore is generally only a single cell and generally small in size to promote dispersal.

Seeds are provisioned with materials that are stored in several different tissues:

Wherever/however they are stored, the nutrients come from the parent sporophyte plant via phloem tissue. Careful examination of developing seeds will reveal that each is attached to the parent plant via a vascular thread.

Seeds are eventually dispersed as a package inside of which is an embryo and stored food. The outside of the package (the seed coat) develops from sporophyte tissues of the parent plant that are called integuments, one or several layers of sporophyte tissue that form the outer layers of the ovule. Part of the transformation of an ovule into a seed is the transformation of the integuments (or part of the integuments) into a seed coat. The seed coat develops through a process of cell division and differentiation to form what is usually a rigid outside coating of the seed. These cells usually have thick secondary cell walls.

Thus, a seed is an embryo and stored food enclosed in a seed coat. The development of a seed, also known as the ripening of an ovule, involves three distinct developmental processes:

Plants with seeds have been successful for multiple reasons including: (1) the early development of the sporophyte occurs in a very protected location inside of the previous sporophyte generation, (2) two items are dispersed: pollen, whose dispersal is focused on getting gametes together, and seeds, whose dispersal is focused on getting the next generation of sporophytes to new locations, (3) seeds are dispersed in a package that generally contains substantial quantities of nutrients, increasing the likelihood that the next sporophyte generation will be able to become established.