Nitrifying bacteria are a group of bacteria that are capable of utilizing ammonia and nitrite as energy sources that allow them to synthesize carbohydrates from carbon dioxide.  They are highly significant to the global nitrogen cycle and to the existence of plants.  They are autotrophs (they eat themselves) and they make ‘food ‘(carbohydrates) by utilizing energy from chemicals rather than from light as photosynthetic autotrophs do.

Consistent with their phylogenetic diversity, these bacteria exist in a variety of forms: rods, spheres and spirals.  Many have extensive internal membrane systems that probably are significant to the biochemistry they accomplish.

Most organisms obtain energy through cellular respiration, a series of biochemical reactions that remove hydrogens from carbohydrates (oxidizing them) and transfer them to oxygen, forming water.  In the process, the energy from carbohydrates is transferred to ATP.  One can think of ammonia as ‘food’, comparable to carbohydrates in being a chemical that can be oxidized in a process that allows its energy to be ‘captured’.  Some nitrifying bacteria are  ‘ammonia oxidizing bacteria’ and they obtain energy as the ammonia is oxidized to nitrite (NO2–).

Each of these groups have members that can do more than just acquire energy in the form of ATP as they carry out these oxidations.  Both These reactions can also be part of a process that allows carbohydrates to be formed from carbon dioxide.  Recall that this happens in the Calvin cycle of photosynthesis where NADPH (a source of electrons, i.e. reducing power) and ATP are inputs in a process that reduces carbon dioxide, forming carbohydrates.  In nitrifying bacteria the net effect of the process is a transfer of electrons from either ammonia or nitrite to CO2:

Organisms that carry out these reactions are considered autotrophs because they eat self-made food and they could be called ‘chemoenergetic autotrophs’ because they utilize chemical energy to make their on food (similarly plants could be considered ‘photoenergetic autotrophs’).  Other organisms in these groups do not make their own food but simply use ammonia and nitrite as a food source to get energy.  They need to acquire reduced carbon to satisfy their material carbon needs.  They could be considered chemoenergetic heterotrophs.

Nitrifying bacteria are extremely important to all vascular plants by providing the preferred form of nitrogen (nitrate) to the soil and allowing nitrogen to cycle rapidly from plants to heterotrophs to nitrifying bacteria and back to plants (Chapter 22). 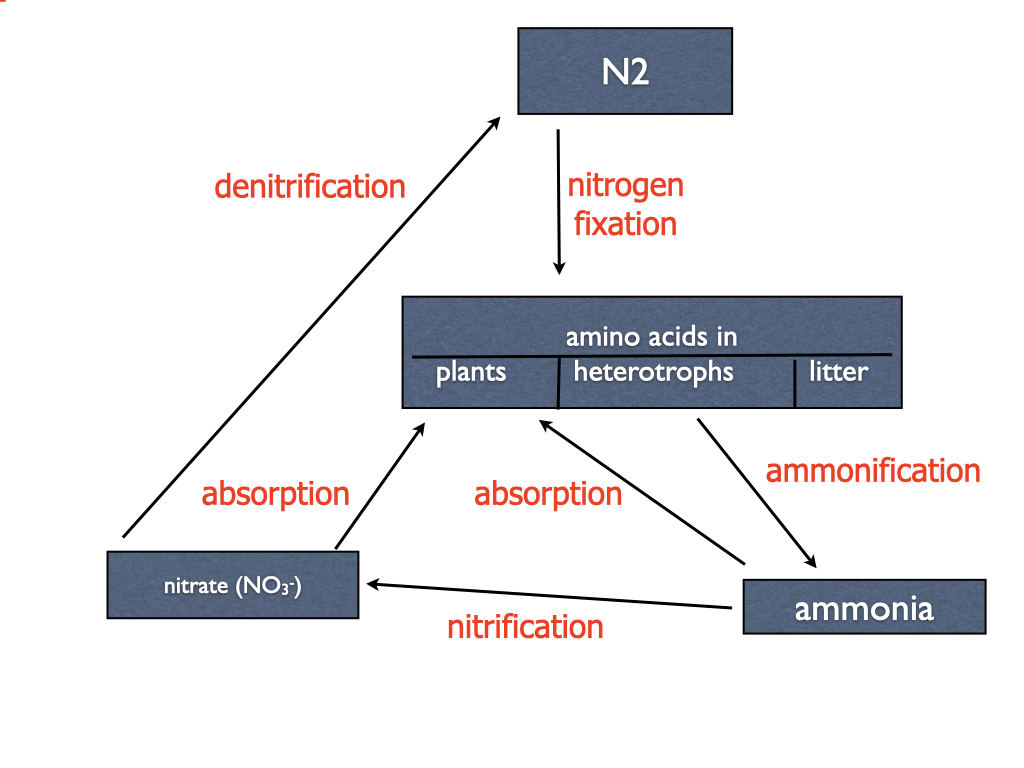 Nitrifying bacteria conserve nitrogen in the soil because ammonia is volatile and escapes to the atmosphere, although in acid soils it gets protonated to ammonium (NH4+) that is not volatile.