Potatoes (Solanum tuberosum) are an herbaceous plant, native to South America, that has been cultivated by indigenous peoples for five to ten thousand years but only became cultivated world-wide in the last 500 years. Grow ing at high elevations of Peru and Bolivia, it was a staple crop of the Incas, who developed a freeze-dry preservation technique, producing ‘chuno’. This was possible in these high elevation sites (10,000 feet or more) where the combination of clear nights and bright sunny days allowed for the freezing and drying. The spread of potato in Europe was slowed because people recognized that it was related to plants that were known to be poisonous, e.g. several species of nightshade. The potato family is interesting in that it has produced a number of important crops (potato, tomato, pepper, eggplant) and also important poisons and drugs (nicotine, novocaine, atropine).

Potato is an herbaceous plant with a typical plant structure of below-ground roots and above-ground shoots with leaves. Like tulips and a number of other plants, the above-ground stem and leaves are ‘annual’, i.e. they die every year. The plant is perennial because a below-ground portion survives and perpetuates the organism. The perennating part is a structure called a tuber, a branch shoot that is produced and remains below ground. These stems do not grow upwards and do not produce leaves but their tips swell and produce tubers.  These  results from the production of much more parenchyma tissue than is found in a normal stem. Tubers (or functionally similar, but anatomically different, structures called corms and  rhizomes) are a common feature that allows plants to survive in areas where the above ground climate is hostile (cold or dry) for part of the year. The above ground portion of the plant dies, but the below-ground part, present in the more favorable (i.e. warmer/moister) environment of the soil, is able to survive and can sprout new ‘normal’ (i.e. upward growing) branches when it ‘knows’ that favorable above-ground conditions have returned. Parenchyma cells of the tuber possess numerous starch storing plastids (amyloplasts) that provide material and energy to power growth when it resumes. The ‘stem nature’ of a potato tuber is revealed in its ‘eyes’,  which are lateral buds, i.e. embryonic branches. They, like the leaves and branches of the above ground stems, are distributed in a spiral fashion around the shoot. Farmers vegetatively propagate potatoes by cutting the tubers into sections with at least one eye and planting them.

Potatoes reproduce sexually by flowers (the flowers are basically the same structure as petunias, a close relative) but are generally propagated vegetatively from the tubers. Although it is grown as an annual crop, it is perennial in the wild.

Tubers are planted in the spring and the tubers are harvested in the fall after the annual shoots have died.

Like most plants, potatoes are photosynthetic autotroph s, acquiring carbon from the atmosphere, water from the soil and another 14 essential elements from ions and solutes dissolved in soil water.

Potato ’s interactions with humans have been extremely significant, both by being the primary food source for several regions and also for the disruption caused when crops failed, disruptions whose consequences were felt for many years in multiple regions (read about the Irish potato famine and its effects on the United States). The causal organism for the famine is late blight of potato (Phytophthora infestans), and the interaction between late blight and potato reveals some interesting features significant to disease interactions specifically and biotic interactions in general:

Other interesting interactions involving potato are:

The Colorado potato beetle shows some similarities to late blight of potato: it feeds on (i.e. ‘has a taste for’) a group of related plants: potato, tomato, pepper, indicating that diet preferences are probably related to the secondary chemistry of the hosts. Like late blight, the beetle originated in an area where potato/tomato was not present but, given the opportunity, developed a taste for these new arrivals.

Tuber formation in potato, something essential for its utility as a crop, involves a complex combination of interactions with the conditions the plant encounters. Tuber formation is is promoted by short day photoperiods, cool night temperatures, and relatively low soil nitrogen levels. 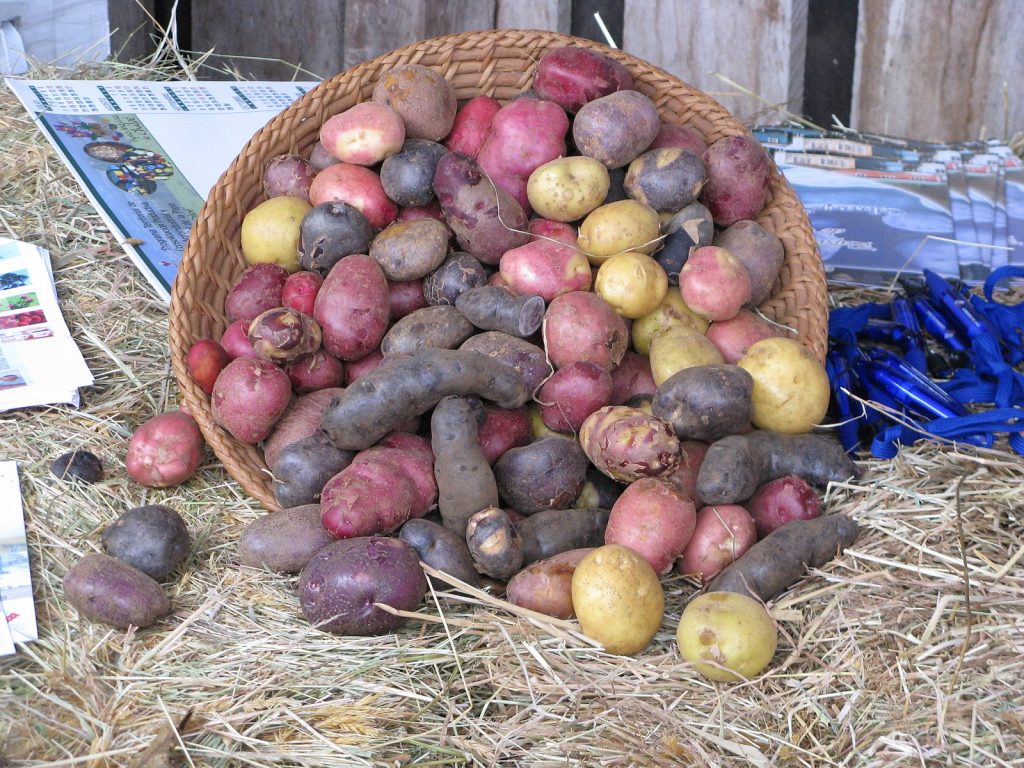 There are many, many varieties of potato and only a small portion of these are available commercially in the U.S. Among other differences (such as color and shape) potatoes also vary in the type of starch present and this can impact their utility in cooking: some potatoes (considered ‘starchy’) have almost all of their starch as unbranched polymers of glucose — this produces a  potato better suited for mashing or baking. Other potatoes (considered ‘waxy’) have a greater portion of their starch existing as branched polymers of glucose, which allows the potato to retain its shape and firmness even after cooking and is better suited for use in potato salads and other situations where it is desirable for the potato to maintain its shape (e.g. in a soup or stew).