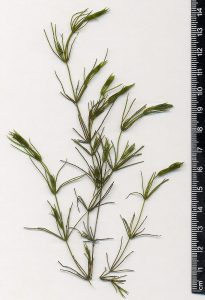 Stoneworts are a distinctive green algae that look quite ’plant-like’.  As is often the case, especially in taxonomy, looks can be deceiving (think convergent evolution).  And, although Chara are among the green algae most closely related to plants, the visual similarity doesn’t actually attest to this.  Instead the connection is justified because of biochemical features (sporopollenin and precursors of lignin), plasmodesmata, the presence of a cell plate during mitosis, the presence and structure of flagellated sperm and, of course, a multitude of molecular data

Stoneworts get their name because they usually have calcium carbonate deposits in their cell walls, a consequence of the hard water (high calcium) habitat that they often grow in, perhaps coupled with their own activities increasing the pH, which can cause calcium carbonate precipitation out of the aqueous solution.  Stoneworts are large algae that can dominate some habitats. 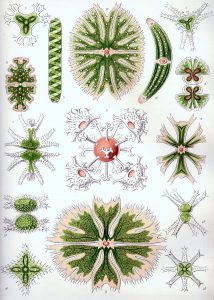 The Green Algae group is in flux.  The group has clear connections with plants but if plants are put in a separate kingdom (Kingdom Planta, of the five kingdom classification), this affiliation is hidden unless the green algae are also placed in the plant kingdom.  Some workers do this.  Others split the green algae in two, putting algae with the closest affiliation to land plants in a streptophyte group, and putting all other green algae (the majority of species) in a chlorophyta group (this would include  the other green algae covered in the ‘Organism’ section of this book:  Chlamydomonas, Oedogonium, Acetabularia,  Calurpa).  Stoneworts would be in the Streptophyte group and although they look ‘plant-like’, other streptophytes do not, e.g. the filamentous algae Spirogyra, or the unicellular desmids.  Stoneworts are usually put in the Characeae family with a group of five other genera besides Chara.

Stoneworts are large algae easily visible with the naked eye and possessing a distinctive whorled form, with a cluster of branches at nodes and elongate internodes separating the nodes.  The internode consists of a single elongate cell up to 10 cm in length which in some species is surrounded by a ring (cortex) of smaller cells.  Particularly significant evolutionarily is that the cells possess plasmodesmata and this is associated with the formation of a cell plate during cell division.  Chara has filamentous rhizoids that attach it to a substrate.  Sexual structures occur as short branches at the nodes and are of two types, both multicellular: egg producing structures and sperm producing structures.

Chara reproduces asexually by producing several different types of structures that can be detached, dispersed and then develop into new plants.  They also reproduce sexually, producing eggs that are retained and mobile, flagellated sperm.  After a zygote is formed (the only diploid cell in the Chara life cycle) it develops into an oospore that is tolerant of adverse conditions and is capable of dispersal.  When conditions are favorable the oospore germinates and undergoes meiosis; three of the four haploid nuclei degenerate with the other one dividing to produce a new haploid plant.

Chara is a typical photoautotroph, using the energy of sunlight to synthesize carbohydrates from carbon dioxide.  It is significant that it often grows in areas with pH values of 7 and above, where bicarbonate is a significant source of carbon dioxide.  Bicarbonate and protons can combine to form carbonic acid and this can be converted to carbon dioxide and water.  This latter reaction is catalyzed by carbonic anhydrase enzymes found in the cell walls of Chara and the reaction also raises the pH and causes the precipitation of calcium carbonate in the cell walls.   In addition to the accumulation of carbon, hydrogen and oxygen in carbohydrates Chara accumulates 14 mineral elements obtained from the solution that it grows in.

Chara is commonly found in hard water (high calcium ion concentrations) environments and sites with brackish waters.  They often form extensive beds and are found in slow moving streams and shallow lakes, especially if the water is clear.  Chara may contribute to that clarity by absorbing and immobilizing nutrients, making them less available for other algae.  While some species of epiphytes (algae that grow on other plants) avoid Chara, perhaps because of allelochemics, some nitrogen fixing cyaanobacteria associate with Chara and may provide nitrogen.  Some species of Chara are considered weeds and may be invasive.  The extremely large cells of Chara and closely related Nitella have been used to study membrane electrophysiology and the behavior of the membrane.