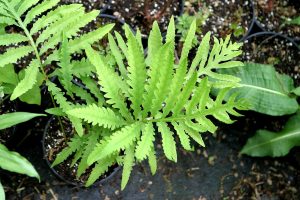 Sensitive fern is a perennial plant with a below ground stem that lives for many years, sending up leaves each spring that senesce and wither in the fall.

Sensitive ferns clearly belong in the fern group, which most workers consider to be a phylum, the Pterophyta. Among other things the group is united in having vascular tissue but not producing seeds. Recently, many workers have lumped horsetails and ‘wisk ferns’ together with the ferns. While horsetails (one genus) and wisk ferns (two genera) are very small groups, the fern group is large (over 12,000 species) and possesses considerable diversity in form. Although most of the members of this group look ‘fern-like’, i.e. they are herbaceous with relatively large leaves that are dissected into leaflets, some ferns look very ‘un-fern-like’, including some that look a bit like clover (Marsilea), some that are tiny/small floating aquatic plants (Azolla and Salvinea) and some ‘tree ferns’ that are over 3 m tall and resemble palms because of their dissected leaves. Fern ancestry goes back to the Paleozoic, 350 million years ago. 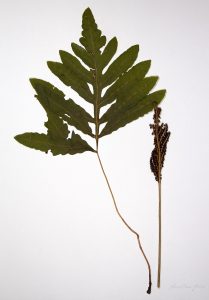 Sensitive fern has an underground stem (rhizome) from which emerge the leaves, which, unlike some ferns, are not distinctly clustered together. While m ost ferns just produce one type of leaf that both photosynthesizes and also can produce spores, sensitive fern is dimorphic, meaning it produces two types of leaves that are specialized in their functioning: green leaves (on the left in the accompanying figure) that photosynthesize but produce no spores and separate spore-producing leaves that do not look much at all like leaves (on the right of the accompanying figure). The below ground stem (rhizome) lives for many years, sending up leaves each spring that senesce and wither in the fall. Other common dimorphic species are Ostrich fern, Cinnamon fern and Marsilea (water clover), while a number of other ferns (Christmas fern, Interrupted fern) have dimorphic leaflets, i.e. the leaflets of some of the leaves are specialized for spore production.

Like all plants, sensitive fern exhibits alternation of generations with a visible sporophyte and hard-to-find bisexual gametophyte that is small, uncommonly seen, and quickly over grown by the sporophyte that grows out from the archegonium. Sperm are flagellated and swim to the egg.

Sensitive fern is a typical photoautotroph, using the energy of sunlight to synthesize carbohydrates from carbon dioxide and then using the carbohydrates as both energy source in cellular respiration and as building materials to synthesize a variety of biomolecules. Note that the spore bearing leaf is in a sense a parasite on the photosynthetic part, relying on it for sugars to supply its energy and material needs.  The same is true of flowers.

Sensitive fern contains a number of toxins and is rarely grazed. It is poisonous to cattle, who by and large avoid eating it. Sensitive fern requires moist, shady conditions. 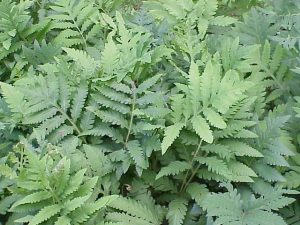 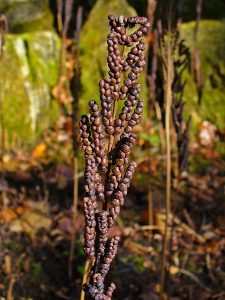