Soybean, Glycine max, is an important annual crop throughout much of the temperate regions of the world but especially in the United States, which leads the world in soybean production, followed by Brazil and Argentina. Much of the U.S. production is exported. Soybean is particular notable because of the many ways it is used. It is eaten fresh and dry. The seeds can be processed to yield soy oil or to make soy milk (produced by grinding soy seeds in water, producing an emulsion of protein and oil). Soy milk is used to make tofu. The insoluble remnants of these extractions are used in animal feed.

Soybean shares a name (the genus name, Glycine) with one of the twenty amino acids, not because soybean is protein rich, although it is, but because of a connection to sweetness. In the 1700’s Linnaeus gave a genus of plants the name ‘Glycine’ because of the sweetness in the root of one of its species (not G. max). In the 1800’s the chemical glycine (the amino acid) was isolated from gelatin, and because of its sweetness the chemical was given the name glycine. The sweetness found in plants of the genus Glycine is not due to the amino acid, it comes from sugars present in the roots. 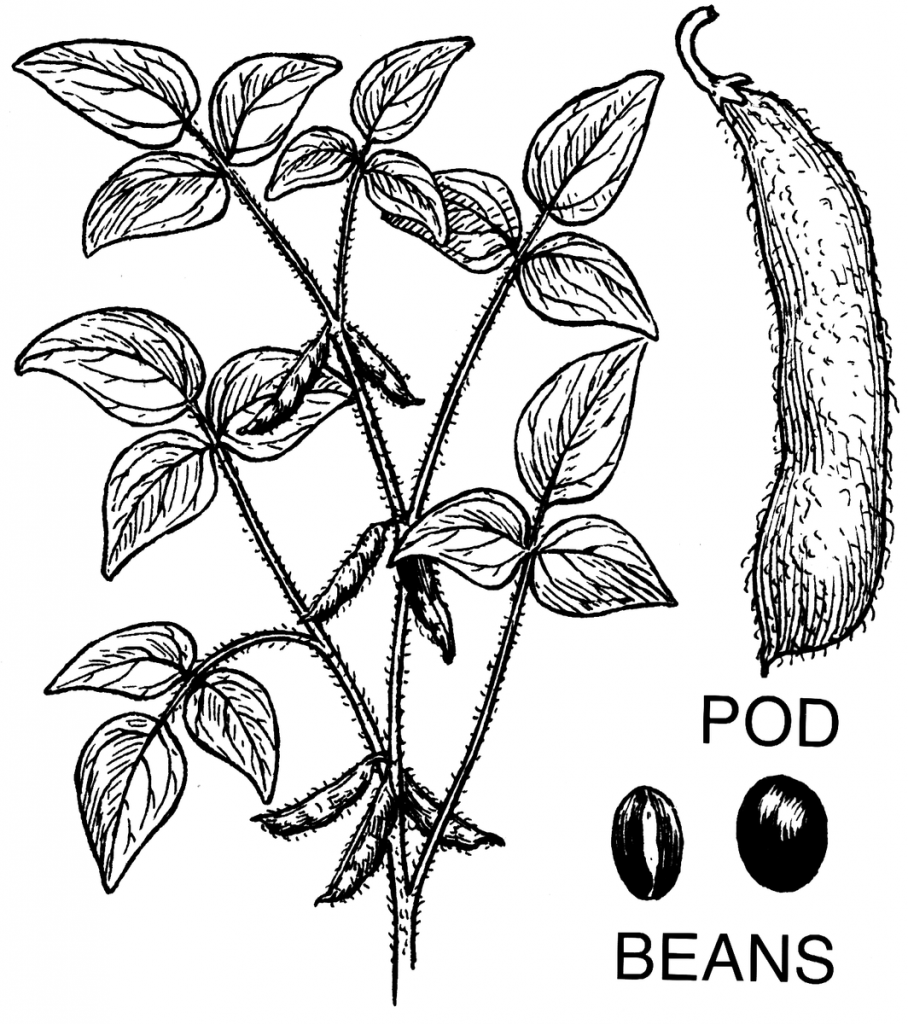 Soybean is a flowering plant (angiosperm) and is a dicot (eudicot) , in the Fabaceae, the pea family, a large and economically important family containing species that are used for food, medicine and lumber plus many species that are important ecologically. The cultivated species is derived from a wild ancestor, Glycine soja, which grows wild in Japan, Korea, China and Russia.

Soybean is an annual herbaceous species that typically grows to roughly one meter in height and may be branched or not depending on the cultivar and planting density. Leaves are compound and generally trifoliate. Small flowers are produced on short branch shoots growing from the axial buds at the base of leaves. Flowers are self fertile and develop into pods (the official fruit name is legume) that are typically less than 10 cm long and contain 2-3 seeds.

It is a typical flowering plant with bisexual flowers that produce male gametophytes (pollen) and female gametophytes located in ovules present at the base of the flower, the ovary. The flowers are self fertile; pollen from a flower can be transferred to the stigma of the same flower and it will germinate, grow to the ovule, and fertilize the egg produced by the female gametophyte. Since meiosis does occur in the production of both gametophytes some variability results from the sexual process but much less than would occur if flowers were fertilized by pollen from different plants.

Soybean is a photosynthetic autotroph which uses the C 3 photosynthetic pathway, producing sucrose that can be used as an energy source in cellular respiration or as a material source, providing carbohydrates. Like many members of the pea family, soybean often houses Rhizobium bacteria in nodules (galls) on its roots. The Rhizobium bacteria provide a source of nitrogen to the plant, but they also represent a sizable drain on photosynthate because substantial amounts are ne eded to ‘feed’ the bacteria, mostly to provide energy for the nitrogen fixation process. Whether or not the soybean benefits (grows more) from its interaction with Rhizobium depends on the amount of available nitrogen in the soil. But symbiotic nitrogen fixation by Rhizobium lessens the nitrogen fertilizer needs for growing soybeans and also enriches the soil with nitrogen for subsequent crops.

Soybean is a short-day plant, although the specific requirements vary with cultivar. One of the reasons soybean is not grown near the equator is because the daylength is never sufficiently short to trigger flowering. In addition to the interaction with Rhizobium, soybean has significant interactions with a large group of pathogens and herbivores: nematodes, water molds (Phytophthora), rust diseases, a variety of bacterial diseases, and a large number of insect herbivores, most of which attack other crops as well.

Other edible members of the pea family: beans and others

Like the grass family, the pea family (Fabaceae) is the source of a variety of edible crops. These are generally divided into ‘pulse’ crops where the seeds (often called beans) are harvested dry, and green vegetable crops that are harvested and eaten before drying. Some, like soybean and green beans may be harvested both ways.

All of the seeds of the Fabaceae family contain secondary chemicals that can have toxic effects on humans, although most of the widely cultivated plants are generally not toxic to most people. Red kidney beans and lima beans should be thoroughly cooked before eating and fava beans are toxic (‘favism’) to individuals lacking a specific enzyme. Wild members of the pea family are commonly toxic and include ‘locoweeds’, rosary pea, some species of Lathyrus. Note that not all things called  ‘beans’ come from members of the Fabaceae, e.g. castor bean, cocoa bean, vanilla bean, coffee bean.