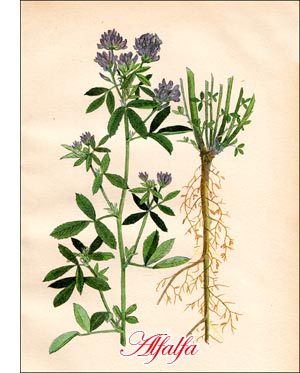 Alfalfa (Medicago sativa), is an important perennial herbaceous crop. Most people are familiar with annual crops (planted in the spring and harvested in the fall), and with woody perennial crops (grapes, apples, cherries) but there also are perennial crops that are non-woody. While a few produce food for humans (sugar cane, asparagus, rhubarb, groundnuts) most herbaceous perennial crops are ‘forage’ crops producing food (usually called ‘hay’) for domesticated animals, especially horses and cattle. While many think of hay as being annual and perennial grasses, there are a number of dicot flowering plants, including alfalfa and clover, both perennials, that are very important sources of ‘hay’. Humans do eat alfalfa plants, but only in the form of alfalfa ‘sprouts’, young germinated seeds.

Alfalfa is in the pea family. It is a flowering plant (angiosperm) and is a dicot (eudicot) in one of the largest and most important plant family, the pea family, which includes numerous important crops and many ecologically important species.

Alfalfa growth produces a typical stem with alternate, trifoliate leaves and branches that originate in the axils of these leaves. However, this growth only lasts a year in most of the (temperate) habitats where the plant grows, habitats where winter cold kills most of the above ground plant. Alfalfa’s existence as a perennial depends upon what is known as a ‘crown’, which is a section of the stem close to the ground surface. This structure produces adventitious buds that provide for growth after most of the above ground portion of the plant dies in the winter. Under agricultural conditions the crown also allows the plant to re-sprout after nearly all of the above ground portion of the plant has been harvested. Harvesting often occurs up to six times over the growing season.

Alfalfa is a typical flowering plant that has bisexual flowers that require pollination in order to set seed. Flowers are ‘irregular’, meaning that they are not radial symmetrical like a rose or buttercup.  Irregular flowers are typical of the pea family. The anthers and pistil are under tension between a pair of petals that form the ‘keel’ of the flower. To effect pollination an insect must land on the keel in such a way to trigger a rapid movement of the stamens to ‘slap’ the underside of the visitor. (see the “Alfalfa Pollen Explosion” video). Honeybees are poor pollinators of alfalfa, they visit to obtain nectar but don’t trigger the movement of the stamens, perhaps because they don’t like being slapped by the anthers. If successfully pollinated, corkscrew fruits develop with small seeds.

Alfalfa originated in the Middle East, probably Iran, and has been cultivated by humans for over 2500 years to provide food for livestock. Because of human introductions it is now found world-wide, primarily in temperate habitats. It is slightly invasive and can be found on roadsides and other disturbed habitats in addition to habitats that are under cultivation. It is drought tolerant and does well on sites that are quite dry. Consequently alfalfa is grown extensively in the western US. Its root system commonly goes down three meters into the soil to acquire water and occasionally goes down 15 m (over 50 feet!!!!). Interestingly, it produces chemicals that deter the germination of its own seeds, necessitating that fields alternate from alfalfa to another crop before being reseeded in alfalfa.

Because honeybees are poor pollinators, farmers growing alfalfa for seed (as opposed to growing it for hay in which case pollination doesn’t matter) rely on other pollinators. These other pollinators need to be managed to produce generate the high pollinator population densities needed to effect pollination. 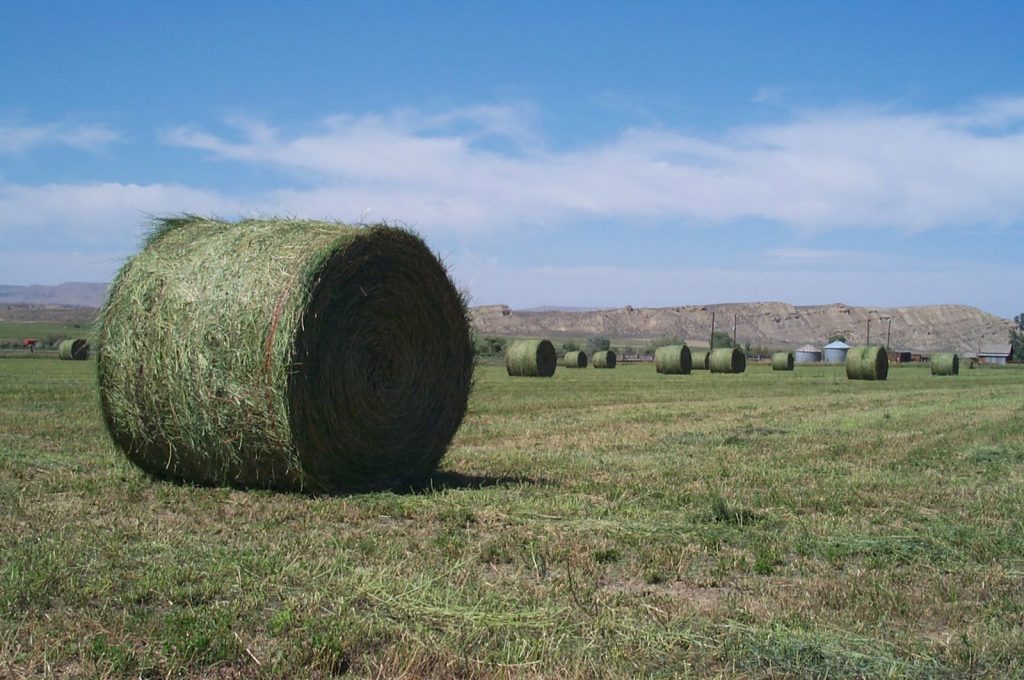