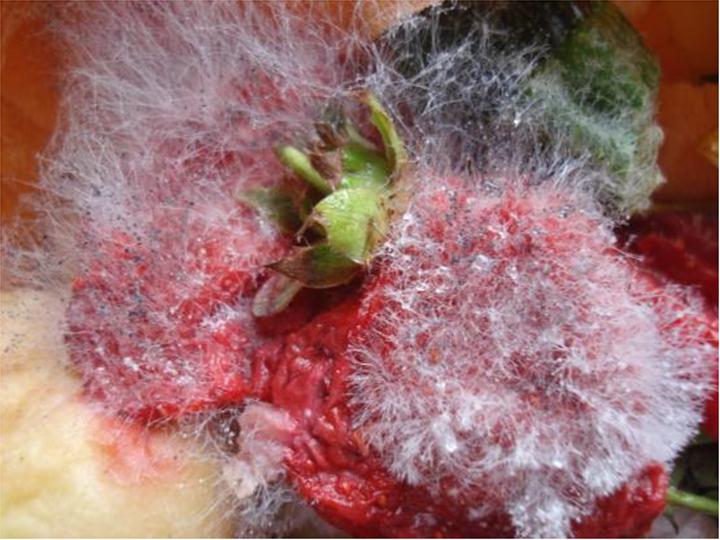 Bread Mold (Rhizopus) is one of the most frequently encountered members of the Kingdom Fungi, appearing not only on bread but on a variety of other foods (e.g. strawberries, peaches) if not eaten soon enough.

The genus Rhizopus has the same common name, bread mold, as the entire phylum, Zygomycota, in which it is found. The Zygomycota are in the Kingdom Fungi, a group unified by two structural features, a filamentous structure and the presence of cell walls formed of the polysaccharide chitin.  Within the fungi, the bread molds are one of two groups (the other are the Glomeromycota) that lack of cross-walls (i.e. the filaments are  coenocytic) and have a distinctive sexual cycle, see below. Molecular evidence supports both the Kingdom Fungi and the Zygomycota phylum, i.e. both are thought to be a good phylogenetic entities.

Like most fungi, Rhizopus consists of filaments (hyphae) that branch to form a feeding structure, a mycelium. All the bread molds, including Rhizopus, are coenocytic, that is, the filaments contain multiple (haploid) nuclei that are not partitioned into individual compartments (cells). The hyphae grow from the tip, extending the filaments, and more nuclei are produced as they grow. 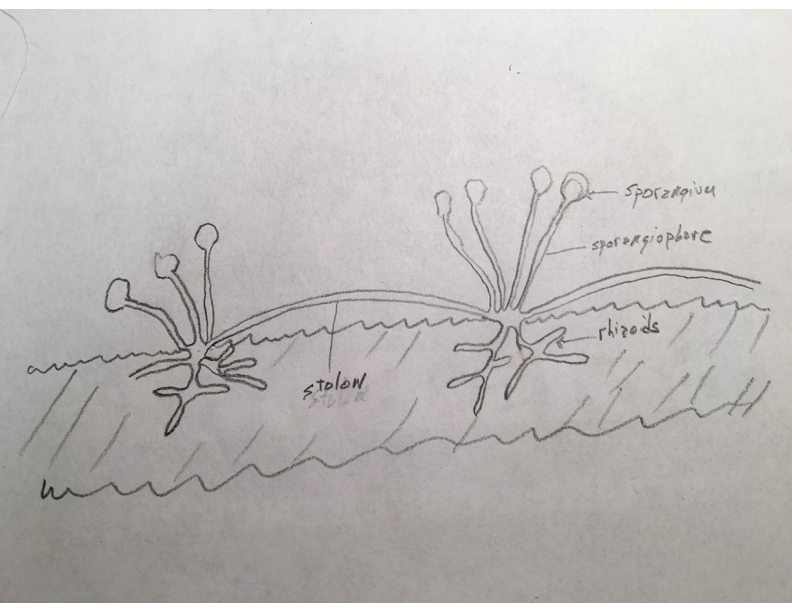 Initially the Rhizopus mycelium  ‘mines’ its substrate, acquiring food from whatever it is  growing on. Later it produces three distinct structures, all coenocytic: (1) vertically oriented sporangiophores that bear at their tip a round structure that produce numerous asexual spores, (2) root-like ‘rhizoids’ located below the sporangiophores. They are imbedded in the substrate and allow the sporangiophores to grow upward (3) horizontally running ‘stolons’ that spread the fungus laterally and produce sporangiophores and rhizoids where they attach to the substrate. Only within the the spore producing structure are cell walls formed around individual nuclei, forming uninucleate cells which develop into spores and are dispersed. 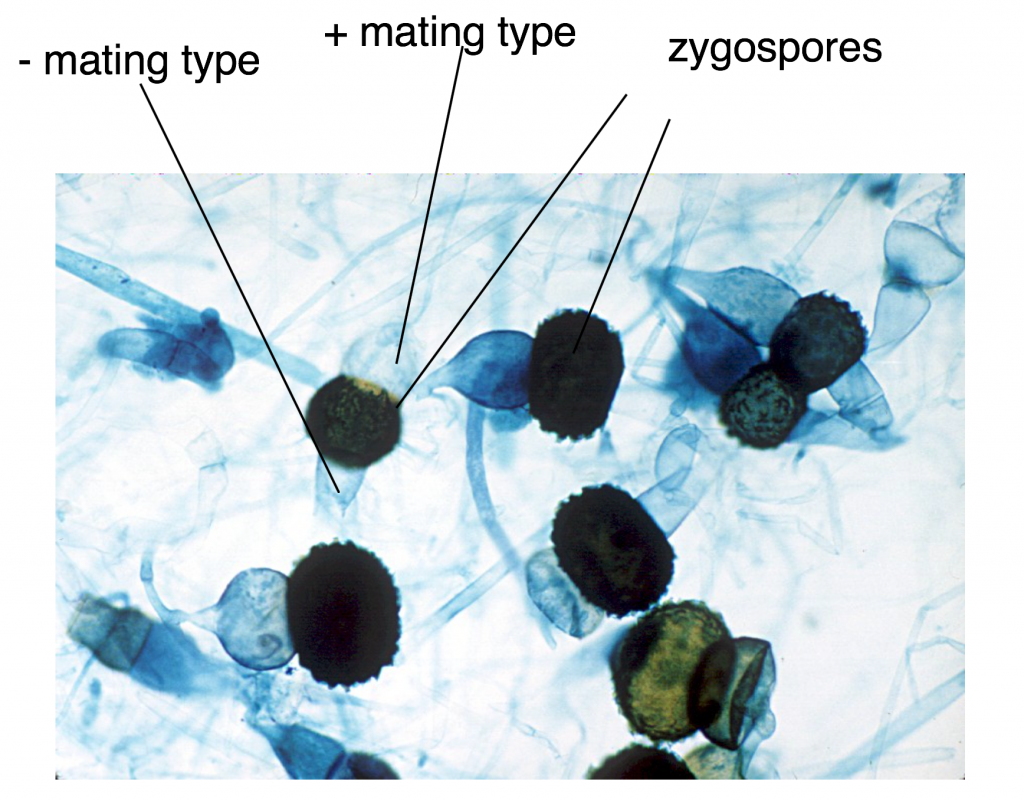 Rhizopus reproduces asexually by producing sporangia at the end of sporangiophores. Sporangia open to  release numerous spores. Occasionally hyphae of two different mating types (‘+’ and ‘-’) encounter each other and, under appropriate conditions, will induce each other to grow together to effect sexual reproduction. The hyphae meet and fuse; cross walls are formed on each side of the junction, creating a cell that contains haploid nuclei from each of the mating types. Pairs of nuclei, one from each mating type, are formed and fuse to form multiple diploid nuclei. All this occurs as the cell containing the now diploid nuclei develops into a zygospore with a thick cell wall with projections extending outward. The zygospore typically becomes dormant and the hyphae connected to it die. The zygospore can be dispersed by wind or water before any growth occurs. When it germinates a single filament emerges, forming a sporangiophore with a spore producing sporangium at its end. As this develops, the diploid nuclei undergo meiosis, creating haploid nuclei, each of which develop cell walls and forming spores that are subsequently dispersed when the sporangium splits open at the end of its development.

Rhizopus is a heterotroph, like humans, but it digests food outside of the organism, not inside, as is the case for most familiar animals. Both fungi and humans secrete enzymes to break down food but humans secrete the enzymes inside a tube running through their body, while fungi secrete enzymes into the environment that they live in.  After food has been broken down it can be absorbed by the heterotroph and utilized either materially, to form biomolecules to increase the size of the heterotroph, or energetically, being oxidized in cellular respiration to provide energy sources (ATP and others). 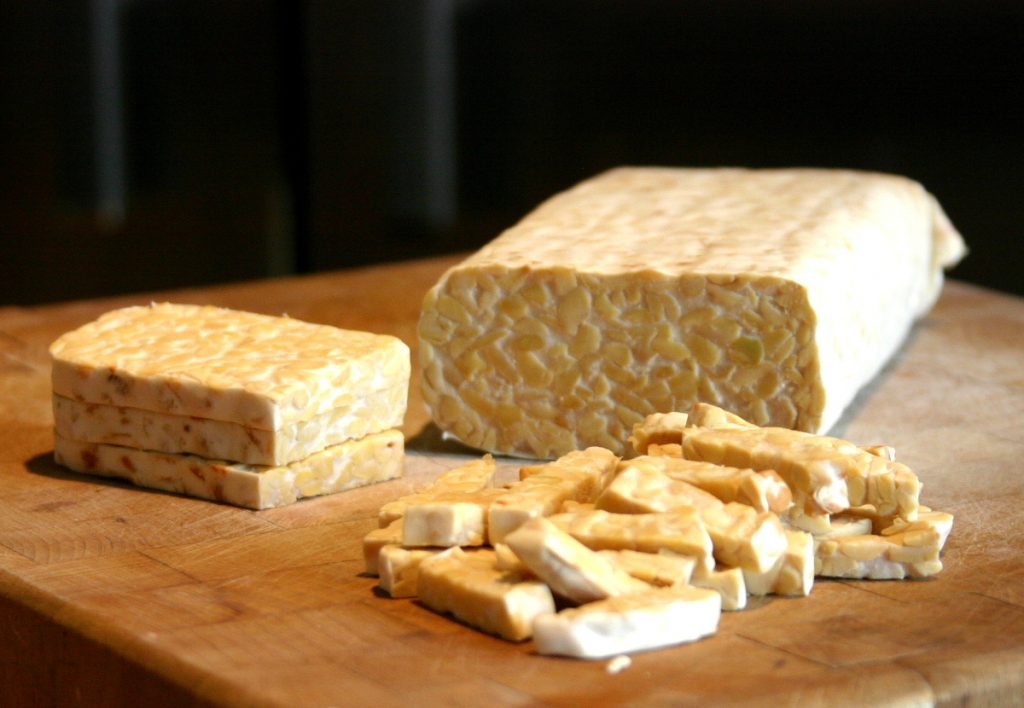 Bread molds like Rhizopus are very important heterotrophs who collectively eat a great deal of organic material, thereby releasing nutrients that autotrophs can use. But they also destroy substantial quantities of stored food.  Occasionally bread molds, including some forms of Rhizopus, can cause diseases of both plants and animals. Because Rhizopus is relatively easy to culture, it is used industrially to carry out some important chemical conversions, e.g. the conversion of plant steroids into specific chemicals like cortisone and the production of fumaric acid from sugar. Rhizopus is also used to produce tempeh, a soybean ‘curd’ food consisting of crushed soybeans partially decomposed by Rhizopus and held together by fungal hyphae.