Trembling Aspen (Populus tremuloides) is the most widely distributed tree in North America, occurring from the east coast to the west coast and from Alaska to Mexico. The genus Populus, which includes several other aspen species and also cottonwoods, has a world wide distribution in the northern hemisphere. While cottonwoods, like P. deltoides and P. fremontii are typically found along streams and rivers, aspens like P. tremuloides and P. grandidentata are found in a variety of upland habitats, often forming monotypic stands because they grow clonally (see below). 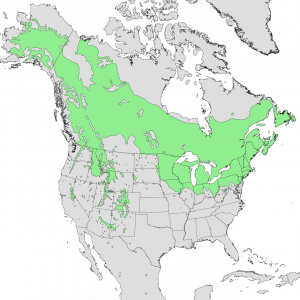 Populus is a genus of flowering plants in the willow family with around 25 species, many of which are familiar and are commonly seen. The willow family is a taxonomic grouping that used to be small (three genera), but recent studies using molecular information have enlarged the family greatly (56 genera) by merging it with several other families. Although the group was once thought to be primitive, based on floral characteristics, including the fact that most are wind-pollinated, most plant taxonomists now consider the family to be of relatively recent origin. 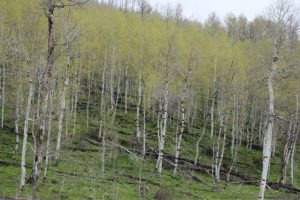 Most members of this genus are fast-growing and relatively short-lived trees. They exhibit typical tree-like above-ground form but are relatively unusual because of their below-ground behavior, producing underground stems (rhizomes) that spread horizontally below ground and sporadically produce vertical shoots that form new trees. As a consequence, several members of the genus (especially aspens) are typically found as clones, stands of genetically identical individuals all connected (or previously connected) by below-ground structures. Some other trees that behave similarly are black locust and beech. This kind of growth pattern with spreading below ground stems is also found in shrubs (e.g., creosote bush of the M ojave desert) and herbaceous (non-woody) plants (e.g., goldenrod, Kentucky bluegrass, a common lawn grass).

Although individual aspen trees (above ground stems) are relatively short lived (typically less than 200 years) aspens clones represent some of the longest-lived organisms. One of the best-studied clones lives in Utah and has been named ‘Pando’. It is estimated to weigh over six million kilograms, extend over 43 hectares, and may have an age of 80,000 years (see link below).

As described above, aspens ‘reproduce’ asexually by spreading below ground, although one could argue that this isn’t reproduction at all, it is simply organismal growth. Aspen is also capable of the sexual reproduction typical of angiosperms, producing mobile male gametophytes (pollen) which are dispersed to the location of the female gametophytes (the ovules of flowers). The gametes that are subsequently produced unite to form a zygote that grows and is packaged into a seed. One relatively unusual feature for Populus, compared to most flowering plants, is that individual trees and (therefore) clones are unisexual; the flowers are unisexual and any one tree/clone produces only one kind of flower, either male or female. Both the male and female flowers occur in catkins, drooping clusters of flowers that lack obvious petals. Cottonwoods (P. deltoides) in particular but all members of the genus are known for producing copious quantities of seeds, each packaged in a cottony tuft of hairs.

Aspens are typical photosynthetic autotrophs. Individual plants accumulate carbon dioxide from the atmosphere and use it to form carbohydrates that are both used to enlarge the plant (i.e., grow) and also to be ‘burned’ in cellular respiration to provide energy for the plant. Aspens are typical seed plants, requiring 17 elements: carbon, hydrogen and oxygen (obtained as carbon dioxide and water) , plus an additional 14 ‘minerals’ that are obtained from the soil solution by the root system.

Because it is a common, wide-ranging genus there is a multitude of interactions that aspens exhibit. Among them are the following:

In parts of its range aspen depends upon fire to eliminate competitors. Conifers (e.g., spruce and fir) do not grow as fast as aspens but can grow taller and can eventually outcompete aspens by shading them out, killing trees and root sprouts. Fire can kill conifer competitors while only eliminating the above-ground part of aspens. Thus, fire allows aspens, sprouting from underground stems, to quickly re-colonize the area. In western North America, avalanches may serve as a different form of disturbance that eliminates aspen competitors and facilitates continued aspen presence.

Beaver are herbivores that feed primarily on tree bark and shoots. They are particularly fond of aspen and some of its relatives. As a consequence, beaver can have a very substantial influence on forest composition, drastically decreasing the occurrence of aspen and increasing the frequency of species less desirable to beaver. Because beaver can significantly affect communities by building dams and flooding areas, the preference for aspen can influence what areas get flooded as a result of beaver activity.