Sagebrush (Artemisia  tridentata) dominates large portions of western U.S.,  regions that are too dry to support forests or grasslands. Similar areas are found in several other parts of the world (central Asia, southern South America, southern Africa) and are sometimes described as a ‘shrub-steppe’ community. Many of these areas are also described as ‘cold deserts’ with low rainfall and cold winters. Interestingly, although these areas do not support trees, smaller woody plants with multiple branches (i.e. shrubs) are successful.

Artemisia is a large genus in the sunflower family (Asteraceae) of the angiosperm (flowering plant) group. There are 200-400 species depending upon how much a worker decides to ‘lump’ groups together. Many members of the genus are herbaceous, including several cultivated species: A. drucunculus is the source of the spice tarragon; A. absinthium (aka wormwood) is used to flavor some wines and to produce the liquor absinthe; A. stelleriana (‘dusty miller’) is a common ornamental plant; A. vulgare (mugwort), is a common weed. All members of the genus produce chemicals that are aromatic (in an olfactory sense), hence their use as flavorings. Some of the chemicals produced by Artemisia have been used medicinally (either directly or after some chemical modification) to treat malaria, internal parasites and morphine addiction. The common name sagebrush comes from the superficial similarity in scent with the herb sage, an unrelated species. The common name sagebrush is applied to a group of roughly twenty species of shrubs found in the western U.S. 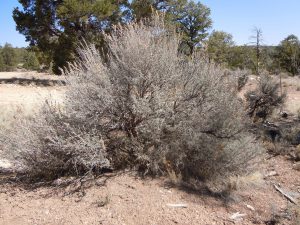 Shrubs are woody plants that have extensive branching and do not grow particularly tall. Sagebrush is rarely over two m tall and, although it often has a main stem, it branches extensively and may send up multiple stems from its base. Because they rarely have taller plants around them, shading is not a problem and their spreading habit allows them to intercept more sunlight. Although woody, they have an unusual pattern of secondary growth where the vascular cambium often does not form a complete ring around the stem/branch, producing branches that are not round in cross section. Sagebrush leaves are evergreen, roughly five cm in length, have three ‘teeth’ at the end and have a whitish ‘bloom’, the result of many small hairs. The physical structure of sagebrush is important to a wide variety of other species in providing an improved thermal environment both in the summer through shading, and in the winter by reducing wind speed and convective heat cooling. Sagebrush roots often penetrate several meters into the soil to obtain water. They also produce a root system closer to the soil surface (less than a meter) and studies have shown that at night sagebrush carries out ‘hydraulic lift’, moving water that actually ends up moistening surface layers of the soil and providing water to both sagebrush and potentially to other plants. 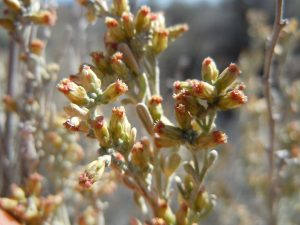 Sagebrush is a typical angiosperm, producing spores in flowers that develop male gametophytes (pollen) that are generally dispersed to other flowers where they complete their development by growing to the location (an ovule) of the female gametophyte (embryo sac) that has developed from a haploid spore. Members of the Asteraceae have ‘flowers’ that are actually inflorescences. Many familiar members of the Asteraceae (asters, sunflowers) have two types of flowers in the inflorescence: ray flowers (‘petals’) and disk flowers. Other members of the family (e.g. dandelion) have only ray flowers. Sagebrush represents a third type of Asteraceae inflorescence, one that has only disc flowers. Sagebrush is also able to reproduce asexually by sprouting from underground rhizomes.

Sagebrush is often a dominant species in the areas where it grows and is an extremely important species to these communities, providing food for animals including: numerous insects, pronghorn antelope, rodents, and birds (e.g. sage grouse). The plant is not desirable for ranchers because cattle avoid the bitter foliage and considerable effort has been taken to remove sagebrush and replace it with more palatable species. But efforts are underway to preserve sagebrush and the unique habitat it is associated with, known as ‘the sagebrush sea’.

sagebrush from the Forest Service site