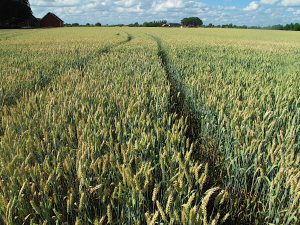 Wheat should be familiar to everyone although perhaps only as a food and not very much as an organism. Wheat is one of the oldest crop species, originating in Turkey probably close to 10,000 years ago, although some researchers place its origin even older.  As described below what we call ‘wheat’ is at least three different entities, differing in chromosome number, evolutionary history and also features related to harvesting and baking.

Wheat is a flowering plant. Multicellular, terrestrial, photosynthetic organisms (“land plants”) are generally put in the Plant Kingdom. The most important group within this kingdom, based on a number of different measures (number of species, economic importance, ecological importance) is a group that produces flowers, (flowering plants = angiosperms = the phylum Magnoliophyta). Within the angiosperms there are two main groups, monocots and dicots (now called eudicots).  Wheat is in the monocot grouping, generally considered at the class level (Liliopsida), although modern treatments recognize the group but may not assign it a particular rank. In contrast to the dicots, monocots are considered monophyletic (originating from a single ancestor) and therefore a sound taxonomic entity. In contrast, the old dicot group is not considered monophyletic.  This is why the grouping ‘eudicot’ came into being, it contains just those dicots (almost all of them) that are united by being monophyletic.  Wheat is in the Poaceae, the grass family, one of the four most important families of flowering plants and the family that includes all our important ‘cereal grains’ (wheat, rice, corn, barley, oats). There are several different species called ‘wheat’ and these are related by polyploidy: one is diploid (eikorn wheat), two are tetraploid (emmer and durum wheat) and one is hexaploid (bread wheat) . 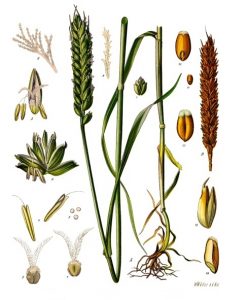 Wheat is a fairly typical ‘herbaceous’ (i.e. non-woody) plant. Like almost all organisms that are considered plants, wheat consists of cylindrical structures, shoots and roots. Both these structures have an embryonic region (apical meristem) at their tip that produces cells whose expansion elongates the cylinder. The shoot apical meristem also produces organs (leaves) that are typically broad and thin. The cellular organization of both roots and shoots shows a radial organization (i.e. a pattern from the inside to the outside) but the cells show few changes as you move up or down a root or shoot, except in the region close to the root or shoot tip where the cells are younger and have yet to develop some features. Given the proper stimulus, at least some of the shoots will develop into clusters of flowers (inflorescences) that will develop into fruits containing seeds. Grasses only exhibit primary growth, the growth resulting from the embryonic regions at the tips of roots and shoots, including branch shoots and branch roots. There is no secondary growth, growth that makes the roots and shoots of some plants wider and woody. Like most grasses, the wheat apical meristem does not elongate until the time of flowering and most leaves that the stem produces elongate before the main stem, producing what appears to be a stem but is actually a series of cylindrical leaf bases extending from the still unelongated stem.

Wheat reproduces sexually in a manner typical of flowering plants. Seeds develop from the fertilized ovules present in the ovaries of flowers. All grasses produce flowers that have a single ovule per ovary and this develops into a one-seeded fruit with the fruit wall fused to the seed coat. A wheat seed consists of three parts: the embryo, stored food (endosperm) and a seed coat fused with with the fruit wall. These components are important to human nutrition. White flour is produced after milling the grains to remove: (1) the embryo, which is sold separately as wheat germ, (2) the seed coat / fruit coat, which is sold separately as wheat bran. The remaining endosperm is primarily starch but does contain roughly 10% protein, including two proteins that combine to form gluten as flour and water mixtures (dough) are massaged (i.e. kneaded). The germ represents only a small part of the fruit but it contains substantial amounts of protein, fats, minerals and vitamins. The bran is largely indigestible fiber but it does contain some protein and fat. This is what makes whole-wheat flour ‘more nutritious’, i.e. more protein, minerals, vitamins and fat than white flour. Unfortunately, ‘more nutritious’ also applies to fungi and bacteria; and whole wheat flour is considerably more likely to spoil than white flour, which is part of the reason white flour became favored. Other reasons were white flour’s improved baking qualities and the ideal of ‘purity’. 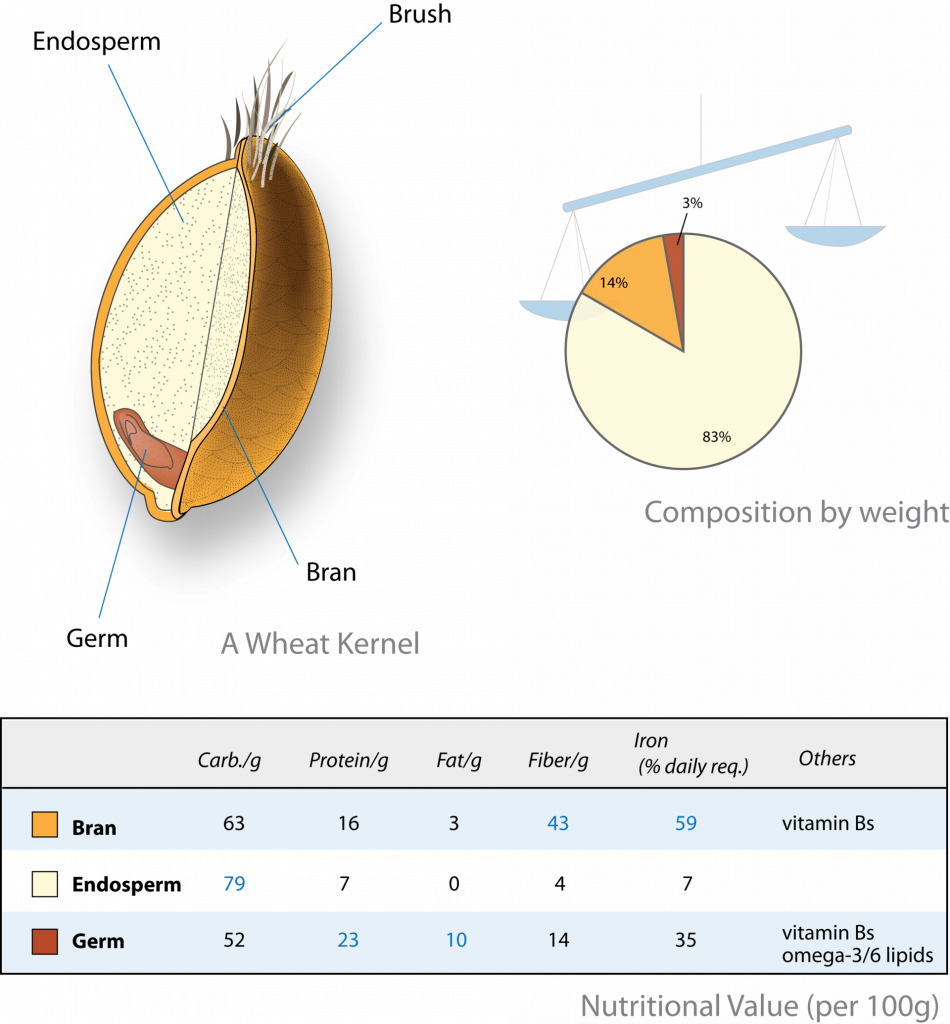 Wheat is a typical photosynthetic autotroph. Individual plants accumulate carbon dioxide from the atmosphere and use it to form carbohydrates that are both used to enlarge the plant (i.e. grow) and also to be ‘burned’ in cellular respiration to provide energy for the plant. Wheat is typical of seed plants, requiring 17 elements, carbon, hydrogen and oxygen (acquired as water and carbon dioxide), plus an additional 14 ‘minerals’ that are obtained from the soil solution by the root system.

The most significant interactions of wheat are with humans who actively foster its growth by planting it and culturing it. Like many crop species (but not like most plants) it is an ‘annual’ species: it has a finite lifetime that is less than a year, resulting from the fact that the shoot apical meristem is converted into a flowering meristem within a year of planting. Once the conversion to a flowering meristem occurs, no further growth of the shoot is possible. Moreover, as flowers and fruits develop, the nutrients in the existing plant structure, especially leaves, are mobilized and delivered to the developing seeds, providing them with nutrients but eliminating the ability of leaves to photosynthesize. Wheat can be harvested in as little as 100 days after planting, and can be planted in late spring and harvested in late summer (‘spring wheat’) or can be planted in the fall and harvested in the late spring or summer (‘winter wheat’). The inter wheat varieties need a cold treatment (‘vernalization treatment’) to induce flowering.