Halobacterium is one of several organisms that can color high salt environments red, e.g., the hypersaline pools in Owens Lake, California. Halobacterium is significant not just for its tolerance of extreme salinity but also because it is a member of the Archaea and because it has some peculiar metabolic abilities.

Halobacterium is an oxymoron, because it is not a bacterium, it is an archaeon, a member of the Archaea, a group of prokaryotes that in 1977 was distinguished from the rest of prokaryotes (organisms lacking cellular organelles) by virtue of a suite of characteristics, in particular the sequence of bases in the 16s ribosome (actually the sequences of bases in DNA that codes for the RNA of the 16s ribosome). Thus most workers now describe two groups of prokaryotes, Archaea and Eubacteria. Although initially thought to be representative of the most ancient forms of life (hence the name Archaea) workers now believe that the Archaea were derived from Eubacteria. Based on metabolic pathways and genes, it appears that and that eukaryotes and Archaea are more closely related than eukaryotes and Eubacteria. 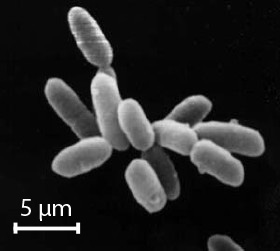 Cells are rod-shaped and roughly 2-5 um in length with a single lipid bilayer membrane surrounded by a glycoprotein cell wall. Archaea cell membranes are made of phospholipids that are distinct from those found in bacteria and eukaryotes. Halobacterium cells are flagellated and capable of moving towards a source of light, especially light in the in the yellow-green, around 560 nm, which is where its photosynthetic pigment (bacteriorhodopsin, see below) has peak absorbance.

Like all prokaryotes, Halobacteria are not sexual but they are capable of exchanging genetic material by other means. They reproduce by cell division but, like all Archaeons do not produce endospores.

Halobacteria are photoheterotrophs. Like other heterotrophs they need to eat (i.e. assimilate) organic compounds to provide themselves with material to grow, but  they also use light energy to generate ATP. In contrast, photosynthetic organisms are autotrophic: they make food (carbohydrates) and then ‘eat’ some of it to make ATP and use the rest as building material. Regular heterotrophs ‘eat’both  to acquire material for growth and  to obtain energy, usually via cellular respiration. . If Halobacteria are deprived of light they need to eat more because they will behave like a ‘normal’ heterotroph, using the food they eat both to make themselves bigger and also to provide for their energetic needs.

The pigment that interacts with light is bacteriorhodopsin, a form of rhodopsin, the same pigment that our eyes use to see. In both instances light causes a conformational change in the protein. In our eyes this causes a nerve impulse to be transmitted; in Halobacterium it causes protons to accumulate on one side of a membrane, and proton flow down the gradient that has been created allows ATP to be synthesized. Halobacterium also possesses a second protein pigment, halorhodopsin, that can use light energy to pump chloride ions into the cell, increasing the solute concentration and preventing excessive water loss.

Halobacterium is a classic example of an ‘extremophile’, an organism that exists under extreme conditions, such as high temperature, high salinity, high acidity. Halobacterium can live, and indeed requires, salt concentrations far exceeding the tolerance levels of most other organisms. They can even survive in saturated brine solutions. Because of this, they can actually be ‘fossilized’ in salt deposits and stay alive for thousands, perhaps millions of years. Tolerance of extreme conditions probably means reduced competition in such habitats.

Although many archaeons are extremophiles, not all are; and there certainly are extremophiles that are not archaeons (one you should be aware of is the bacterium, Thermus aquaticus). Another non-archaeon that lives in high salt conditions is the unicellular green algae Dunaliella salina which can produce large quantities of the pigment beta-carotene and at one time was once thought to be the source of red coloration in hypersaline lakes. Most workers now believe that archaeons like Halobacterium are what make the lakes red, but that Dunaliella may be responsible in making flamingos pink, a result of their consumption of brine shrimp that have feasted on the beta-carotene loaded Dunaliella.