Acetabularia is a member of a very diverse group, the green algae. Other members of the same group that we will consider are Oedogonium, Chlamydomonas and Cladophora, all of which are quite different in form and structure.

Acetabularia has an unusual structure by being large, unicellular and possessing features that might be considered organs —‘ roots, stems and leaves’. The single cell is attached to the substrate by root-like cellular extensions. These extensions connect to an elongate stalk that ends in an umbrella-like cap which is often 1 cm or more across. The single nucleus of this remarkable organism is found at the base of the stem.  If the stalk is cut it can regenerate a new top and the top can generate a new base, although it is short-lived, presumably because it lacks a nucleus. 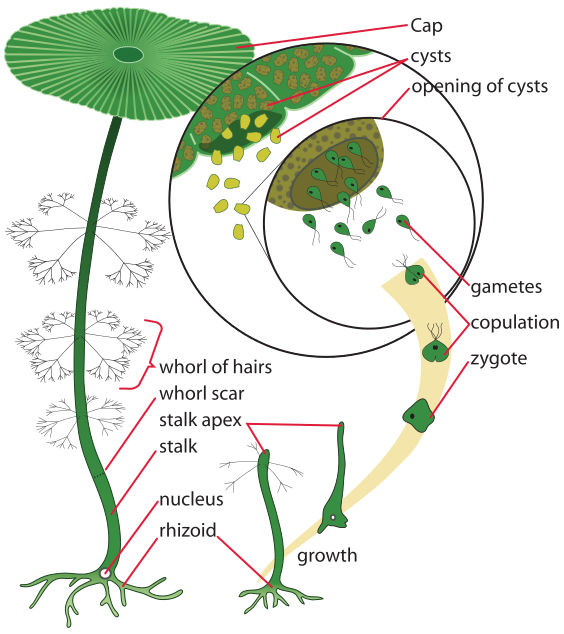 Sexual reproduction in Acetabularia is initiated when the single (diploid) nucleus goes through multiple mitotic divisions; these nuclei subsequently undergo meiosis and migrate to the cap where they are released in cysts that break open to release mobile gametes. If these gametes find gametes from another alga they fuse to form a zygote that attaches to a substrate and grows into the mature form. Asexual reproduction is also possible if mobile (diploid) zoospores are released and behave like zygotes, attaching to a substrate and developing into the mature form.

Acetabularia is a typical photoautotroph, using the energy of sunlight to synthesize carbohydrates from carbon dioxide and then using the carbohydrates as an energy source in cellular respiration and as building materials to synthesize a variety of biomolecules.  In some species the chloroplasts show an endogenous circadian movement from the cap to the rhizoids at dusk and back at dawn.  Since the organism is capable of regenerating caps if they are removed (even though it is a single cell), this movement may be adaptive by preserving resources.   In addition to acquiring the minerals elements required for life (Chapter 22) Acetabularia  is unusual in being able to take up and sequester mercury.