As far back as the early stirrings of the Cold War, the concept of a network connecting computers was under development by both government and university researchers looking for a better means to communicate and share research. The military at the time relied in part on microwave transmission technology for communications. An unexpected attack on some of these towers demonstrated how susceptible the technology was to failure of even small portions of the transmission path. This led the military to seek a method of communicating that could withstand attack. At the same time, university researchers were trying to share their work between campuses, and were struggling with similar problems when their transmissions suffered drops in signal. Parties from both groups ended up at the same conference with presentations, and decided to collaborate in order to further their work.

At the time, computers were far from what we know them as today. A single computer was a large, immobile assortment of equipment that took up an entire room. Data entry was done by using punched cards of paper, or the newest method of the time, magnetic tapes. Interacting with the computer meant reserving time on the equipment and traveling to where it was. Most machines were owned by universities, large corporations, or government organizations due to the staffing demands, size, and cost to acquire and maintain them. The image below depicts the UNIVAC 1, a system used by the United States Census Bureau and other large organizations like universities. One of the fastest machines at the time, it could perform roughly 1000 calculations per second. 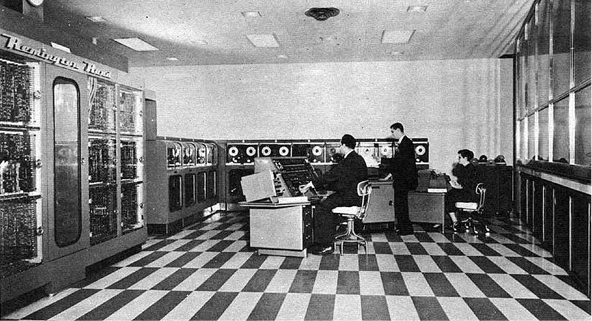 US Army, Public Domain, via Wikimedia

In comparison, the K computer, a super computer produced in 2012 by the Japanese company Fujitsu, was capable of 10 petaflops per second when it was launched. Before you reach for your dictionary or calculator, we will break that down. FLOPS stands for floating point operations per second, or in basic terms, the number of calculations the system can finish in one second. A petaflop is a numerical indicator of how many 1015 (10 with 15 zeroes after it) calculations are completed per second. So, 10 petaflops means the K computer can complete 1015 calculations ten times in one second. If we fed the UNIVAC 1 just a single petaflop of data the day it was turned on, it would still be working on the problem today. In fact, it would barely be getting started, just a mere 60+ years into a roughly 317,098-year task!

You may have heard of Moore’s Law, commonly defined as the tendency of technology’s capability to double every two years. Moore’s actual prediction was that this would apply to transistors, an element of circuits, and that it would continue for ten years after seeing its trend from 1958 to 1964. His prediction has shown to be applicable to memory capacity, speed, storage space as well as other factors and is commonly used as a bench mark for future growth.

As cold war tensions grew and Sputnik was launched, the United States Department of Defense (DoD) began to seek additional methods of transmitting information to supplement existing methods. They sought something that was decentralized, allowing better resiliency in case of attack, where damage at one point would not necessarily disrupt communication. Their network, Arpanet, connected the DoD and participating universities together for the first time. In order to standardize the way networked systems communicated, the Transfer Control Protocol/Internetwork Protocol (TCP/IP) was created. As various network systems migrated to this standard, they could then communicate with any network using the protocol. The Internet was born.

Email was soon to follow, as users of the networks were interested in the timely transmission and notification of messages. This form of messaging fit one of their initial goals. As time progressed, additional protocols were developed to address particular tasks, like FTP for file transfers and UDP for time-sensitive, error-resistant tasks.

Ongoing improvements in our ability to move more information, and move it faster, between systems progressed at a rate similar to the calculative power of the computers we saw earlier. This brings us to where we are today; able to watch full-length movies, streamed in high quality right to our phones and computers, even while riding in a car.

A Brief History of NSF and the Internet: http://www.nsf.gov/od/lpa/news/03/fsnsf_internet.htm

How the Internet Came to Be: http://www.netvalley.com/archives/mirrors/cerf-how-inet.html