He also proposes that we take as a premise that there is an actual infinity of the squares of the natural numbers.

Now, Galileo reasons, note that these two groups (today we would call them “sets”) have the same size.  We can see this because we can see that there is a one-to-one correspondence between the two groups.

Our logic is not yet strong enough to prove some valid arguments.  Consider the following argument as an example.

This argument looks valid.  By the first premise we know:  if P were true, then so would (Q v R) be true.  But then either Q or R or both would be true.  And by the second and third premises we know: Q is false and R is false.  So it cannot be that (Q v R) is true, and so it cannot be that P is true.

We can check the argument using a truth table.  Our table will be complex because one of our premise is complex.

But take a minute and try to prove this argument.  We begin with

And now we are stopped.  We cannot apply any of our rules.  Here is a valid argument that we have not made our reasoning system strong enough to prove.

There are several ways to rectify this problem and to make our reasoning system strong enough.  One of the oldest solutions is to introduce a new proof method, traditionally called “reductio ad absurdum”, which means a reduction to absurdity.  This method is also often called an “indirect proof” or “indirect derivation”.

The idea is that we assume the denial of our conclusion, and then show that a contradiction results.  A contradiction is shown when we prove some sentence Ψ, and its negation ¬Ψ.  This can be any sentence.  The point is that, given the principle of bivalence, we must have proven something false.  For if Ψ is true, then ¬Ψ is false; and if ¬Ψ is true, then Ψ is false.  We don’t need to know which is false (Ψ or ¬Ψ); it is enough to know that one of them must be.

As a concrete example, we can prove our perplexing case.

We assumed the denial of our conclusion on line 4.  The conclusion we believed was correct was ¬P, and the denial of this is ¬¬P.  In line 7, we proved R.  Technically, we are done at that point, but we would like to be kind to anyone trying to understand our proof, so we repeat line 3 so that the sentences R and ¬R are side by side, and it is very easy to see that something has gone wrong.  That is, if we have proven both R and ¬R, then we have proven something false.

A note about terminology is required here.  The word “contradiction” gets used ambiguously in most logic discussions.  It can mean a situation like we see above, where two sentences are asserted, and these sentences cannot both be true.  Or it can mean a single sentence that cannot be true.  An example of such a sentence is (P^¬P).  The truth table for this sentence is:

Thus, this kind of sentence can never be true, regardless of the meaning of P.

8.3  Our example, and other examples

We can reconstruct a version of Galileo’s argument now.  We will use the following key.

P: There are actual infinities (including the natural numbers and the square numbers).

Q: There is a one-to-one correspondence between the natural numbers and the square numbers.

S: All the square numbers are natural numbers.

T: Some of the natural numbers are not square numbers.

U: There are more natural numbers than square numbers.

With this key, the argument will be translated:

And we can prove this is a valid argument by using indirect derivation: 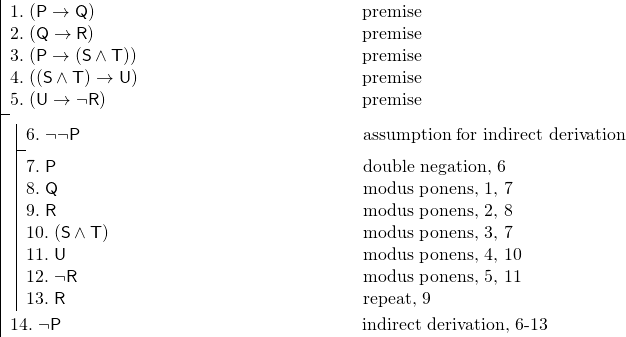 For those who are interested:  Galileo concluded that there are no actual infinities but there are potential infinities.  Thus, he reasoned, it is not the case that all the natural numbers exist (in some sense of “exist”), but it is true that you could count natural numbers forever.  Many philosophers before and after Galileo held this view; it is similar to a view held by Aristotle, who was an important logician and philosopher writing nearly two thousand years before Galileo.

Note that in an argument like this, you could reason that not the assumption for indirect derivation, but rather one of the premises was the source of the contradiction.  Today, most mathematicians believe this about Galileo’s argument.  A logician and mathematician named Georg Cantor (1845-1918), the inventor of set theory, argued that infinite sets can have proper subsets of the same size.  That is, Cantor denied premise 4 above:  even though all the square numbers are natural numbers, and not all natural numbers are square numbers, it is not the case that these two sets are of different size.  Cantor accepted however premise 2 above, and, therefore, believed that the size of the set of natural numbers and the size of the set of square numbers is the same.  Today, using Cantor’s reasoning, mathematicians and logicians study infinity, and have developed a large body of knowledge about the nature of infinity.  If this interests you, see section 17.5.

Let us consider another example to illustrate indirect derivation.  A very useful set of theorems are today called “De Morgan’s Theorems”, after the logician Augustus De Morgan (1806–1871).  We cannot state these fully until chapter 9, but we can state their equivalent in English:  DeMorgan observed that ¬(PvQ) and (¬P^¬Q) are equivalent, and also that ¬(P^Q) and (¬Pv¬Q) are equivalent.  Given this, it should be a theorem of our language that (¬(PvQ)→(¬P^¬Q)).  Let’s prove this.

To complete the conditional derivation, we must prove (¬P^¬Q).  This is a conjunction, and our rule for showing conjunctions is adjunction.  Since using this rule might be our best way to show (¬P^¬Q), we can aim to show ¬P and then show ¬Q, and then perform adjunction.  But, we obviously have very little to work with—just line 1, which is a negation.  In such a case, it is typically wise to attempt an indirect proof.  Start with an indirect proof of ¬P.

We now need to find a contradiction—any contradiction.  But there is an obvious one already.  Line 1 says that neither P nor Q is true.  But line 3 says that P is true.  We must make this contradiction explicit by finding a formula and its denial.  We can do this using addition.

To complete the proof, we will use this strategy again. 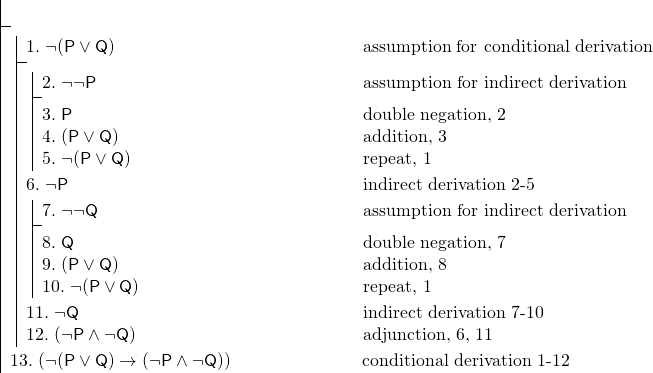 We will prove De Morgan’s theorems as problems for chapter 9.

[10] This translation of the title of Galileo’s book has become the most common, although a more literal one would have been Mathematical Discourses and Demonstrations.  Translations of the book include Drake (1974).