4.1  A problem with semantic demonstrations of validity

Given that we can test an argument for validity, it might seem that we have a fully developed system to study arguments.  However, there is a significant practical difficulty with our semantic method of checking arguments using truth tables (you may have already noted what this practical difficulty is, when you did problems 1e and 2e of chapter 3).  Consider the following argument:

Alison will go to the party.

If Alison will go to the party, then Beatrice will.

If Beatrice will go to the party, then Cathy will.

If Cathy will go to the party, then Diane will.

If Diane will go to the party, then Elizabeth will.

If Elizabeth will go to the party, then Fran will.

If Fran will go to the party, then Giada will.

If Giada will go to the party, then Hilary will.

If Hillary will go to the party, then Io will.

If Io will go to the party, then Julie will.

Julie will go to the party.

Most of us will agree that this argument is valid.  It has a rather simple form, in which one sentence is related to the previous sentence, so that we can see the conclusion follows from the premises.  Without bothering to make a translation key, we can see the argument has the following form.

For this reason, and for several others (which become evident later, when we consider more advanced logic), it is very valuable to develop a syntactic proof method.  That is, a way to check proofs not using a truth table, but rather using rules of syntax.

Here is the idea that we will pursue.  A valid argument is an argument such that, necessarily, if the premises are true, then the conclusion is true.  We will start just with our premises.  We will set aside the conclusion, only to remember it as a goal.  Then, we will aim to find a reliable way to introduce another sentence into the argument, with the special property that, if the premises are true, then this single additional sentence to the argument must also be true.  If we could find a method to do that, and if after repeated applications of this method we were able to write down our conclusion, then we would know that, necessarily, if our premises are true then the conclusion is true.

Look at this for a moment.  If we have a conditional like (P→Q) (looking at the truth table above, remember that this would meant that we let Φ be P and Ψ be Q), do we know whether any other sentence is true?  From (P→Q) alone we do not.  Even if (P→Q) is true, P could be false or Q could be false.  But what if we have some additional information?  Suppose we have as premises both (P→Q) and P.  Then, we would know that if those premises were true, Q must be true.  We have already checked this with a truth table.

The first row of the truth table is the only row where all of the premises are true; and for it, we find that Q is true.  This, of course, generalizes to any conditional.  That is, we have that:

We now capture this insight not using a truth table, but by introducing a rule.  The rule we will write out like this:

We describe this by saying that the third line is “derived” from the earlier two lines using the inference rule.

This inference rule is old.  We are, therefore, stuck with its well-established, but not very enlightening, name:  “modus ponens”.  Thus, we say, for the above example, that the third line is derived from the earlier two lines using modus ponens.

We need one more concept:  that of a proof.  Specifically, we’ll start with the most fundamental kind of proof, which is called a “direct proof”.  The idea of a direct proof is:  we write down as numbered lines the premises of our argument.  Then, after this, we can write down any line that is justified by an application of an inference rule to earlier lines in the proof.  When we write down our conclusion, we are done.

Let us make a proof of the simple argument above, which has premises (P→Q) and P, and conclusion Q.  We start by writing down the premises and numbering them.   There is a useful bit of notation that we can introduce at this point.  It is known as a “Fitch bar”, named after a logician Frederic Fitch, who developed this technique.  We will write a vertical bar to the left, with a horizontal line indicating that the premises are above the line.

It is also helpful to identify where these steps came from.  We can do that with a little explanation written out to the right.

Now, we are allowed to write down any line that follows from an earlier line using an inference rule.

And, finally, we want a reader to understand what rule we used, so we add that into our explanation, identifying the rule and the lines used.

That is a complete direct proof.

Notice a few things.  The numbering of each line, and the explanations to the right, are bookkeeping; they are not part of our argument, but rather are used to explain our argument.  However, always do them because, it is hard to understand a proof without them.  Also, note that our idea is that the inference rule can be applied to any earlier line, including lines themselves derived using inference rules.  It is not just premises to which we can apply an inference rule.  Finally, note that we have established that this argument must be valid.  From the premises, and an inference rule that preserves validity, we have arrived at the conclusion.  Necessarily, the conclusion is true, if the premises are true.

The long argument that we started the chapter with can now be given a direct proof. 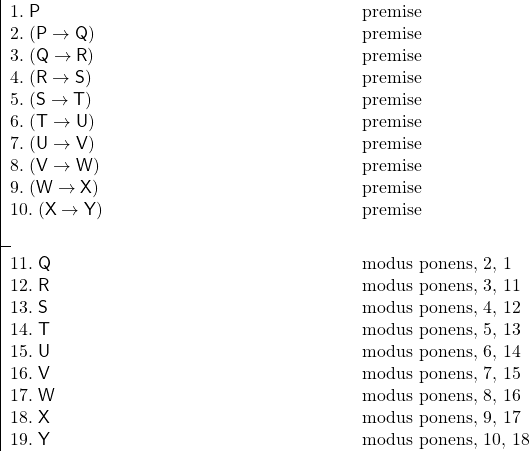 From repeated applications of modus ponens, we arrived at the conclusion.  If lines 1 through 10 are true, line 19 must be true.  The argument is valid.  And, we completed it with 19 steps, as opposed to writing out 1024 rows of a truth table.

We can see now one of the very important features of understanding the difference between syntax and semantics.  Our goal is to make the syntax of our language perfectly mirror its semantics.  By manipulating symbols, we manage to say something about the world.  This is a strange fact, one that underlies one of the deeper possibilities of language, and also, ultimately, of computers.

What we observe from this truth table is that when both (Φ→Ψ) and ¬Ψ are true, then ¬Φ is true.  Namely, this can be seen in the last row of the truth table.

This rule, like the last, is old, and has a well-established name:  “modus tollens”.  We represent it schematically with

What about negation?  If we know a sentence is false, then this fact alone does not tell us about any other sentence.  But what if we consider a negated negation sentence?  Such a sentence has the following truth table.

We can introduce a rule that takes advantage of this observation.  In fact, it is traditional to introduce two rules, and lump them together under a common name.  The rules’ name is “double negation”.  Basically, the rule says we can add or take away two negations any time.  Here are the two schemas for the two rules:

Finally, it is sometimes helpful to be able to repeat a line.  Technically, this is an unnecessary rule, but if a proof gets long, we often find it easier to understand the proof if we write a line over again later when we find we need it again.  So we introduce the rule “repeat”.

Here is an example that will make use of all three rules.  Consider the following argument:

We want to check this argument to see if it is valid.

To do a direct proof, we number the premises so that we can refer to them when using inference rules.

And, now, we apply our inference rules.  Sometimes, it can be hard to see how to complete a proof.  In the worst case, where you are uncertain of how to proceed, you can apply all the rules that you see are applicable and then, assess if you have gotten closer to the conclusion; and repeat this process.  Here in any case is a direct proof of the sought conclusion.

Developing skill at completing proofs merely requires practice.  You should strive to do as many problems as you can.

1. Complete a direct derivation (also called a “direct proof”) for each of the following arguments, showing that it is valid. You will need the rules modus ponens, modus tollens, and double negation.

2. In normal colloquial English, write your own valid argument with at least two premises. Your argument should just be a paragraph (not an ordered list of sentences or anything else that looks like logic).  Translate it into propositional logic and use a direct proof to show it is valid.

3. In normal colloquial English, write your own valid argument with at least three premises. Your argument should just be a paragraph (not an ordered list of sentences or anything else that looks like logic).  Translate it into propositional logic and use a direct proof to show it is valid.

4. Make your own key to translate into propositional logic the portions of the following argument that are in bold.  Using a direct proof, prove that the resulting argument is valid.