Kathleen Steinhauer (1932–2012) was a woman who bridged many worlds, many identities. She identified as First Nations and as Métis; while some assumed she was white. When I knew her she never wore pants, always skirts or dresses; and when she danced her traditional-style jigging in outdoor competitions, she would often wear a signature hat—daintily bobbing in time with the fiddle while her feet executed the steps with precision. She was also an activist but one who worked behind the scenes, collaborating with her more vocal friends on First Nations policy in Canada. It is important to note that after 1985 and Canada’s constitutional reforms, three umbrella groups were recognized as “Aboriginal” or Indigenous—Inuit, First Nations, and Métis. Those who had previously been recognized as Indians via treaty and the Indian Act are now known as First Nations. Métis has complex and contested meanings. It may refer to an affiliation with the Métis Nation that has a specific cultural history stemming from the Red River region of Manitoba or to a broader understanding of individuals and groups with mixed European and Indigenous ancestry. In Kathleen’s case, she is Cree (First Nations) and white through her parents, but she also identified with the Métis Nation culturally speaking.

Kathleen initially grew up on Saddle Lake reserve, a Cree First Nations reserve in eastern Alberta, Canada. She then attended a Protestant residential school, the Edmonton Indian Residential School, from age five to eight. Here she and the other children regularly received corporal punishment, especially if they spoke Cree (see Steinhauer and Carlson 2013 for more details). A more positive story from her residential school years was when Kathleen recalled in an interview I conducted with her how she and other girls would secretly dance in the basement through a warning system they developed: one girl would watch and listen near the door, another at the landing to the upstairs, and another at the top of the stairs down to the basement. These girls were not completely passive in how they survived the residential school system. Once her mother realized that the school was mistreating Kathleen and her sisters, she began to homeschool them. Other First Nations and Métis children did not have this luxury, but she had some leeway, since her mother was white and adamant about the conditions there (Steinhauer and Carlson 2013, 16).

Kathleen continued her schooling by training as a nurse. After she had been a nurse for a number of years, she married her second husband in 1965. With this marriage, she lost her treaty rights because her husband was a “non-status Indian.” She, along with many other First Nations women (over five thousand), were involuntarily “enfranchised” once they married someone who was not registered as an official member of an “Indian band” (Leddy 2016). Canada’s enfranchisement policies promoted assimilation and Canadian citizenship. For example, before 1960, “enfranchised Indians” could vote in federal elections while those who retained their “Indian status” could not (Leslie 2016). In reality, these enfranchisement policies meant disenfranchisement or a loss of Indigenous rights. Those who were “enfranchised” were not allowed to live on the reserve, inherit reserve property, vote in reserve matters, or have access to health or education benefits recognized by treaty (Goyette 2013, xxxiii).

These enfranchisement policies also affected women differently than men. When men married women who were non-Indigenous or “non-status,” their wives then gained access to these Indigenous rights. As Kathleen would remind me, her own white mother had gained access to these rights upon marrying her father, while she was denied them for marrying someone legally “non-status.” The ideology behind these policies was that since women were the dependents, once they married someone non-Indigenous, they no longer needed to depend on the benefits granted by treaty to Indigenous people.

In protest of Canada’s unequal treatment of Indigenous women, Kathleen joined forces in the late 1960s with other women activists from Saddle Lake living in Edmonton—Nellie Carlson, who had also been at the same residential school as Kathleen—Jenny Margetts, as well as more well-known activists from the east, Mary Two-Axe Early, Jeannette Corbiere Lavell, and Sandra Lovelace Nicholas. They eventually formed what became the national Indian Rights for Indian Women organization, which sought to overturn the inherently sexist and colonial ideology running through Canada’s policies toward women. They met with politicians, protested at rallies, wrote letters to newspapers, and became legal experts through their many court battles with the Canadian state. They also suffered backlash from the government, the press, from groups like the National Indian Brotherhood (what became the Assembly of First Nations), and even from relatives in their families.

After years protesting their unfair loss of rights, these women finally saw some justice in 1985 when Canada amended these exclusionary policies with what is called Bill C-31. This bill reinstated women and their children’s membership. However, for Kathleen, the struggle did not end here because Canada’s Indian Affairs reinstated her to her first husband’s band. It was not until 1999, thirty-nine years after she had lost her rights and after years of working with lawyers and another court case that Kathleen was reinstated to the Saddle Lake Cree Nation to which she belonged at birth (Steinhauer and Carlson 2013, 100–108).

As one of her granddaughters, Jessie Loyer, recalled in reflecting on Kathleen’s legacy, “Activism was always at the heart of what she did. . . . She cared so strongly about justice that she worked tirelessly.” Kathleen died in March of 2012, and Jessie thought that she would have appreciated the Idle No More movement that arose later that year in protest of the federal government’s disregard for the environment and Indigenous sovereignty. It saddened Jessie that she could not speak to her grandmother directly about Idle No More nor take her to its rallies. Idle No More was founded by women, and while Kathleen was not a part of its emergence, she and the other activist women in the 1960s, 1970s, and 1980s laid the groundwork for these twenty-first-century Indigenous activists.

I would like to thank Kathleen Steinhauer’s family, especially her daughter Celina Loyer and her granddaughter Jessie Loyer. 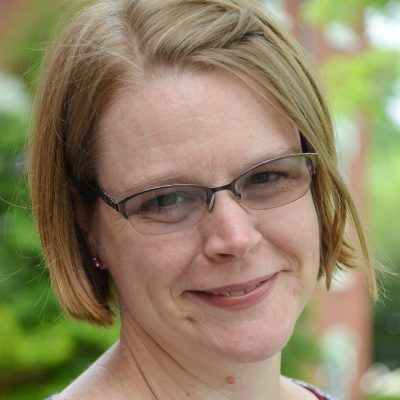 Sarah Quick is an associate professor of anthropology at Cottey College in Missouri, where she teaches cultural anthropology courses, qualitative research methods, interdisciplinary courses overlapping with environmental studies, and Cottey’s first semester writing course. Dr. Quick is trained in sociocultural anthropology and ethnomusicology, and it was through her doctoral field research on Indigenous fiddle dance performance in Western Canada that she met Kathleen Steinhauer. Her research interests span from contemporary Indigenous music and dance performance to farm-oriented youth groups and food movements.

Gendered Lives by Sarah Quick is licensed under a Creative Commons Attribution 4.0 International License, except where otherwise noted.