When Jasmeen Patheja was an undergraduate student in the southern Indian city of Bengaluru (formerly Bangalore) in 2002, she began taking public transport frequently. As she rode buses, took auto-rickshaws, and walked along city streets, she found herself subjected to the range of acts that constitute street sexual harassment and assault: groping, winking, pinching, lewd comments, and men pushing up against her in public. In South Asia, street sexual harassment is often dismissed with the use of the colloquial term “eve teasing” to describe it. As “teasing,” it becomes seen as a form of harmless banter, even play, something that can be brushed aside and not taken seriously.

Patheja began asking her friends and classmates if they also experienced such harassment—and they did. The challenge was in bringing people to recognize that what they considered to be routine behavior was in fact harassment; it was so normalized as an aspect of everyday life that women came to expect it every time they stepped out of their homes. She created Blank Noise in 2003 as a community arts project to respond to such harassment through street interventions and public actions. “Blank” references the feeling of numbness and disbelief felt after being harassed; “Noise” indexes the simultaneous eruption of confusion, anger, hurt, and pain—a cacophony of mixed signals.

Since 2003, Blank Noise has invited volunteers to join a range of innovative and hard-hitting public actions and digital interventions. Initially these were oriented toward raising public awareness about street sexual harassment as a criminal offense (punishable by Indian law) and thus a serious infraction. For example, in one street action, volunteers—mostly young women—appeared at a busy intersection when the streetlights turned red. They walked across the zebra crossing to face the sea of commuters waiting for their light to turn; on their T-shirts were pasted one letter of the phrase “Y R U LOOKING AT ME?” In another, volunteers fanned out on the railings of a bustling thoroughfare where many of them had been groped and harassed in the past. During the intervention, however, they occupied the space not as anxious women but as confident members of a joint action. Women leaned back on the railings, looking passersby right in the eye, lounging in public, and enjoying the feeling of occupying public space as watchers rather than as the watched. When small crowds began to gather, other volunteers handed out pamphlets describing street sexual harassment as a serious offense and engaging in conversations around the experience of it.

Volunteers are called “action heroes,” “sheroes,” or “theyroes”—those who actively subvert the dominant experience of being harassed to question, engage, and subvert expected ways in which gendered bodies occupy public spaces. More recent interventions engender conversations around public space. In one intervention, “Talk to Me,” volunteers ventured into a dark stretch of road that was locally termed “Rapist’s Lane.” Here they set up tables and invited passersby to stop and chat with them. Participants across socioeconomic class, caste, and gender affiliations were able to move beyond stereotypes of each other to actually converse; each interaction ended with the Blank Noise volunteer offering their guest a rose. The aim was to reshape “Rapist Lane” into “Safest Lane” through respectful conversation and interaction.

Currently Blank Noise is working on “I Never Ask for It,” a project ongoing since 2004 in which they invite people to share clothes that they wore while being harassed along with a brief note. All kinds of clothes have been collected over the years toward a final exhibit, intended as a massive material testimony to the widespread prevalence of harassment and evidence that it is not attire that invites unwanted attention. People are invited to bring the clothes they wore when harassed or abused, and these “garment testimonials” represent violations across spaces of home, street, and work. Through “I Never Ask for It” Blank Noise intends to put an end to the consistent use of victim blaming in sexual assault.

Blank Noise is volunteer driven and supported online at blanknoise.org. 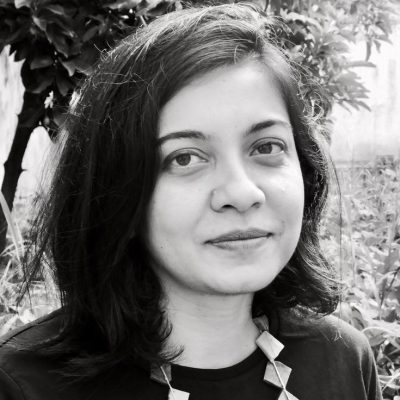 Hemangini Gupta is a visiting assistant professor in gender, sexuality, and feminist studies at Middlebury College. She has a PhD in women’s gender and sexuality studies from Emory University, and her writing has been published in Feminist Review, Feminist Media Studies, the Journal of International Women’s Studies, and in the edited anthology Gender: Love. Prior to her PhD, she was a national print and TV journalist in India and currently curates public humanities exhibits to expand the reach of academic research.

Gendered Lives by Hemangini Gupta is licensed under a Creative Commons Attribution 4.0 International License, except where otherwise noted.