Previously, we have tested hypotheses about two population means. This chapter examines methods for comparing more than two means. Analysis of variance (ANOVA) is an inferential method used to test the equality of three or more population means.

A treatment (or factor) is a property, or characteristic, that allows us to distinguish the different populations from one another.

It would be tempting to test this null hypothesis H0: µ1= µ2= µ3 by comparing the population means two at a time. If we continue this way, we would need to test three different pairs of hypotheses:

In the previous chapter, we used a two-sample t-test to compare the means from two independent samples with a common variance. The sample data are used to compute the test statistic:

is the pooled estimate of the common population variance σ2. To test more than two populations, we must extend this idea of pooled variance to include all samples as shown below:

where Sw2 represents the pooled estimate of the common variance σ2, and it measures the variability of the observations within the different populations whether or not H0 is true. This is often referred to as the variance within samples (variation due to error).

If the null hypothesis IS true (all the means are equal), then all the populations are the same, with a common mean μ and variance σ2. Instead of randomly selecting different samples from different populations, we are actually drawing k different samples from one population. We know that the sampling distribution for k means based on n observations will have mean μx̄ and variance σ2/n (squared standard error). Since we have drawn k samples of n observations each, we can estimate the variance of the k sample means (σ2/n) by

Consequently, n times the sample variance of the means estimates σ2. We designate this quantity as SB2 such that

where SB2 is also an unbiased estimate of the common variance σ2, IF H0 IS TRUE. This is often referred to as the variance between samples (variation due to treatment).

Under the null hypothesis that all k populations are identical, we have two estimates of σ2 (SW2 and SB2). We can use the ratio of SB2/ SW2 as a test statistic to test the null hypothesis that H0: µ1= µ2= µ3= …= µk, which follows an F-distribution with degrees of freedom df1= k – 1 and df2 = N – k (where k is the number of populations and N is the total number of observations (N = n1 + n2+…+ nk). The numerator of the test statistic measures the variation between sample means. The estimate of the variance in the denominator depends only on the sample variances and is not affected by the differences among the sample means.

Tables are a convenient format for summarizing the key results in ANOVA calculations. The following one-way ANOVA table illustrates the required computations and the relationships between the various ANOVA table elements.

The sum of squares for the ANOVA table has the relationship of SSTo = SSTr + SSE where:

An environmentalist wanted to determine if the mean acidity of rain differed among Alaska, Florida, and Texas. He randomly selected six rain dates at each site obtained the following data:

Notice that there are differences among the sample means. Are the differences small enough to be explained solely by sampling variability? Or are they of sufficient magnitude so that a more reasonable explanation is that the μ’s are not all equal? The conclusion depends on how much variation among the sample means (based on their deviations from the grand mean) compares to the variation within the three samples.

The grand mean is equal to the sum of all observations divided by the total sample size: 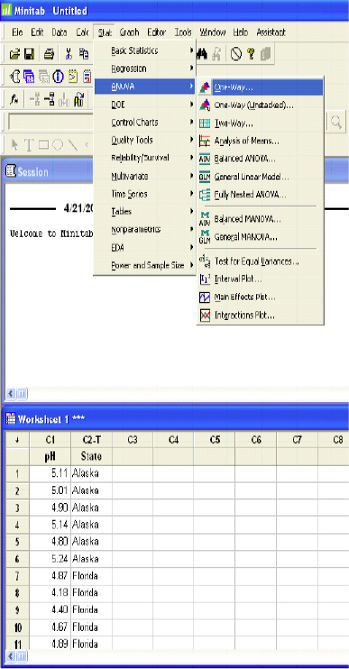 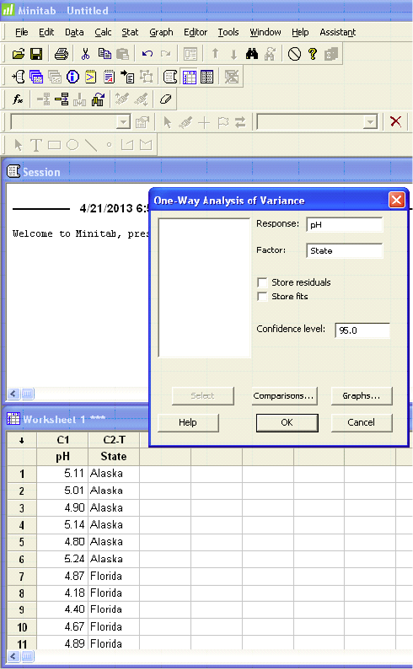 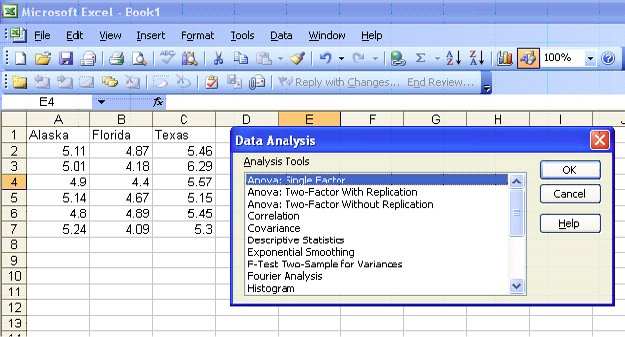 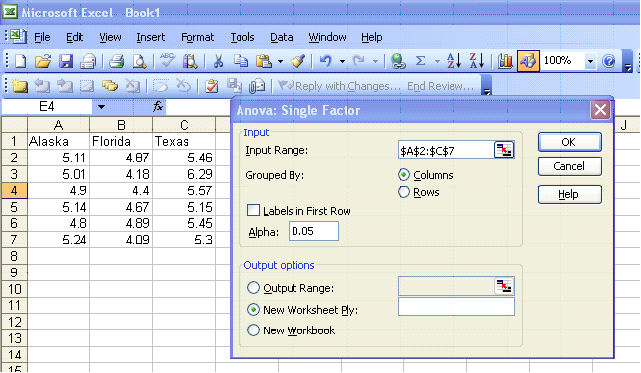 The p-value (0.000229) is less than alpha (0.05) so we reject the null hypothesis. There is enough evidence to support the claim that at least one of the means is different.

Once we have rejected the null hypothesis and found that at least one of the treatment means is different, the next step is to identify those differences. There are two approaches that can be used to answer this type of question: contrasts and multiple comparisons.

Contrasts can be used only when there are clear expectations BEFORE starting an experiment, and these are reflected in the experimental design. Contrasts are planned comparisons. For example, mule deer are treated with drug A, drug B, or a placebo to treat an infection. The three treatments are not symmetrical. The placebo is meant to provide a baseline against which the other drugs can be compared. Contrasts are more powerful than multiple comparisons because they are more specific. They are more able to pick up a significant difference. Contrasts are not always readily available in statistical software packages (when they are, you often need to assign the coefficients), or may be limited to comparing each sample to a control.

Multiple comparisons should be used when there are no justified expectations. They are aposteriori, pair-wise tests of significance. For example, we compare the gas mileage for six brands of all-terrain vehicles. We have no prior knowledge to expect any vehicle to perform differently from the rest. Pair-wise comparisons should be performed here, but only if an ANOVA test on all six vehicles rejected the null hypothesis first.

It is NOT appropriate to use a contrast test when suggested comparisons appear only after the data have been collected. We are going to focus on multiple comparisons instead of planned contrasts.

In The Least Significant Difference Test, each individual hypothesis is tested with the student t-statistic. When the Type I error probability is set at some value and the variance s2 has v degrees of freedom, the null hypothesis is rejected for any observed value such that |to|>tα/2, v. It is an abbreviated version of conducting all possible pair-wise t-tests. This method has weak experiment-wise error rate. Fisher’s Protected LSD is somewhat better at controlling this problem.

Bonferroni inequality is a conservative alternative when software is not available. When conducting n comparisons, αe≤ n αc therefore αc = αe/n. In other words, divide the experiment-wise level of significance by the number of multiple comparisons to get the comparison-wise level of significance. The Bonferroni procedure is based on computing confidence intervals for the differences between each possible pair of μ’s. The critical value for the confidence intervals comes from a table with (N – k) degrees of freedom and k(k – 1)/2 number of intervals. If a particular interval does not contain zero, the two means are declared to be significantly different from one another. An interval that contains zero indicates that the two means are NOT significantly different.

Dunnett’s procedure was created for studies where one of the treatments acts as a control treatment for some or all of the remaining treatments. It is primarily used if the interest of the study is determining whether the mean responses for the treatments differ from that of the control. Like Bonferroni, confidence intervals are created to estimate the difference between two treatment means with a specific table of critical values used to control the experiment-wise error rate. The standard error of the difference is

Scheffe’s test is also a conservative method for all possible simultaneous comparisons suggested by the data. This test equates the F statistic of ANOVA with the t-test statistic. Since t2 = F then t = √F, we can substitute √F(αe, v1, v2) for t(αe, v2) for Scheffe’s statistic.

Tukey’s test provides a strong sense of experiment-wise error rate for all pair-wise comparison of treatment means. This test is also known as the Honestly Significant Difference. This test orders the treatments from smallest to largest and uses the studentized range statistic

Student-Newman-Keuls (SNK) test is a multiple range test based on the studentized range statistic like Tukey’s. The critical value is based on a particular pair of means being tested within the entire set of ordered means. Two or more ranges among means are used for test criteria. While it is similar to Tukey’s in terms of a test statistic, it has weak experiment-wise error rates.

Bonferroni, Dunnett’s, and Scheffe’s tests are the most conservative, meaning that the difference between the two means must be greater before concluding a significant difference. The LSD and SNK tests are the least conservative. Tukey’s test is in the middle. Robert Kuehl, author of Design of Experiments: Statistical Principles of Research Design and Analysis (2000), states that the Tukey method provides the best protection against decision errors, along with a strong inference about magnitude and direction of differences.

Let’s go back to our question on mean rain acidity in Alaska, Florida, and Texas. The null and alternative hypotheses were as follows:

The p-value for the F-test was 0.000229, which is less than our 5% level of significance. We rejected the null hypothesis and had enough evidence to support the claim that at least one of the means was significantly different from another. We will use Bonferroni and Tukey’s methods for multiple comparisons in order to determine which mean(s) is different.

All three states have significantly different levels of rain pH. Texas has the highest rain pH, then Alaska followed by Florida, which has the lowest mean rain pH level. You can use the confidence intervals to estimate the mean difference between the states. For example, the average rain pH in Texas ranges from 0.5262 to 1.5138 higher than the average rain pH in Florida. 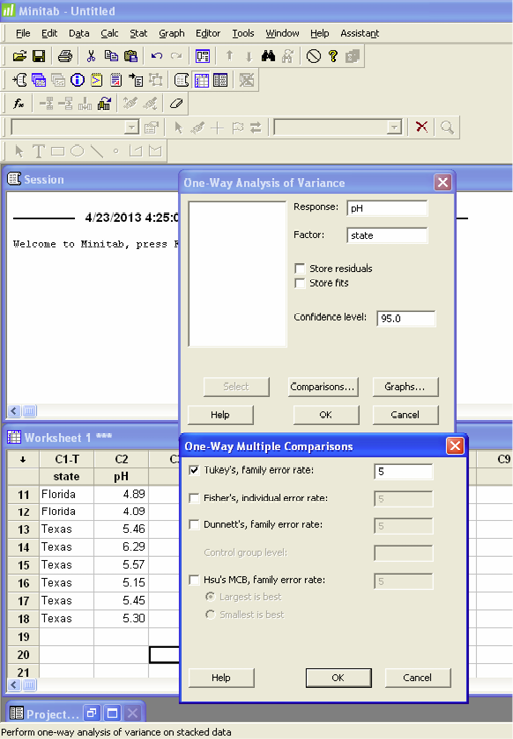 We have seen this part of the output before. We now want to focus on the Grouping Information Using Tukey Method. All three states have different letters indicating that the mean rain pH for each state is significantly different. They are also listed from highest to lowest. It is easy to see that Texas has the highest mean rain pH while Florida has the lowest.

The intervals are similar to the Bonferroni intervals with differences in width due to methods used. In both cases, the same conclusions are reached.

When we use one-way ANOVA and conclude that the differences among the means are significant, we can’t be absolutely sure that the given factor is responsible for the differences. It is possible that the variation of some other unknown factor is responsible. One way to reduce the effect of extraneous factors is to design an experiment so that it has a completely randomized design. This means that each element has an equal probability of receiving any treatment or belonging to any different group. In general good results require that the experiment be carefully designed and executed.