Despite the great aesthetic variety we have seen in the preceding chapters, it is important to recall that the material discussed in this book is limited in scope: tonal Western art music represents just a tiny fraction of the human musical experience. There are many, many musical traditions to which the ideas discussed here do not directly apply. In the Western art music tradition alone, the theoretical concepts we have described are relevant to works produced mainly during a very brief historical period. More to the point, we may—without much effort—find many contradictions to these ideas, even in the works of the composers included in these pages.

The following example reproduces the image on the front cover of this book. It is taken from a four-part chorale setting by Johann Sebastian Bach, and is one of a body of similar compositions that are often considered to represent the backbone of Western polyphony. Note the diagonal lines highlighting the voice leading in the second to last measure: 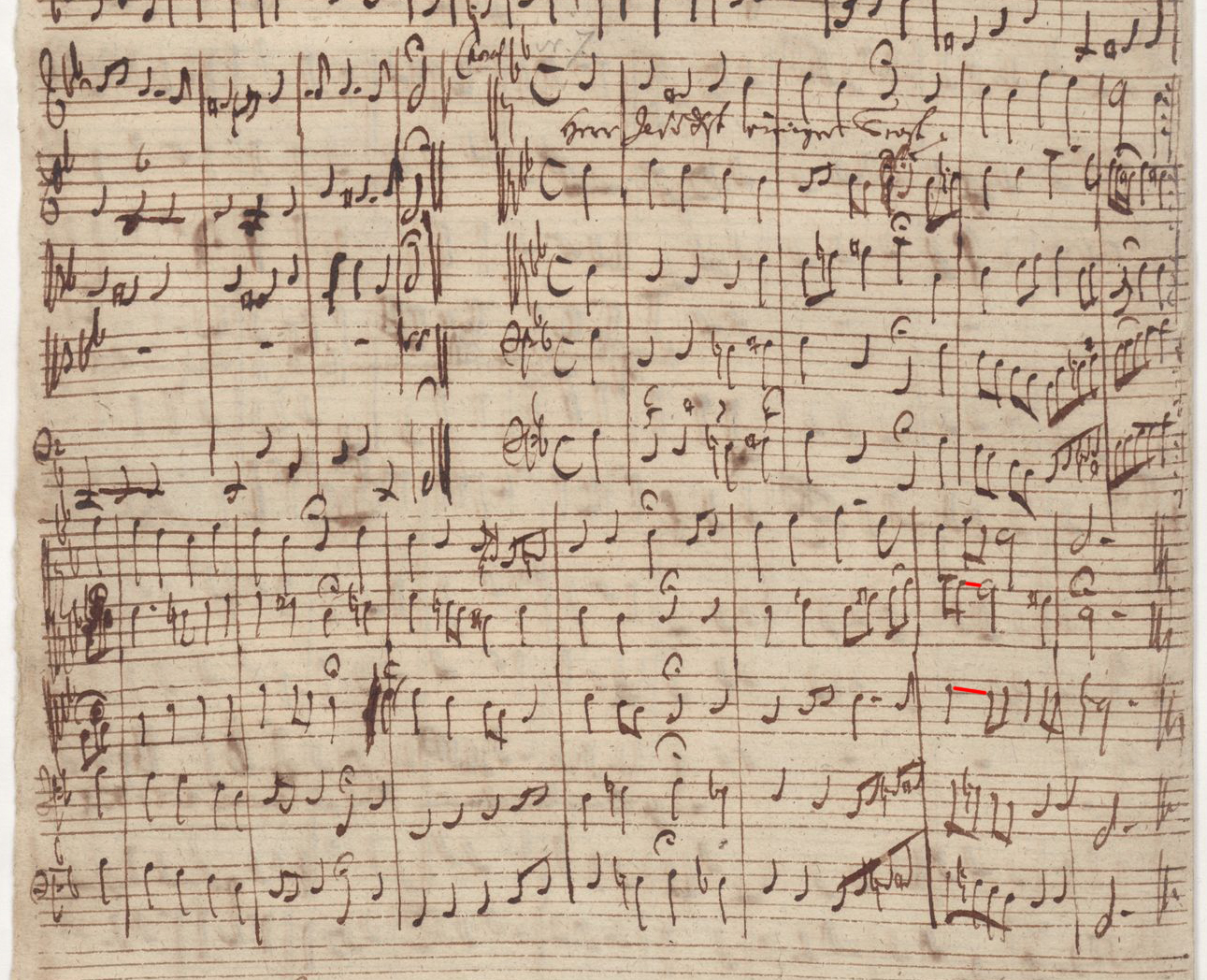 In m. 10, just before the final cadence, we hear the bass line stepping down through a G-minor scale in eighth notes. As the bass steps down, the alto does the same, creating a series of three parallel tenths: G/Bb–F§/A–Eb/G. At the same time, however, the tenor voice also steps down, in this case from D to C. The result is a pair of consecutive perfect fifths moving in parallel motion, one of the few interval progressions that nearly all tonal composers take great care to avoid. Music that does not “follow the rules,” so to speak, has been lurking nearby all along!

Now consider the following example from a set of keyboard variations by Charlotte Amalie Sachsen-Gotha-Altenburg:

Leading up to the final cadence in this passage, we find a common harmonic progression with a pre-dominant moving to a dominant prolonged by a cadential 6/4 that eventually resolves to a tonic triad in root position. In Chapter 23, we described the upper voices of a cadential 6/4 chord (scale degrees [latex]\hat1[/latex] and [latex]\hat3[/latex]) as non-harmonic tones that characteristically resolve down by step to form a diatonic dominant chord. Although the chords in this example are arpeggiated in the left hand, the voice leading seems to show both of these voices stepping up, defying the listener’s expectation for the chord to progress in the usual fashion!

The examples included in this book belong to a somewhat small group of compositions in tonal Western art music. These pieces and passages were selected to demonstrate a particular concept or convention as clearly as possible. In reality, however, music tends to be much messier. Recall from the introduction to this book that it is better to think of music theory as an attempt to find patterns in hindsight. The discipline represents the work of countless individuals trying to make sense of the music of the past and find connections between seemingly disparate works. The composers, for their part, were not necessarily working with these ideas in mind. The ideas discussed here, then, are not rules or laws that govern how music works—nor should they be used as criteria to pass value judgements on creative work. They represent one perspective on how we think historical practitioners understood their art. In your own creative endeavors you should feel free to draw inspiration from them or ignore them entirely as you see fit.

Fundamentals, Function, and Form by Andre Mount is licensed under a Creative Commons Attribution-NonCommercial 4.0 International License, except where otherwise noted.